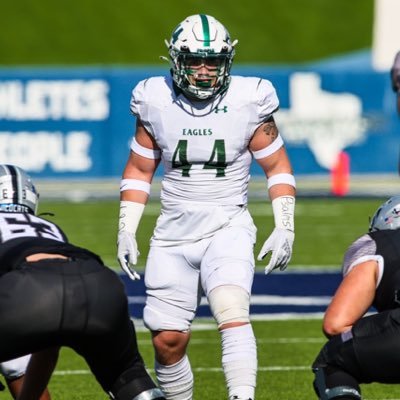 The vote for the 2020 defensive player of the year was one of our most interesting award votes.

In the nominee process, we had 6 nominees with the same exact amount of nominations, leading us to include 15 players in this poll.  From the start of the poll, Peyton Williams from Rockwall-Heath was leading by a large margin, followed by Kendrick Blackshire.  They stayed number one and two throughout the voting until the last day.

Williams went into the final day with over a 150 vote lead, but Aidan Siano came from near the bottom of voting and skyrocketed to a 150+ vote lead.  Williams fans responded by pushing Williams back within 50 votes, but then the Prosper football family made a huge push on the last evening of voting to secure Siano the award.

Aidan was named the 2020 District 5-6A Defensive Player of the Year.  He helped lead the Prosper Eagles to an 8-4 season in which they made it to the Regional Finals, where they lost in triple-overtime to Denton Guyer, 30-24.  He finished the season with 118 tackles, 24 tackles-for-loss, 4 sacks, and 1 interception.

Here is the final fan vote: