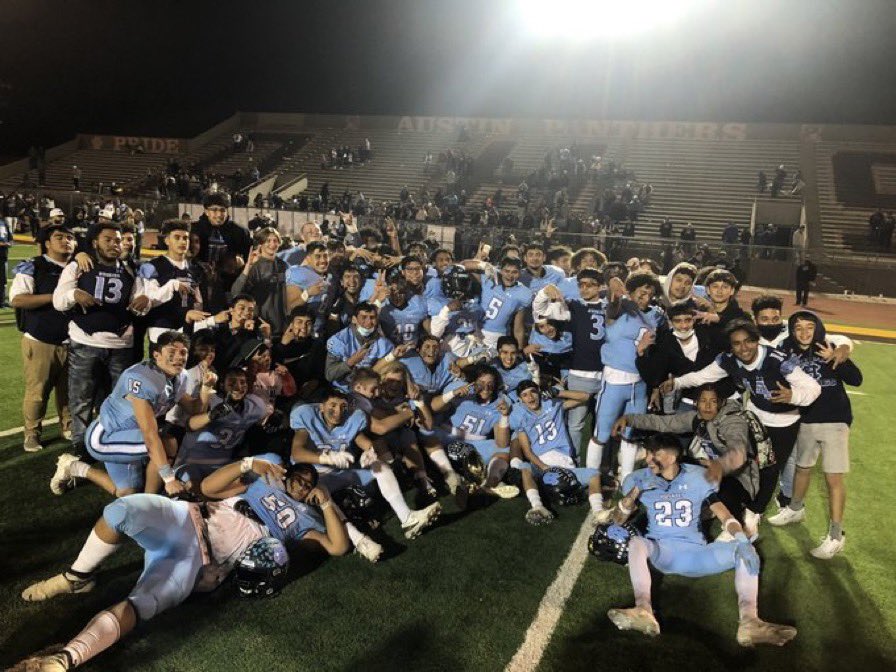 With just 50 seconds remaining in his team’s 2021 first round playoff game, El Paso Chapin head coach Ryan Warner called a timeout. Chapin had just scored a touchdown to cut its deficit to one point. Now, he wanted his players to have a say in his team’s most important decision of the season.

“I said, ‘You know guys, we can either kick this [PAT] and we can play for overtime, or we can go for two and we can win this thing,’” Warner said. “They all looked at me and said, ‘Coach, let’s go for the win.’”

That decision paid off handsomely as Chapin’s senior quarterback Mason Standerfer dumped a pass off to a wide-open Jacob Williamson for the conversion. The Chapin defense held strong and the Huskies secured their first playoff win in five years in a 29-28 victory over Amarillo Caprock.

Chapin Huskies go for 2 after touchdown and take the lead

Chapin also secured its first district title in six years last season, finishing with a 9-3 overall record. That marked a seven-win improvement from their 2-5 record in 2020. After being hired at his alma mater in Jan. 2020, Warner said the success of his Huskies is a dream come true.

“To me, it’s special,” Warner said. “[District championships are] exactly what I envisioned contending for when I accepted the job. [I envisioned] reestablishing our foothold and our traditions here locally of the success of the Chapin high school football program.” 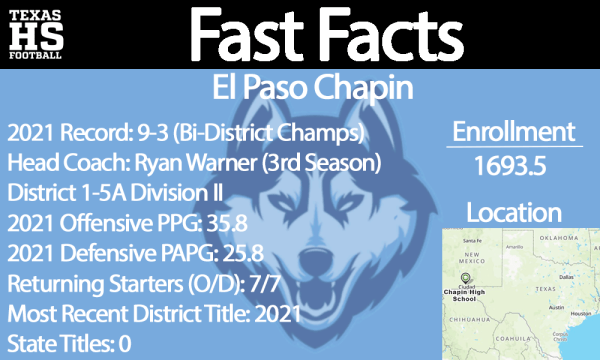 Now the trick will be building off of last year’s success. Chapin has been to the third round of playoffs just three times in its 18-year history, the last time occurring back in 2009. Warner said the aim for his current team should be breaking into the deeper rounds of playoffs.

This season, the Huskies have seven starters back on each side of the ball to help seek out that goal.

The most notable of those returning starters is senior Anthony Rivera. He had 1,154 receiving yards and 18 touchdowns last season along with six interceptions from his defensive back position. And even though receiver is his primary position, he is willing to do whatever it takes to help his Huskies win.

“He’s a special two-way player, one of the best in the area at receiver,” Warner said. “[And] when we told him, ‘We’re going to need you to play some defense this year,’ he just had a big smile on his face and bought into the idea. He’s just a tremendous kid on and off the field.”

Elsewhere offensively, the Huskies have a big hole to fill at quarterback as they must replace two-year starter Mason Standerfer (2,884 passing yards, 41 passing touchdowns in 2021). Warner said rising sophomores Evan Rivera, Anthony younger brother, and Ayden Quinn are currently battling for the position.

Elsewhere, at the skill positions, running back Zach Ortega (227 rushing yards) is back, while Warner said he is expecting a breakout year from sophomore Savion Jordan. And up front, the offensive line returns four out of five starters to help protect the new Chapin quarterback.

Warner said having that experience in the trenches will be crucial.

“I do expect them to carry the load, and help our offense through those tough situations and really fight for tough yardage and downs,” Warner said of his offensive line.

Defensively, linebacker will be a strength for the Huskies as last season’s leading tackler Nick Purnell (100 tackles, 13 TFLs) returns alongside Gio Aguilar (30 tackles), who Warner is expecting a big year from.

In the secondary, junior Justin Yhisreal is back for the Huskies as is Dylan Sims, who had three interceptions as a sophomore a year ago. And when it comes to the defensive line, junior Jovanie Barrios (53 tackles, 6 TFLs) and senior Eduardo Licon (62 tackles, 5 TFLs) are expected to lead the way for Chapin.

With plenty of talent back, Warner is expecting big things out of his defense this season.

“I expect them to further improve through the spring and be comfortable within the system we’re running,” Warner said. “We’re going to have a special group on defense.”

District play will look a lot different for Chapin this year as it drops down to 5A Division II for this alignment. Two of Chapin’s three losses last year came against Andress and Canutillo, who will now be district foes for the Huskies along with El Paso, Burges, and Jefferson. Every team but El Paso was a playoff team a year ago. All told, competition will be fierce in 1-5A Division II.

“I think it is a very talented district,” Warner said. “It’s really going to put our offseason, summer strength and conditioning, and everything we’re doing to the test.”

Great way to finish Spring Ball under the Lights yesterday 🏈 Back to work for the summer 😤 #HuskyFamily #HuskyNation pic.twitter.com/PTP75YP8jE

Warner said Chapin will continue to have the goals of winning a district title and hosting a first-round playoff game. Those preseason objectives will certainly be put to the test in this new realignment.

But for Warner, the most important word for his Husky program is consistency. He believes that’s what can give Chapin an edge over the rest of the pack this season.

“With this team, it’s the consistent message of discipline and [being] detail-oriented,” Warner said. “I think that’s what’s going to separate us from a lot of the teams that we’re going to face.”