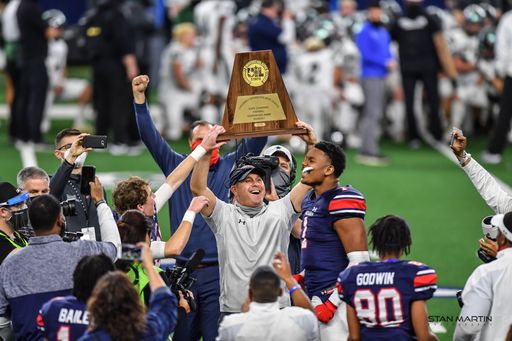 Denton Ryan completed its quest to go wire-to-wire as the best team in Class 5A Division I Friday night following a 59-14 shellacking of Cedar Park at AT&T Stadium.

The Raiders (15-0), who were denied a state title in 2019, took out all of their pent-up frustrations on the Timberwolves (13-1), who rallied to within 10-8 in the second quarter before falling by the wayside.

Ryan struck for 35 points in a row to turn the tide and intercepted Cedar Park quarterback Ryder Hernandez twice in the game. Hernandez had only thrown two picks the entire year coming into Friday’s title matchup.

The Raiders were clinical in their attack, passing for 264 yards and rushing for 263 in a perfect display of balance. In the end, Ryan proved it was simply the better team.

“It’s awesome,” Ryan head coach Dave Henigan said. “We’ve been so close for so long and I’m so proud of our kids. They played hard and played well. Our coaching staff came up with a great plan. Everybody knows we’re talented, but what they don’t know is how hard our kids play and how coachable they are and how they go to work every day. I couldn’t be prouder that we got an opportunity to bring another trophy back to Southeast Denton.”

Henigan’s son, quarterback Seth Henigan, was named the game’s Offensive MVP after completing 14 of his 22 pass attempts for 264 yards and four touchdowns. The senior’s first passing score came on a 52-yard strike to Keagan Cunningham as the Raiders stretched their lead to 17-8.

Ryan added four more scores to bury Cedar Park under an avalanche of offense. Seth Henigan found Billy Bowman Jr. for a 37-yard TD connection, and Anthony Hill Jr. tallied a 2-yard scoring run to increase the Raiders’ lead to 24-8 at the half.

MarQuice Hill Jr. came up with a defensive gem early in the third quarter, as he recovered a fumble for a 1-yard TD. Ryan then saw Michael Davis haul in a 29-yard scoring throw from Seth Henigan to take a 45-8 advantage.

The Timberwolves saw Hernandez find Cade Haught for a 9-yard TD on Cedar Park’s next drive, but the Raiders were undaunted and tacked on two more scores in the final stanza. Ja’Tavion Sanders dragged his foot in bounds to record a 5-yard TD reception with 11:45 left to play and Keori Hicks crossed the goal line on a 5-yard run with 5:41 remaining.

From there, the Raiders were content to bleed the clock and begin their celebration.

“Throughout the year, we just worked really hard and it showed on the biggest stage of high school football,” Seth Henigan said.

The Raiders’ Ty Marsh was the recipient of the Defensive MVP award after he made an interception, blocked a PAT, forced a fumble and also recovered one. Marsh stripped the ball away from Cedar Park’s Josh Cameron to end a promising drive for the Timberwolves in the first half.

Ryan’s championship was the third in program history and its first since the 2002 season.

“We have a high-character team and we have unbelievable senior contributions,” Dave Henigan said. “When your best, most talented players are also your best leaders, you’ve got a chance to do something special.”