Jonesboro Soars Past Leakey Into Area Round 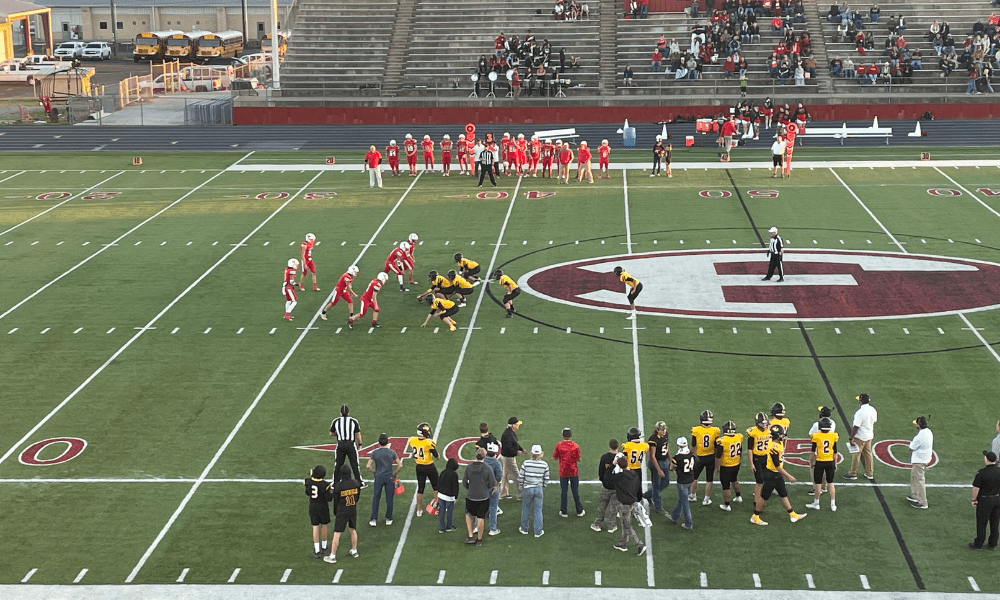 In a battle of Eagles, Jonesboro (11-0) soared past Leakey 90-40 to maintain its undefeated record on the season and clinch its third-straight six-man bi-district victory on Thursday night in Fredericksburg.

Senior running back and safety Ian Shoaf led the charge for Jonesboro as he finished with 128 yards rushing and four total touchdowns, including a defensive scoop-and-score in the second quarter.

“He’s a guy that we expect to have big plays and be a consistent player for us,” Jonesboro head coach Eddie Gallegos said. “He works hard. He’s a great leader for us and a great teammate. I’m just happy for him and proud of him.”

Meanwhile, Leakey head coach Kurt Nichols said his team knew that Jonesboro would be a tough matchup and pointed to his team’s three turnovers as a key difference in the game.

“We fought, but we made too many mistakes,” Nichols said. “I got to give it to [Jonesboro]. They forced a lot of our mistakes. We did some good things; we moved the ball. We just should have been more consistent.”

Despite the final scoreline, the game was tight early on.

Garcia was a busy man on the night for Leakey as he finished with 127 yards passing, 77 yards rushing, and three catches for 26 yards.

“He’s tough; he does good things on both sides of the ball,” Nichols said. “Roger kept fighting hard. He’s probably going to end up being an all-state fullback. He does so many things well.”

After Garcia’s touchdown, Caleb Christel answered for Jonesboro on a 4-yard touchdown run. But yet again, Leakey answered right back as Daymien Galindo scampered in from seven yards out on a beautifully designed reverse to cut Jonesboro’s advantage to 16-13 heading to the second quarter.

Jonesboro began to pull away as the second quarter began as it delivered back-to-back-to-back blows in just 37 seconds of game time. First, Jacob Cisneros lobbed a pass to Zach Chapman for a 29-yard score. Next, Demarcus Acoff forced a Leakey fumble, which led to a 25-yard touchdown pass from Christel to a wide-open Nat Hilliker on the very next play to put Jonesboro up 32-13.

Christel had an impressive night himself as he finished with 87 rushing yards, 32 passing yards, and four total touchdowns.

After Jonesboro’s 37 seconds of dominance, Abel Montoya got one back for Leakey on its next drive as he danced around Jonesboro defenders on a nine-yard rushing touchdown, but Shoaf stopped all of Leakey’s momentum in its tracks just a few minutes later as he returned a fumble by Roger Garcia 29 yards for the score to give Jonesboro a 38-21 lead heading into halftime.

The second half started off with some fireworks as the teams traded touchdowns in the opening 70 seconds as a two-yard touchdown run by Shoaf was countered by a 78-yard kickoff return touchdown by Leakey’s Rey Rodriguez.

After that, Jonesboro went on another big run as Shoaf scored on a 17-yard run, Manuel Torres scored on a one-yard dive, and Christel found paydirt from two yards out to propel Jonesboro to a 68-27 lead heading into the fourth quarter.

In the final period, Garcia worked some more magic for Leakey as his last-ditch forward toss to Rodriguez resulted in an 11-yard touchdown.

Jonesboro was unfazed and responded as Garrett Young got in on the scoring action as he rolled out and found Acoff, who did a nice tight rope impression along the sideline to stay in bounds for the 18-yard score.

Garcia willed another touchdown out of his offense as he scored on a one-yard dive on the ensuing possession to cut the lead to 76-40 with five-and-a-half minutes to go, but Leakey’s fight to avoid being 45’d soon ran out of steam.

Christel added another touchdown from 12 yards out just a minute later before Chapman recovered a Leakey fumble to give Jonesboro the opportunity it needed to go and get the game-clinching score.

Torres did just that as he rumbled in from seven yards out to extend Jonesboro’s lead to 50, triggering six-man’s 45-point mercy rule with just a couple of minutes to go in the game.

Despite the lopsided loss, Nichols was proud of what his Leakey team achieved during his first year at the helm as they finished 6-4 on the season and made the playoffs for the fourth consecutive season.

“I got a good ball club; we played hard all year,” Nichols said. “We had a good year. I wouldn’t want to be any other place even though it was a tough loss tonight.”

For Jonesboro, the victory sets up a mammoth clash between two six-man powerhouses as the Eagles will go head-to-head against the May Tigers next week. May is also 11-0 and finished as the state runners-up last year.

“We just need to continue doing what we’ve been doing,” Gallegos said. “When you get to the playoffs, everyone is pretty dang good, so when the opportunity is there to make a play, we got to make it.”