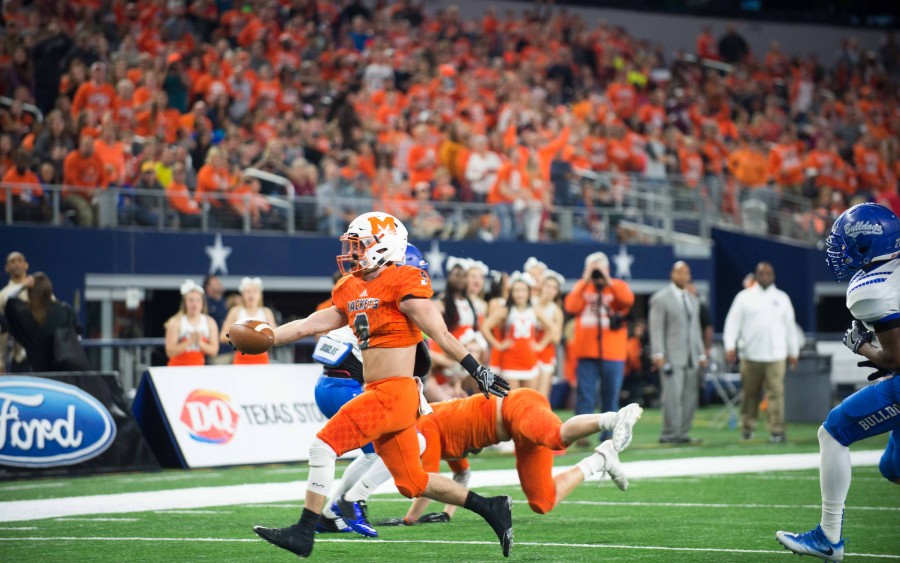 Mineola was able to thwart Yoakum’s state championship dream as the Yellowjackets defeated the Bulldogs 35-14 to capture their first 3A Division I State Title in the final Thursday game inside AT&T Stadium.

For the first half of this game it was a battle of will and want as both teams fought for the slightest advantage against one another. Both teams exchanged scoring drives throughout the first half.

Mineola’s first scoring drive began with a 10-play drive to open up the game that ended in a 1-yard touchdown run from Jeremiah Crawford. Yoakum responded with an 11-play drive as Henry Enoch found Jordan Moore for the 25-yard touchdown pass.

Mineola (14-2) started the second quarter off with a touchdown from Chantz Perkins but Yoakum (11-5) would once again tie the game. Before intermission, Mineola would score once more as Jeremiah Crawford trotted his way to the end zone for a 40-yard touchdown bringing the score at half to 21-14.

From there it would be all Mineola, as they scored two more touchdowns to rattle of 21 unanswered points that left Mineola with a sizeable 35-14 lead.

Yoakum was down to their last couple of breaths, driving and facing an uphill 35-14 battle in the fourth quarter. With a 2nd & 9 on the Mineola 49, quarterback Bryson Hagan threw a ball that was intercepted by Mineola defender Cameron Sorenson with 6:13 left in the game. That interception would put a cap on the rest of the night.

Mineola head coach Joe Drennon was elated for his players and the supporting fans as he described how appreciative he was of the support the team received this week. “Its been awesome all week long, its been hard to have school this week. Whatever we needed to do to win this thing is what they allowed us to do. I want to thank my superintendent for that cause its been an unbelievable week and an unbelievable journey to get here. Its been nothing but support from our crowd. Our community always supports us, they love these kids.”

Now, with Coach Drennon redeeming the 2014 season and capturing the first title for Mineola, he was able to reflect on what this means to the community and to the group of boys that established a legacy.

“It’s a great group of kids I promise you. They brought a lot of recognition to our school and our district and they’re going to be remembered for a long time. They made their mark tonight and it’s something to be proud of that they’ll always be able to come back to and they’ll always be a hero in Mineola.”