No. 1 linebacker in the DFW, Kendrick Blackshire, commits to Alabama 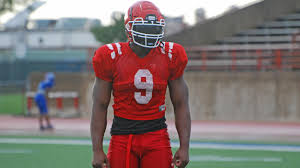 Duncanville four-star recruit Kendrick Blackshire announced his commitment to Alabama on Tuesday evening via Twitter on what was his late grandmother’s birthday:

I’m committing today because my mom came to me when I was about to commit on the 4th and she asked if I could commit on her moms birthday who died when she was 9 years old I said of course immediately ❤️🥺 @CoachGolding @CoachJeffBanks @tm151621 @AlabamaFTBL pic.twitter.com/bGekFP50af

Blackshire is widely considered the best linebacker in the Dallas area even after missing all of his junior season with a torn ACL. The 6-foot-2 athlete transferred to Duncanville from Mesquite Horn.

As one of the most sought after recruits in the state, Blackshire holds 29 offers from programs like defending national champion LSU, Texas A&M, Arkansas, Auburn, Baylor, Michigan, North Texas, and more.

Duncanville finished as the Class 6A Division I state runner-up with a 15-1 record in the 2019 season. Should the 2020 season happen, Duncanville’s defense will feature three Area Top 100 players with Blackshire, three-star safety Jadarius Thursby (SMU commit), and three-star defensive lineman Kevon Ivy.

The four-star recruit shared a highlight video of his sophomore season on Twitter in December:

Alabama has won four national titles in the last 10 years.