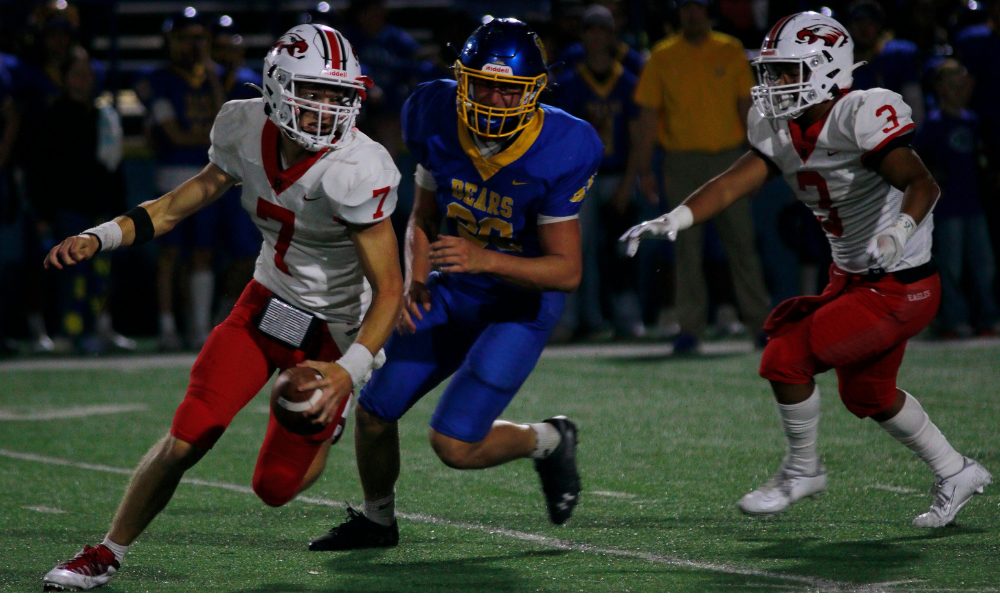 The Rusk Eagles came into the game at Brownsboro undefeated at 4-0 and had scored 58 points last week against Bullard. The Eagles kept up the pace, scoring 55 points against the Bears in a 55-41 win on Friday Night.

The scoring started in the 1st quarter on a 10-yard TD pass from McCown. The Eagles converted the PAT and the score was 7-0.

In the 2nd quarter, McCown threw a 44-yard TD pass to Aiden McCown for his 2nd TD pass of the half. After converting the point after attempt, the score was 14-0.

Elijah Ward was the recipient of McCown’s third TD of the first half. This time the extra point was blocked and Rusk led 20-0.

Brownsboro then drove the length of the field for their first touchdown of the game as Kyle Nichols ran it in from the one-yard out. The Bear converted the PAT and the score was 20-7.

McCown threw his fourth TD pass of the first half to Heston Kelly to increase their lead to 27-7 at halftime.

Nine touchdowns were scored in the second half, with Brownsboro scoring five of those. McCown threw two more TD passes to give him six for the game and scored on a 63-yard run.

Rojo converted on two extra points and Ward returned an interception 55 yards for a pick-six.

As for Brownsboro, Nichols scored on another touchdown run. QB Jaxyn Rogers added a short touchdown run and he also threw TD passes of 61 and 53 yards to WR Gekyle Baker.

RB Payton Stephenson scored on a 64-yard run for a score.

Outstanding play for the Bears on defense came from Aiden Hardin, Logan McKinney, and Nichols. Defensively, the Eagles were led by Caleb Ferrara and Jordan Anderson.