Todd Dodge-The Player and the Coach 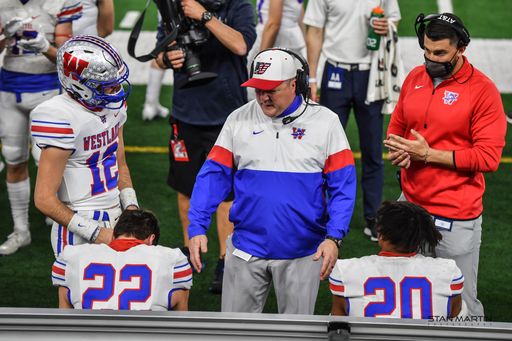 He was the first Texas high school quarterback to throw for more than 3000 yards in a season. He is Todd Dodge of Port Arthur Jefferson.

Dodge was named the District Offensive Player of the Year in 1979 and led Class 4A after passing for 2094 yards and 30 touchdowns.

As a senior in 1980, he led the Yellowjackets to a 14-0. He passed for 3135 yards and 30 touchdowns. Dodge was named District Offensive Player of the Year, 4A All-State, and a Parade All-American.

The Yellowjackets earned a spot in the 4A State Championship Game against Odessa Permian, where they lost 28-19. Dodge set state records for completions in a career (382) and in a single season (221).

He signed to play college ball at the University of Texas for head coach Fred Akers. As a freshman in 1982, Dodge got his first start as a freshman in the Sun Bowl, going 6 of 22 for 50 yards. Dodge led the Longhorns to bowl appearances in 1983 and 1984.

After several stops in the coaching ranks, Dodge landed at Southlake Carroll High School at the beginning of the new millennium.

He also coached against some pretty good quarterbacks as well, like Andy Dalton (Katy-TCU) and Nick Foles (Austin Westlake-Arizona).

The Dragons went 16-0 and faced off against Smithson Valley in the 6A title game. QB Chase Wasson threw for 490 yards and 5 touchdowns in a 45-14 win.

After losing out on the state championship by one point in a loss to Katy in 2003, Dodge led the undefeated (16-0) Dragons into the 6A title game once again, with QB Chase Daniel calling the signals under center.

Against a familiar opponent in Smithson Valley, Daniel rushed for 84 yards and passed for 295 yards and a touchdown for a narrow 27-24 win.

Coach Dodge kept up his winning ways with yet another undefeated team (16-0). The next man up at the quarterback position was Greg McElroy as he led the Dragons into the 6A title game against Katy, led by QB Andy Dalton.

McElroy won the battle of the quarterbacks, throwing for 328 yards and four touchdowns in a 34-20 win.

All in the family was the theme in ’06 with the elder Dodge coached his quarterback son Riley to another undefeated season (16-0) and another appearance in the 6A title game, this time against QB Nick Foles and Austin Westlake.

Riley passed for 303 yards and three touchdowns in a 43-29 win and their third consecutive state title.

Dodge amassed a 98-11 coaching record with the Dragons.

Dodge led Austin Westlake to a 15-1 record and the 6A state championship game against Denton Guyer. Chaparrals QB Kirkland Michaux threw for 285 yards and 3 touchdowns and an INT in a 24-0 win. Just another day at the office for Coach Dodge.

In a COVID-19 impacted season, Dodge managed to coach yet another undefeated season (14-0). The Chaps would face off against a familiar foe in Southlake Carroll and a familiar name on the other sideline. The Dragons head coach is Riley Dodge, Todd’s son.

But Westlake was ready to play, outscoring Southlake Carroll 17-0 in the 3rd quarter on their way to a 52-34 victory. The Dragons were held to just 50 yards rushing for the game.

Klubnik was named the Offensive MVP of the game.

Todd Dodge has an 88-13 record at Austin Westlake.

Todd Dodge comes into the 2021 season with a 217-72 overall coaching record and six state championships.

He announced earlier this year that he will retire from coaching after the completion of the 2021 season.

He was inducted into the Texas High School Football Hall of Fame in 2006.