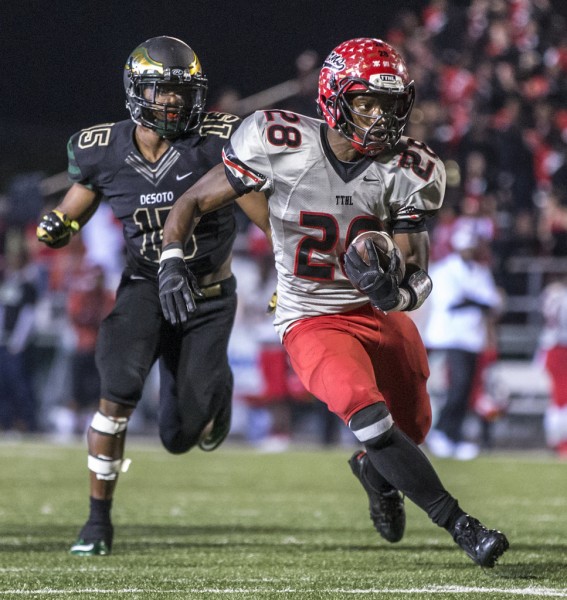 To have a top tier program that is constantly in the running for a UIL state title in any district creates that mark on the calendar for opposing schools. Everyone in the district will look to match up against what is deemed the best team in the district and possibly the state. Though the mentality is usually to take care of the opponent on the schedule it’s hard to not anticipate a matchup against a powerhouse program. Now when there are two possible state title contenders within the same district, well that is just something for the eyes to behold.

Enter District 7-6A, home of the Cedar Hill Longhorns and the DeSoto Eagles.

Cedar Hill was ranked number five by USA Today High School Sports in their Super 25 Preseason Football poll. SportsDayHS ranked them as number one in their Preseason Class 6A area rankings. The Longhorns have claimed state titles in 2006, 2013 and 2014 and the annual state contenders usually validate those polls with deep playoff runs every year.

Last year Cedar Hill had a surprising first-round exit when they were edged out by Southlake Carroll in a 37-33 loss. Prior to that loss Cedar Hill had played in 18 playoff games over the course of three years which included three straight state title game appearances.

Coach Joey McGuire has 10 starters on offense and six starters on defense returning from a squad that went 9-2 in 2015. Names like quarterback Avery Davis, a Notre Dame commit, wide receivers Camron Buckley, a Texas A&M commit, and Jaylon Jackson, a Colorado commit, headline an offensive juggernaut. Defensive end Deven Lamp committed to Iowa State and linebacker Dimitri Moore anchor the defensive side of the ball. 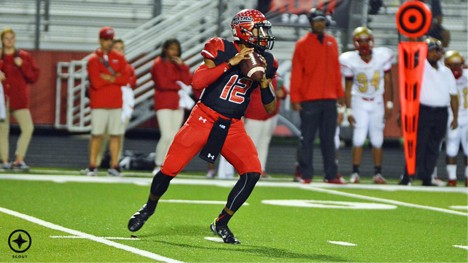 DeSoto enters this year with a bevy of talent and perhaps the biggest chip on anyone’s shoulder in 6A football. DeSoto has yet to capture its desired state championship. In most preseason rankings you can usually find DeSoto right behind them if not immediately. SportsDayHS ranked them second in their preseason rankings.

DeSoto had a 6-6 season, but it has been documented how much talent is available in their holster. DeSoto is a team on the fringe of its first state title, but their only problem is the hump created by the Allen Eagles. DeSoto has lost to Allen for four consecutive years in the playoffs including two consecutive losses against them in the state semis in 2012 and 2013.

In Todd Peterman’s sophomore effort he will have six starters from the offense and defense returning. The offensive line could be arguably the best in state with Hyrin White, committed to Missouri, Xavier Newman, committed to Texas, and Edward Ingram, a LSU commit, leading the fight in the trenches. Let’s not forget Denton Guyer transfer and one of the top quarterbacks in the state and TCU bound Shawn Robinson lining up as the signal caller for the offense. Senior K.D. Nixon is the X-factor for the special teams that can easily wreak havoc for opposing kicking and punting units. 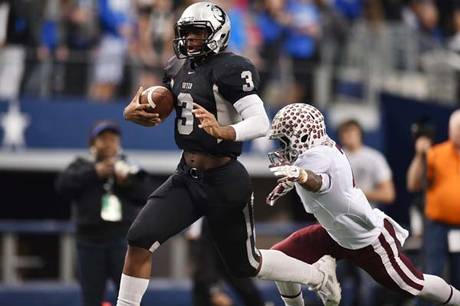 In last year’s matchup between the two, Cedar Hill won decidedly 26-2. So will Cedar Hill be able to beat their regional rival in this year’s “Battle of the Belt” on September 23rd?

The writers at TexasHSFootball composed a list of their 6A Power Rankings for Week One and Desoto claimed the No.1 spot and Cedar Hill came in at No.3. Mind you this is for the first week so anything can happen up until the date when Cedar Hill and DeSoto come together for what should a great matchup.

My pick for the district matchup between these two powerhouses? I am going with DeSoto. DeSoto’s path to a state title has been an arduous journey filled with constant barriers (namely Allen). In order for DeSoto to breakthrough their playoff barrier a crucial district matchup victory over Cedar Hill will set the tone for them come the rest of the season and into the playoffs. DeSoto has the biggest chip on their shoulder and DeSoto will look to begin their journey with a victory over Cedar Hill.