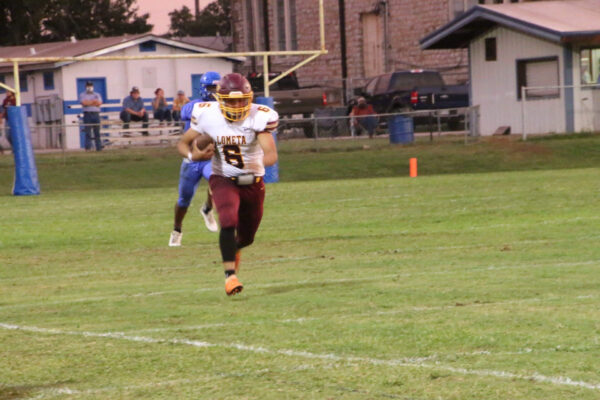 When the Lometa Hornets visited the Cherokee Indians Thursday night, there were expectations of a fast-paced, high scoring affair. Both teams stalled on their opening drives, but Lometa opened the scoring with just over a minute left in the first quarter.

Cherokee would respond late in the second, but any momentum they might have garnered was short-lived, following a 46-yard touchdown by Lometa’s Luis Hernandez, and a two play, 74-yard drive at the end of the first half to leave the score at 21-6 in favor of the Hornets. Lometa would never look back, scoring three more times and only surrendering one score in the second half, leading to our final score of 45-12 in favor of Lometa.

Alonso Caso and Enrique Prado led the offense, both rushing for over 150 yards, and tacking on 5 total touchdowns between the two. Dyllen Workmon led the defense with 17 tackles and a pass breakup, and Prado had 2 fumble recoveries. Lometa improved to 2-0 and will play Buckholts (0-2) next Friday in Lometa for senior night. Cherokee fell to 1-1 and will play Sidney (2-0).

To view the final scores of all Texas High School Football Games, visit:

UNT Looks to Bounce Back from a Four-Win Season: Five Texans to Watch in Denton this Season