Can Central Retain The Physicality And Explosiveness That Defined Them In 2016? 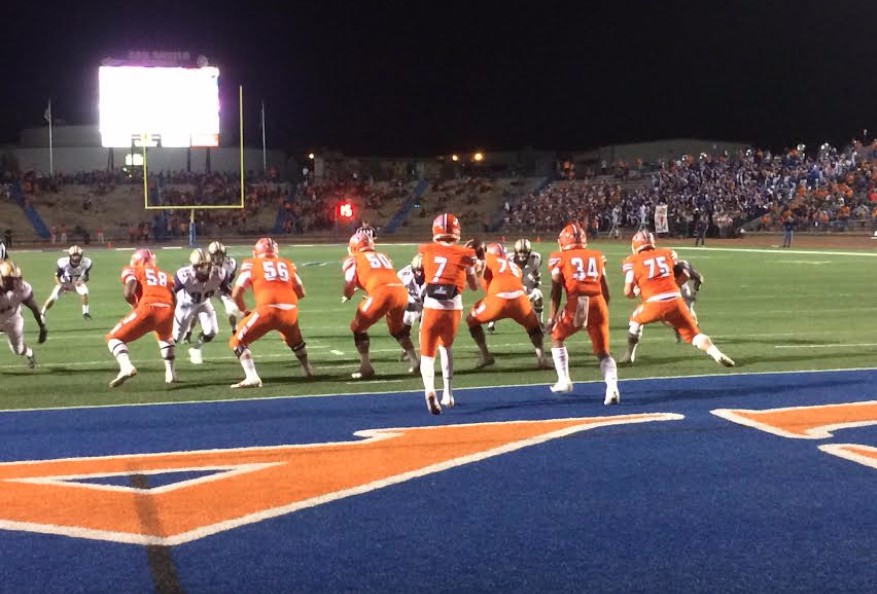 The Angry Orange just had one of their best seasons in recent memory. They went 12-1, and were undefeated before a literal downpour and a fantastic Allen rushing attack put an end to their title dreams. Central loses a lot of seniors, but the talent they develop this year could mean more high win totals for the Bobcats in the future.

In order to put Central’s 2016 season to rest, we need to talk about the Allen game, and a frustrating series of circumstances.

First, the weather. Central opted to flip a coin for a home-and-home, and they won. They flipped a coin again, and got to play at San Angelo Stadium. The home field advantage was extreme for the Bobcats, fans in Orange packed the stadium over capacity. Then, it started to rain, a torrential downpour that benefitted Allen, as the Eagles were the steadier team on the ground. The fans, the absolutely insane atmosphere that hyped the matchup so much, mostly disappeared, understandably so, as the rain was coming down in sheets and buckets with no sign of stopping.

Late in the first half, star quarterback Cal Vincent went down with a shoulder injury, and would not return. With the athletic but young Maverick McIvor leading the charge, and the rain still coming down, the juggernaut Central offense slowed to a crawl.

This was an offense that put up over 70 points twice. They would only score 21 points in their game against Allen, their lowest point total of the year. The Bobcats only scored below 35 one other time: when they beat Permian 28-14.

All of the advantages that Central had gambled on had now become disadvantages, and they lost. Allen wouldn’t lose again until they faced off against an emotional squad from The Woodlands.

It’s not a fact that if it doesn’t rain then Central wins. Allen is a very good team, and that running game and talented defense they had might have done the exact same things to Central if there was no rain and Vincent wasn’t hurt.

That doesn’t change the facts, though: Central was a top team in Texas, arguably a top ten team when all was said and done. It’s not a guarantee that they would’ve advanced to the title game, but they would’ve had a better chance.

It’s really hard to not just list every single senior on Central’s team in this spot. The Bobcats were defined by great senior leadership, it’s the main reason why they were in that spot to begin with. Many had either them or Allen pegged to win the region and then go on to the state championship.

Of that senior class, these three were arguably the most important. Vincent was the general, leading the team up and down the field. West was the X-Factor, his massive frame made it easier for everyone else on the offense. Scott was the brutal one, his overwhelming physicality willed the Bobcats to wins. Out of all the big losses, they’ll be missed the most.

McIvor is an absolute problem, whether he ends up lining up on the field is irrelevant. As long as he is on the field, Central will retain that explosiveness that made them so lethal the entire year.

Gage Smith and Malik Smith have a different problem: they’ll have to replace the aggression and physical play of guys like Gehrig Scott. Smith is good in coverage, and he’ll be one of the key pieces of a good secondary in 2017. Malik Smith is important as well, he’ll be tasked with keeping Central solid up front.

A lot of Central’s success will depend on how well they can replace those members of an excellent senior class. They’ll still retain some of that explosion with guys like McIvor and Henry Teeter returning, but it’s not a stretch or an insult to say that they might be a little bit less dominant on offense in the 2017 season.

It’s hard to say how good they’ll be, because we don’t really know what defines good. They’ll certainly be good, but the question everyone has is “how good?”

Central won’t be as dominant as they were in 2016, that much is certain. However, with a district that’s losing a lot of senior stars, they’ll be the odds on favorites to repeat over a revamped Permian squad and a Midland team that’s seemingly found it’s legs.