A journey from Orange,TX to the Seattle Seahawks

Located on the southeast border of Texas and Louisiana there is a town called Orange,TX, where the population is 18,595 and the legend of Earl Thomas started. From when Thomas was very young people knew he had a talent that doesn’t come around very often.

“I was tossing the ball and exercising Earl from six months on,” his father said. “By the time he was eight years old, he was catching better than kids who were 15 and 16 years old.”

Thomas was a four sport athlete at West Orange-Stark High School. He played basketball, baseball, track, and football. His senior season playing both ways as a cornerback, running back and wide receiver, he finished with 112 career tackles, 11 interceptions and four touchdowns returning punts and kicks. On offense, he tallied just shy of 4,000 all-purpose yards while leading his team to a 24-2 record in his final two seasons.

“Everybody in this community loves Earl Thomas. I’ve yet to see him not stop to sign an autograph. Everybody knows him. The fact that he comes back to where he came from is a big deal. He is Orange, Texas. He put it on the map.” says Coach Anderson, retired West Orange-Stark baseball coach.

Those big numbers earned him a 4-star distinction. With that and his speed he drew attention from several top programs. He was eyeing up LSU at one time, but instead he took a trip to UT and never looked back. 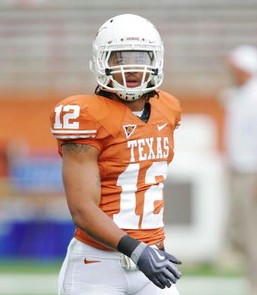 After watching from the sideline as a redshirt at Texas in 2007, Thomas was named first-team Freshman All-American in 2008, tallying 72 tackles with two interceptions and 17 pass breakups, which set the all-time Texas mark for freshmen.

In 2009 Texas went 13-0 to claim the Big 12 champion and Earl mounted an incredible season pulling down eight interceptions and 24 total pass breakups, which would earn him first-team All-America honors.

Thomas was chosen by the Seattle Seahawks with the fourteenth overall pick in the 2010 NFL Draft. He showed off his outstanding athletic ability early on in his rookie season with five interceptions with 76 combined tackles and seven pass deflections.

“Nobody wanted to wear number 29 before Earl Thomas became a Seattle Seahawk. Now everyone wants that number. I assign the numbers, you know, and everyone is battling for 29. Number 29 is a big big deal. He has a tremendous impact on this community here.” Cornel Thompson, West Orange-Stark’s coach for the past 38 years said.

In 2013 the third-most lopsided result in Super Bowl history, the Hawks walked away World Champions with a 43-8 victory. Thomas is a now a five time pro-bowler, four time all-pro, and a super bowl champion.

The Seahawks are set to play the Vikings this Sunday Jan. 10,2016 for the wild card game. Thomas is going into the game with five interceptions, most of any player on the team, and 21 career interceptions which ties Marcus Trufant for sixth on the Seahawks all-time interceptions list.

Earl Thomas’s storied journey from the small Texas town of Orange to Seattle, Washington and the fanitical Seahawk Nation has been a great one. We know for certain that Texas, and especially the town of Orange is looking forward to the rest of the ride.