4-star WR Joshua Moore expands on transferring back to Yoakum, recruiting and more 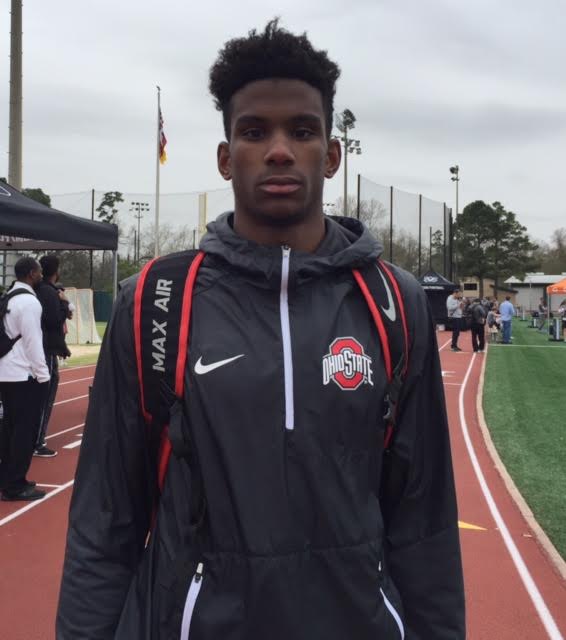 That’s certainly the case for four-star wide receiver Joshua Moore, who made that same decision earlier this week when he announced that he’d be transferring back home to Yoakum from IMG Academy following a brief offseason in Florida.

Why elect to travel back across the country prior to ever officially suiting up for the prep school powerhouse?

For starters, Moore’s family isn’t alongside him in Florida; they’re in Texas, along with some unfinished business at the high school he starred for as a junior, as did his brother and Texas A&M commit, Jordan Moore.

“It would have been a lot easier if my brother was here and came to IMG with me, but he didn’t,” Moore said of his decision to transfer back to Yoakum. “I just want to go back home and finish my senior year with them and hopefully bring back a state championship to the city. That was one of the main things my mom and dad taught me—always finish what you start. I’ve thought about that when I was making my decision. We were so close last year to winning the state championship; why not get the job done this year?”

While Moore is exchanging a pursuit of a potential national championship at IMG Academy for a state championship at Yoakum, Moore raved about his time in The Sunshine State and made note of his daily competition with some of the premier prospects in the country as a worthwhile experience.

“I leaned I can compete with the best of the best,” Moore said of what he can take away from his time at IMG Academy. “I learned that nobody can stop me except for me and if I put my mind to something, there’s no telling what I can do.”

As for now, Moore is putting his mind towards emerging as a leader and going out on top at Yoakum.

In 2016, Moore’s Bulldogs ripped off nine straight victories en route to an appearance in the 3A-D1 state championship game against Mineola, but that’s where the streak ended. Yoakum failed to score after halftime and consequently, failed to bring a state championship banner back home.

“My main thing is just to be a great leader and lead my team to a state championship,” Moore said.

“Like I said, I’ve got some unfinished business back at Yoakum.”

Between now and December, though, Moore has much to accomplish. Most notably, Moore’s lengthy and highly glamorized recruitment will finally come to a close within the coming weeks. But despite being pursued by 50-plus programs, being contacted by seemingly countless coaches and reporters and everything else that goes into the recruiting process—especially for elite prospects—Moore emphasized how much of a blessing the past two years has been.

“It’s been a blessing,” Moore said. “When you have that many offers it’s easy to buy into your own hype and get big-headed. I just thank God that I stayed humble through it all. It definitely puts a target on your back so you definitely have to be prepared for everything that’s going to come at you.”

Some may operate under the assumption that Moore is College Station-bound to join his committed brother, Jordan.

In February, Moore said there was an 85 percent chance that he and Jordan go their separate ways in college, but more recently, Jordan hinted that they’ll continue to play alongside each other at the next level.

On the contrary, Moore said that decision isn’t finalized yet, and may not even come to pass.

“It’s still not really set in stone right now,” Moore said. “He’s committed to A&M; I’m not committed yet. I’m still weighing my options and I’ve got no clue where I’m going to end up. I still would like to play with my brother, but if that doesn’t happen, if I feel another institution can put me in the best position to be successful, then I’m going to commit to that school, whether it’s A&M or not.”

Among the things Moore is looking for in his ultimate destination is the chance to play both sides of the ball and run track. Each of Moore’s five finalists have provided those exact opportunities and along with stressing the importance of being able to run track in college, the All-American wide receiver is confident he can emerge as a two-way difference maker at the next level.

“I want to show them that I can come in and make an impact right away on either side of the ball,” Moore said. “I’ll make plays wherever you put me so it’s really up to the coach.”

“[I’m] very ferocious, especially on defense,” Moore said of how he’d describe his game to the fan base he’ll ultimately suit up in front of. “I don’t really care who’s out there in front of me. I like to talk a lot of mess,” Moore added with a laugh. “So just a very ferocious player, a very confident player. I’m a vertical threat at wide receiver, a very physical wide receiver and a physical corner. I can beat you deep with my speed, run great routes and have great hands.”

Considering his wide-ranging skill-set, Moore emphasized that he’s set on playing football at the highest level on Sundays as soon as possible.

While cashing checks to do what he does best is certainly well within the realm of possibility for Moore, he’s still a handful of years away from walking across the stage and boasting an NFL hat.

Before all of that can be possible, though, Moore still has unfinished business back in his hometown and a legacy to leave behind in Yoakum, Texas.

“Not only as a great football player that left everything out on the field every single game every single practice, every single snap, but also as a great young man that had dreams of going to the next level and had the opportunity to accomplish that,” Moore said of how he wants to be remembered when his high school career is complete. “Hopefully I’ll leave a legacy behind where young kids from Yoakum have confidence in their selves that they can get to the next level because they’ve seen me and my brother do it.”

“I just thank God that I stayed humble through it all.” Amen. Wait….what?