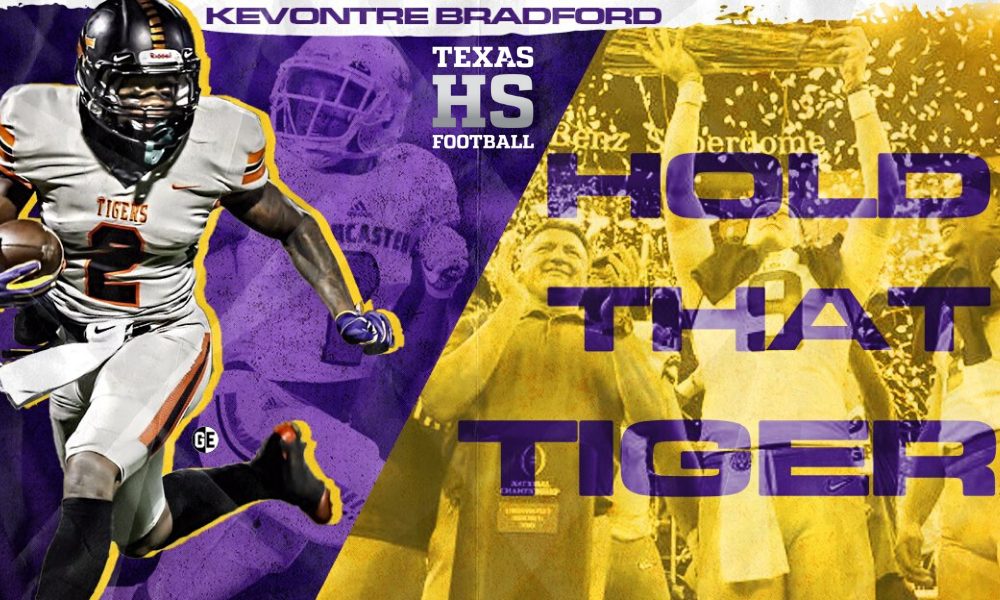 Kevontre Bradford, formerly of the Oklahoma Sooners, has re-enrolled at LSU and has rejoined the Tigers football squad. LSU is hoping that the former 4-star prospect from Texas will be declared eligible for the 2021 season.

After spot duty in 2020, Bradford entered the Transfer Portal after just one season with the Tigers and transferred to Oklahoma this offseason. The former Lancaster High School (TX)standout left the Tigers with 58 yards rushing and three catches for 13 yards and a touchdown in three games in 2020.

Bradford’s highlight with the Tigers was the aforementioned TD catch for a score in the win at Florida.

After just two months he was back in the Transfer Portal again at the end of August. The Sooners were hoping Bradford would help out in what is also now a thin running back room, which is occupied by just two scholarship running backs.

Kevin Faulk’s running back room is equally short-handed. John Emery Jr. is out due to academic issues. Freshman Armoni Goodwin is nursing an injury. That leaves just Tyrion Davis-Price and former walk-on Josh Williams and freshman Corey Kiner. Kiner did not play in the UCLA game.

Davis-Price and Emery missed time in fall practice while Goodwin and Kiner made plays and impressed the coaches.

Bradford, a 5-11, 193-pound back, ranked #130 overall on the 247Sports Composite. He was rated a 4-star prospect. Bradford had 28 scholarship offers and chose the Tigers over such schools as Texas and Florida State.

Bradford rushed for 3030 yards and 42 touchdowns, and had three receiving touchdowns, in his prep career at Lancaster.

He has been described as a strong, power runner. Bradford can be an impact player capable of making big plays. He comes back to the Tigers at the most opportune time. LSU needs a playmaker at the running back position. Bradford could fill the void that was missing in Week 1.

If eligible, do you think Kevontre Bradford can make a difference in LSU’s rushing attack this season? Leave a comment below.