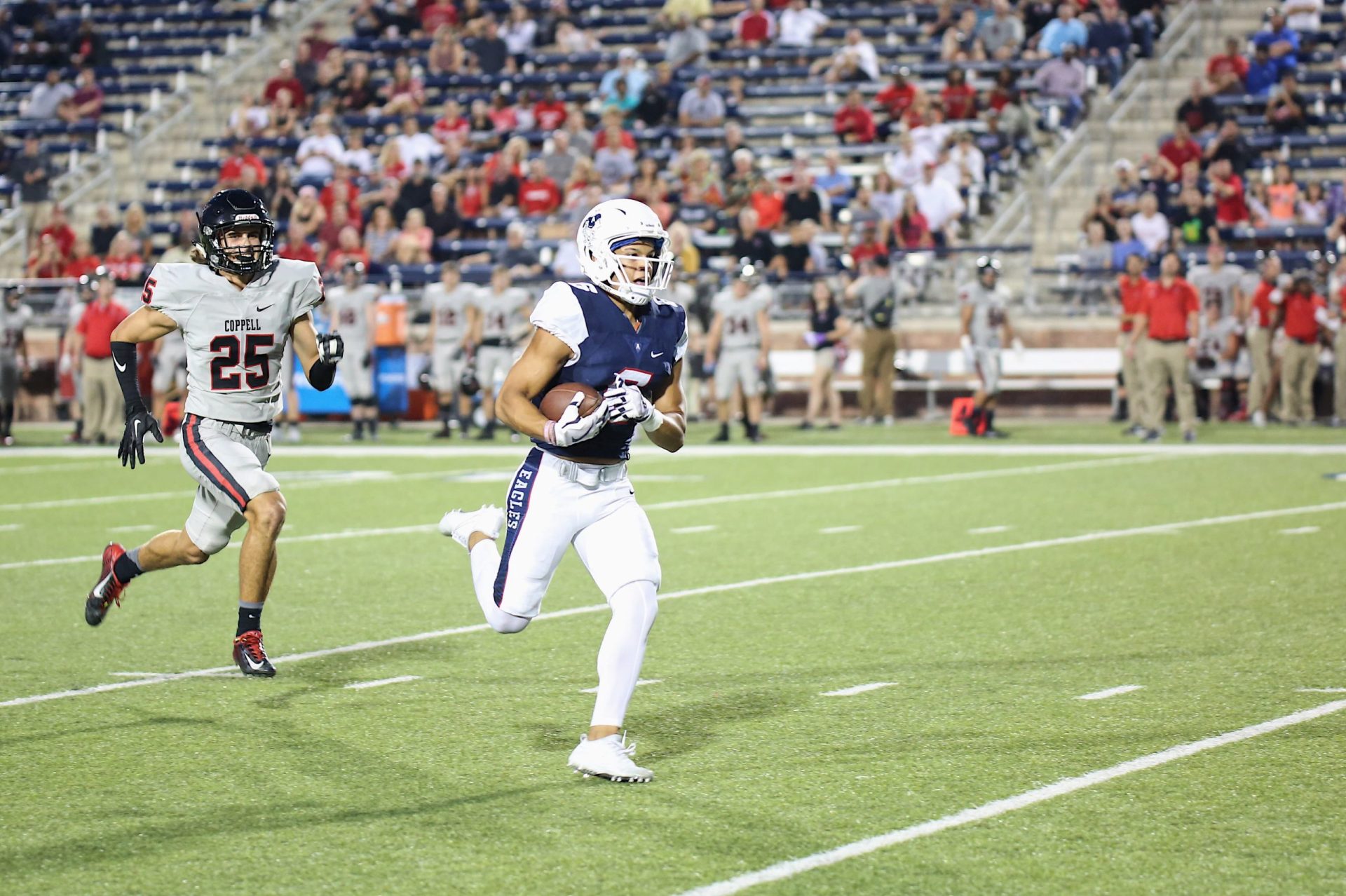 ALLEN — Things were business as usual as the Allen Eagles won their 47th consecutive regular season game 35-23 over the Coppell Cowboys on Friday nightat Eagle Stadium  The only thing different about this game was that the result was in doubt until two minutes were left in the fourth quarter.

On a crucial fourth down at the Allen 25-yard line with 6:57 to go, the Allen forced a field goal that made it 28-23 and kept the Cowboys at a two-score deficit. It was then the Eagles offense got the message that it was time to seal the deal and claim a win.

“It felt good to take as much time off the clock as possible,” Allen junior quarterback Grant Tisdale said.

In the first two games of the year, the Eagles (3-0) passing game had struggled to get off the ground. That wasn’t the case tonight as junior quarterback Grant Tisdale was throwing the ball all over the field. In the first half, he was able to stretch the field with touchdown passes of 67 and 49 yards.

“Coach (Terry) Gambill preached that we have to get the passing game going, Brock (Sturges) had a big two first games and we don’t want to always rely on him so the passing game has to get going,” Tisdale continued. “I’ve been with Carson (Schekler) and Theo (Wease) since freshman year so we have a great connection out on the field.

On the second play of the second quarter, the Cowboys took a 10-7 lead on a 28-yard pass from Brady McBride to Gabe Lemons. The Cowboys (2-1) then surrendered one of the big plays giving the lead back to the Eagles 14-10.

Coppell kept making enough plays to stay within striking distance. Jonathan McGill returned a blocked field goal to the Eagles 20-yard line with 4:06 left in the first half. The Cowboys were only able to get three points out of the great field position and a pass interference call in the end zone on the first play of the drive making it a 14-13 game with three minutes left in the first half.

“We had some adversity tonight and out guys fought and battled the way I was hoping they would,” Eagles coach Terry Gambill said after the hard fought win. “Our guys continue to get better each week which is great. I don’t want to be playing our best football now, I want to play it at the end of the season.”

Coppell started the second half with a much-needed touchdown drive that concluded in a one-yard quarterback keeper by McBride to make it a 21-20 game. Coppell’s ground attack led by Ryan Hurt who had 89 yards on the ground. Coppell though wasn’t able to finish a drive to tie it up. Allen went up 28-20 on another long touchdown pass by Tisdale in the 4th quarter. On the ensuing drive, the Cowboys were able garner a field goal, making it 28-23 with 6:57 left in the game.

The decision to kick the field goal for the Cowboys was a gutsy one and head coach Mike DeWitt trusted his defense, they just couldn’t get a stop on third down to get the ball back.