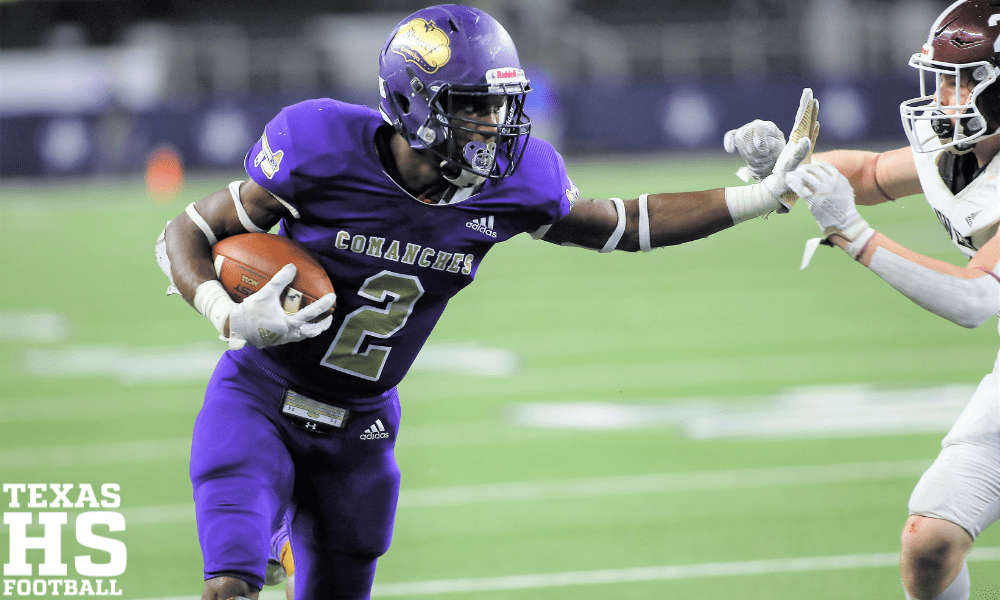 As the clock ticked down in the 2A Division I State Title Game, the only question that remained was whether Dalton Brooks or his brother Doug would win Offensive MVP for Shiner.

In the end, Doug ended up walking away with the honor after a late 79-yard run boosted his stats above his brother.

“[Doug winning Offensive MVP] was great,” Dalton said. “We talked about it through the whole game. He wanted me to run the ball one time, and I told him ,’Take it’ because I wanted him to win the award.”

Doug, a senior, finished with 210 rushing yards and two touchdowns, while Dalton, a junior, added 194 yards and three touchdowns on the ground as Shiner defeated Hawley 47-12 in convincing fashion for its second-straight state title on Wednesday night at AT&T Stadium.

“We trusted our [offensive] line,” Doug said. “We found the hole, and we did what we were told to do.”

Shiner head coach Daniel Boedeker said that in addition to being extremely gifted football players, the Brooks brothers made an impact off the field for the Comanches as well.

“They mean a lot,” Boedeker said. “They’re very special athletes but even better teammates. They’re very unselfish and are always looking out for each other. As a coach, you can’t ask for anything better than that.

Even Hawley head coach Mitch Ables could do nothing but commend the Brooks brothers after the game for their performance.

“They’re special,” Ables said. “I watched a little film, and I had to go get TUMS. They’re dynamic. They’re special and hard to tackle. They’ll be playing on Saturday one day and maybe Sunday before you know it.”

But even though the game didn’t turn out as he would’ve liked, Ables was extremely proud of what his team accomplished this year as they became the first Hawley team in its 54 years of varsity football to ever make a state title game.

“I’m extremely proud of our guys,” Ables said. “I felt like we didn’t have any quit in us. They’ve been like that all year. These guys fought all the way to the final buzzer.”

Despite Hawley’s efforts, the Brooks brothers stole the show on Wednesday as they accounted for 90% of Shiner’s total yards.

Dalton Brooks made his presence known from the opening whistle as he was responsible for all 59 Shiner yards on its first drive as the Comanches took a 7-0 lead on his three-yard touchdown run.

The rest of the half alternated between the Brooks brothers and the Hawley defense-making plays.

Hawley defensive back Marc Salas stripped Brooks at midfield on Shiner’s second possession, leading to a 49-yard rushing touchdown by Hawley running back Diontay Ramon on the ensuing play.

However, after that touchdown, Shiner kept Ramon in check, limiting him to just 50 rushing yards on the night.

“After the big run, our kids adjusted to the speed of the game,” Boedeker said. “I thought we did a good job of filling our gaps and making things bounce outside and making big tackles on the edges.”

Brooks responded with an 11-yard touchdown, but Hawley was unfazed as quarterback Rodey Hooper marched his team down the field before connecting with Will Scott for a four-yard score to cut Shiner’s lead to 14-12 after the Bearcats missed a two-point conversion.

Hawley’s defense came up with a fourth down stop and a forced fumble in the Shiner red zone as the second quarter progressed, but both times, Hawley failed to add any points offensively.

And after being held in check for most of the half, Doug Brooks broke free for a 28-yard score with 40 seconds left in the second quarter to give the Comanches a 21-12 halftime lead.

In the second half, nothing went Hawley’s way. The Bearcats opened the half with turnovers on their first three possessions as Ryan Peterson, Dalton Brooks, and Eli Fric all secured interceptions for Shiner. After the game, Boedeker chalked up these forced turnovers to the halftime adjustments his team made in the secondary.

With the defense rolling, the Brooks brothers took care of matters offensively as Dalton scored on an 11-yard run and Doug barreled into the end zone from one yard out to extend Shiner’s lead to 34-12.

Then after a Hawley turnover on downs, Drew Wenske added some icing to the cake with his first touchdown of the game as he connected with his tight end Tyler Bishop across the middle for a 22-yard score.

Following Doug Brooks’ Offensive-MVP-clinching 79-yard run, senior Makylin Burchell got in on the scoring on a seven-yard scamper to give Shiner its 47-12 lead.

And even though the Bearcats fell short by 35 points, Ables and his players believe a foundation has been laid after a 15-1 season. With many key players including Hooper, Ramon, and Scott all coming back next year, hopes are high in Hawley despite the result on Wednesday night.

““[The future] is bright,” senior receiver Aeneas Segura said. “There are a lot of these playmakers returning next year. The sky is the limit. They could be back here next year and the year after.”

And as the Brooks brothers played possibly their last game together, Doug said it was sweet to go out on top.

Fellow senior AJ Patek, an offensive lineman and linebacker for the Comanches, agreed, saying it felt great to end his high school career as a two-time state champion with 30 consecutive victories.

“It feels amazing,” Patek said. “All the hard work that me and my brothers put in during the season, how far we came. It’s just a great way to go out, and I’m going to miss it so much.”