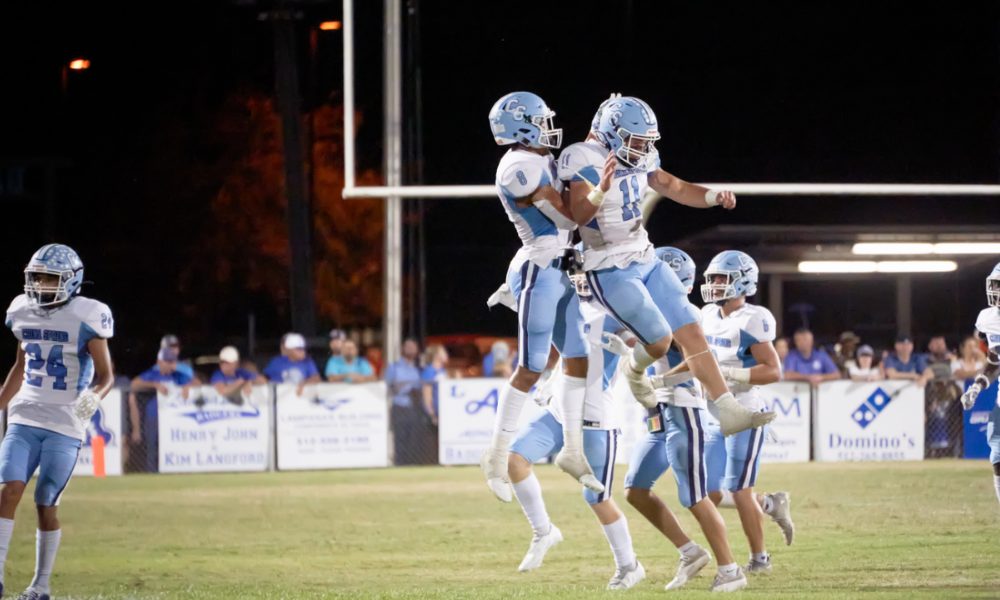 The China Spring Cougars roll into their bye week with a 5-0 record and a #5 ranking in Class 4A Division II.  The Cougars open up district play next Friday, October 8, hosting the Jarrell Cougars.

The Cougars’ fast strike offense is led by senior QB Major Bowden. His ability to run the ball is what you notice first. Oftentimes, he reaches the second level of the defense quickly.

Head Coach Brian Bell says Bowden is just as good off the field. “Major is a very hard worker. Does things the right way and is a leader in the locker room”, Bell says.

Bowden also gets the ball into the hands of his playmakers on the outside, WR Sebastian Trevino and WR Tre Hafford. They are just as exciting to watch carve up defenses.

You’ve heard it before, “Offense sells tickets, Defense wins championships”.  The China Spring offense can put a lot of points on the board, but the defense may be the reason the Cougars will walk away with the district championship this year.

The defense has been great this year. The Cougars are holding their opponents to an average of 13 points per game. Two defensive performances against Lorena and Mexia have stood out.

In last week’s game against Mexia, the worst starting field position for the Cougar offense in their first five drives was the Mexia 30 yard line.  The China Spring defense forced two turnovers and three punts in the first quarter. Mexia did not have a positive yardage play until there was 9:09 remaining the half.

In the 21-13 win over the Lorena Leopards, the Cougar defense was the difference in the game. Junior CB Jacob Mott intercepted a pass that set up a short scoring drive deep inside Leopard territory. The last score for the Cougars came on a 50-yard Scoop & Score fumble recovery by junior Jaylen Trotter.

Coach Bell says that the defense has done an amazing job so far. All 11 guys are doing a great job of executing and wreaking havoc on the offense.

It is a group effort, but senior Dawson Exline is a standout in that talented crowd. According to Coach Bell, Exline has always been a leader, but he has now grown into a vocal leader. Exline holds his teammates accountable to the same standard he holds himself accountable.

A Look Ahead at District

China Spring is favored to walk away with the district crown. The toughest tests for the Cougars will be matchups with the Salado Eagles and Waco Connally Cadets. China Spring fell to both of those teams last year, but they are poised to come out on top this year.

But don’t talk about Salado or Connally to a member of the Cougars. Their focus is simply to go 1-0 next week.