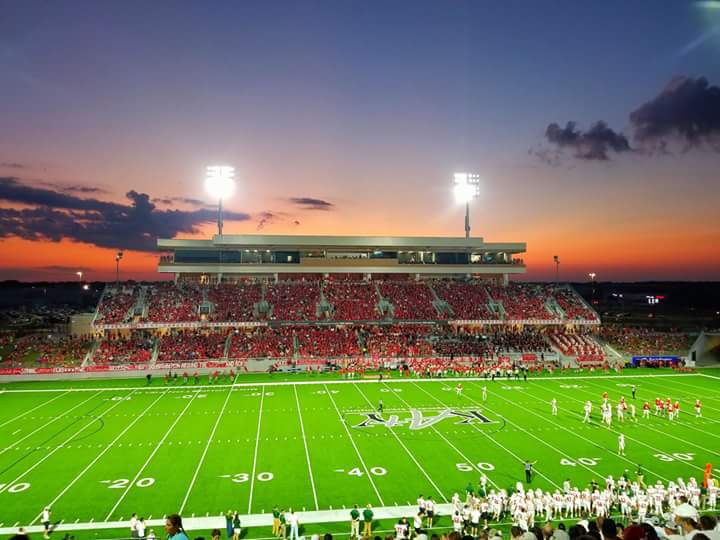 As I sit to write for the first time for TexasHSFootball with the topic of “benefits/drawbacks of the Spread Offense” I ask myself how I keep this article from becoming my first novel as there is so much that can be talked about.

I think before I get started I need to define what exactly the Spread Offense “is” and what “it isn’t” for the sake of this article.

What is A Spread Offense?

My definition of A “typical” spread offense is A 4 wide (10 personnel), 1 back, shot-gun or pistol set formation. Throwing the football is associated with this as well as lots of points being scored and an up-tempo being used to stress the defense out. Huddling is not only frowned upon, it’s discouraged.

What’s not a Spread Offense?

Any offense that has this in its name: Wing T, Flex-Bone, Jumbo, Muscle, Gigantic, Battleship, Tank, Double Wing, Single Wing, triple wing, etc. etc. Also typically involved with these offenses are a huddle, sometimes running a player on and off the field with the play, 3-point stances by the OL, more than 1 RB, a Fullback and/or a TE or two, and the QB taking the snap from under Center. And last but certainly not least, a total disregard for how many defenders line up in the Tackle box.

Now that this has been established, I need to first state that the offense any coach runs needs to be the offense that fits his current personnel best. You can’t run a spread offense just because “everyone else is doing it”, and conversely you probably shouldn’t run the Double Wing if you have spread players. Even with top level college programs, you recruit for what you want to run, but you will always change slightly what you are doing based on the players you have at that time.

Now that the basics have been established, let’s get to the heart of the matter, the benefits/drawbacks of running the spread offense:

-You spread them out, you have less guys to block when you run the football

-If you use the same players, you don’t need to change personnel groups and therefore can go faster

-The QB is usually 4 or 5 yards away from the line of scrimmage pre-snap, which is where the bad guys are that want to take his head off

-Typically an up-tempo, no-huddle is used which can keep the defense from making any substitutions

-If you don’t huddle, you can signal plays in to speed things up as well

-If you use wide splits by the OL, typically the DE’s are no longer a threat to get to the QB

-If your OL can stay low, going out of a 2-point stance allows them to see things better before the snap

-If you have smaller Offensive linemen than normal, this offense can help

-If you have the personnel, who doesn’t like the spread?

-If the weather is bad and your QB doesn’t throw a wet ball well, you could be in trouble

-If you go 3 and out, you haven’t used much time up and your defense is right back out on the field

-Some Coaches say: “three things happen when you throw the ball, two are bad”

-If a defense is running a 3-5, you will have trouble outflanking them without a TE

-If your Center is having a tough time snapping the ball, you could be in trouble if you haven’t practiced taking snaps from under Center

-Harder to sell play-action passes from shot-gun, pistol can be easier but not as good as under Center

-If you do need to take time off the clock, may be hard to do if you haven’t practiced it

-If their skill players are better than yours, it’s going to be a long day

-If they can play man coverage and bring all the rest of their defense on a blitz, you are in trouble!

-If you get into any short yardage/goal line situations, you may have a hard time unless you have bigger personnel available

The one thing I have found in the 20+ years I have coached is that the game is very cyclical. At some point in the near future defenses will start slowing the spread down. When this happens you will start seeing more “I” formations, TE’s, FB’s, QB under Center, play-action passes, huddles, and maybe even an occasional “3 yards and a cloud of dust” approach.