AUSTIN — It’s been 10 years since Nick Foles was taking snaps in the blue and red of Austin Westlake High School, but former and now retired Head Coach Derek Long remembers quite a bit and more than a few stories about his former quarterback.

Stories like when Foles played his entire senior season with a torn rotator cuff in his throwing arm. That year, Foles led the Chaparrals to the state championship game against Southlake Carrol.

In 16 games, Long said he hardly heard a word from Foles about the injury —other than the occasional request to throw shorter passes in practice.

“He never said a word about his shoulder hurting,” Logan said. “I don’t know if you ever tore your rotator cuff in your shoulder, but it hurts to push drawer in. The only thing he would say, is maybe, ‘Coach can we throw a little shorter passes today? My shoulder is a little sore.’ We didn’t realize till after the season that [during]the fourth game he had torn his rotator cuff.”

That senior season, too, was his second as the school’s starter.

Foles finished with 5,658 yards and 56 touchdowns during his prep career and broke plenty of school records. Most of them were held by Drew Brees.

While Long was not the head coach while Brees attended Westlake — he was the defensive coordinator — he said he could see plenty of similarities between the two. What he likes the most, though, is seeing how each reacts to adversity and success.

“They’re both special young men,” Long said. “I guess how Nick preformed helped determine whether I got to keep my job or not (laughs). With Drew, I wasn’t the head coach so it wasn’t such a pressure point for me. The thing about it is, those are two great young men. You love to see young men do things right and be successful.”

Adversity is something Foles has seen plenty of since leaving Austin, Texas. After spending time at Michigan State, he transferred to Arizona. With the Wildcats, Foles had to earn his spot there.

Much like he has had to in the NFL.

Fast forward to the 2013 NFL season and you’ll Foles explode for seven touchdowns in one game and 27 in a single season. He finished the year with an league-leading 119.2 QB rating.

Foles had captured lightning. The problem was he couldn’t hold onto it. His next three seasons were plagued with mistakes, missteps, setbacks, and a 23-20 touchdown-to-interception ratio.

Long said he thinks that stretch probably hurt him, but said it was probably good for him as well.

“[Going to the Rams] wasn’t a good fit,” Long said. “You could drop completely off the radar when that happens. He’s already proved he’s a winning quarterback, he just needs to be in there right program or the right system to be successful. When he went to Kansas City, I think he learned a lot from Alex Smith. The move to Philadelphia, it was a good move for him to go back, even in a backup role. He’s the type of guy, he’s ready to play.”

To some, it may not seem that’s true. Since taking over for the injured Carson Wentz, Foles hasn’t exactly lit up the stat sheet. Especially not with five touchdowns and two interceptions come with 685 yards in four games started.

He hardly played in a Week 17 loss to Dallas but the team is still 3-1 with him. That’s not to give every ounce of credit to Foles for the teams 15-10 win over Atlanta in the divisional round, only to depict his near-perfect execution of the No. 1 rule of a backup quarterback — don’t lose games.

Long says he hasn’t been out much, but he can tell from Facebook there are plenty of Eagles fans walking around Austin lately. Whether they support Dallas, Houston or any other NFL team, all of the Westlake base will have its eye on this weekends NFC Championship game.

Before then, it’ll be unlikely Long will talk to his former quarterback. Due to how busy Foles is preparing for quite possibly the biggest game of his life, that’s understandable.

Long had a message for the kid he watched grow up, though.

“I’d tell him to go out and have some fun, relax and have fun,” Long said. “You know you’re capable of taking charge, you’ve done it all your life. Just go out there and do it.”

Gerald Tracy is an assistant editor with TexasHSFootball, covering prep football in the San Antonio region and collegiate and professional football throughout the state. Follow him on Twitter,@GTracySports, and read more of his content here.

Austin McCallum Can Do This – From 4-6 To State Surprise 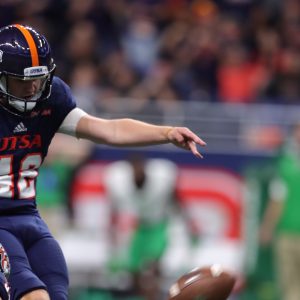