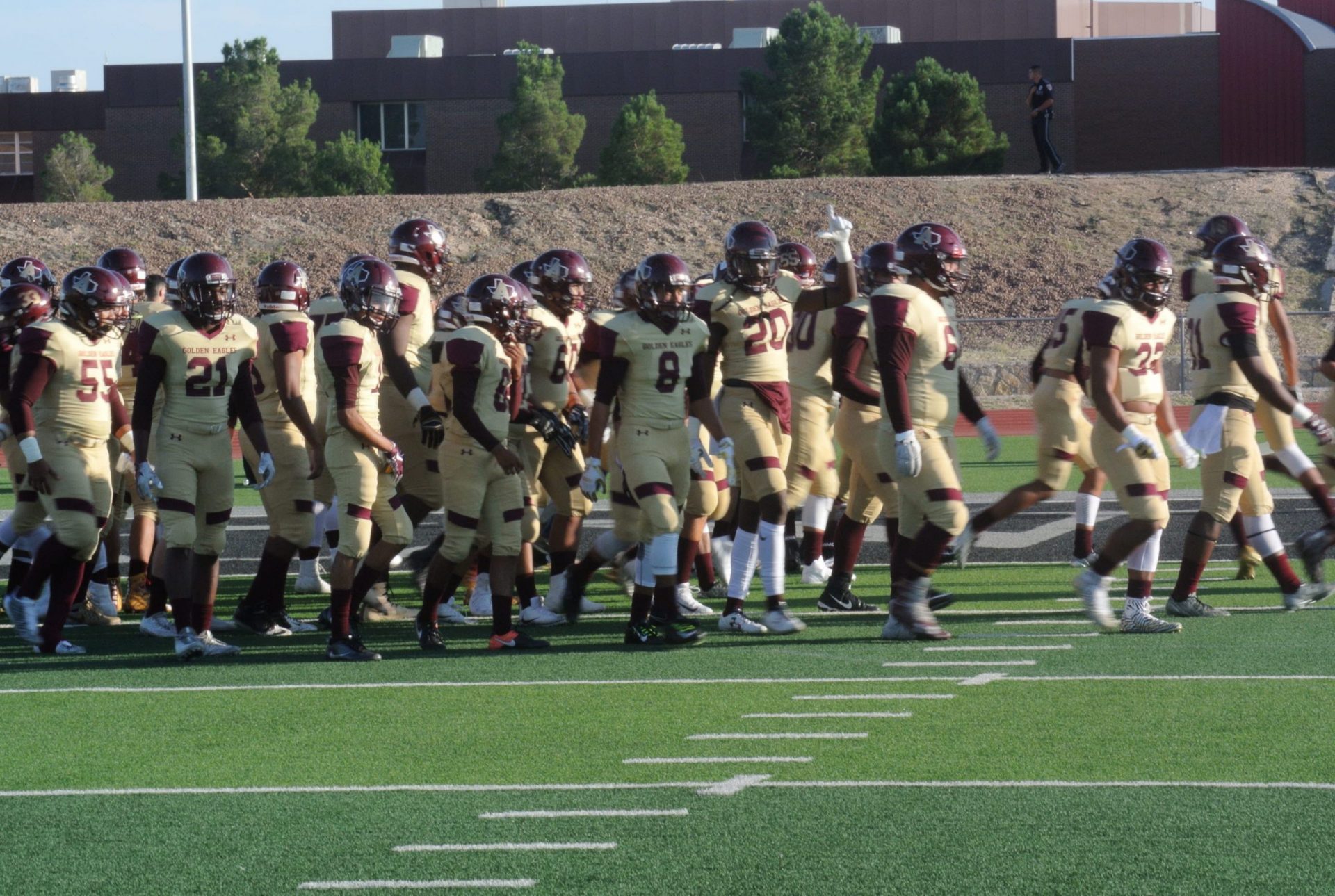 In last year’s season opener against Hanks, El Paso Andress quarterback Dominique Smith was thrust into action after the previous starter went down with an injury and took care of business. This time around, he started Friday night’s season opener and did not disappoint leading the Eagles to a 65-10 victory over the Knights to spoil the debut of new Hanks head coach Aaron Price.

“It was a great team effort tonight,” said junior quarterback Dominique Smith, “Our offensive line played well and our receivers did a great job of getting open.”

The Eagles got off to a fast start on the opening drive of the game, marching 10 plays for 72 yards and capped off by an 11-yard touchdown pass from Smith to Diego Lewis to get the Eagles on the board.

After a Hanks turnover on downs inside the Andress 20, the Eagles wasted little time taking advantage as Smith threw a pass over the middle to receiver Tre Maestas who booked it 83 yards to the end zone to make it 14-3.

Following a Hanks field goal, the Eagles again worked quickly to march down the field in eight plays, capped off by a two-yard run by Smith to make it 21-3. The signal caller would later throw another touchdown pass on the ensuing drive to running back Jalen Joseph and extend the lead to 28-3.

After another Hanks turnover on downs, the Eagles struck again as Smith found Diego Lewis streaking down the left sideline and the junior receiver did the rest, sprinting 78 yards for another score to make it 35-3 and firmly cement the Andress hold on this game. Lewis finished Friday’s game with six catches for 108 yards and two touchdowns.

“Diego always brings a lot to the table,” Smith said, “His speed and his route-running are both really strong.”

The junior Smith would play a few more series in the second half before being taken out late in the third quarter and he was impressive in his first start of the year, completing 16 of 22 passes for 291 yards and five touchdowns while running for 58 yards and a score as well.

“Dominique did make some big plays for us tonight,” Andress head coach Jeff Woodruff said, “We still have a lot to look at. That said, you’re always happy to win your opener.”

Andress gets their season started on the right note, but will now face a much stiffer test against a Pebble Hills team who dominated their season opener Thursday night. Woodruff believes his team will be ready but knows that there’s still work to be done.

“Our guys played well but credit to Hanks for how hard they played under a new coach and a new system,” Woodruff said, “We caught a few breaks and there are some things that we still do need to work on though. We’ll watch film this week and learn from it.”