“There were six minutes left, and you have four downs to get a first,” Trinity Head Coach Chris Jensen said. “That seems like our comfort zone. We’ve been in a lot of close games, and I think it paid off for us. It’s not unfamiliar territory.”

Known for its physical run-heavy offense, Trinity actually got a spark on its final drive from a screen pass to running back Courage Keihn that went for 41 yards. Keihn, Simeon Ellsworth, and Jaylin Buffin then pounded an exhausted Duncanville defense to move inside the 10-yard-line.

On third-and-goal, Keihn bruised his way into the end zone for the go-ahead score.

Duncanville got the ball back with a little more than a minute remaining and quickly drove into Trinity territory. The Panthers had an opportunity to win the game on multiple occasions. The first was on a deep ball to a wide-open streaking Ja’Quinden Jackson, who let the ball go through his hands.

The next was a 50-yard field goal attempt with six seconds remaining that fell just short.

“I thought we left too much time on the clock, but we couldn’t worry about that at the time,” Jensen said. “I saw the clock run out (when the field goal fell short). At that moment, you just let the kids go.”

Duncanville took a 27-14 lead with 5:46 in the third quarterback when Jackson, who spent most of the day at quarterback, hit Bryce Walker for a 23-yard touchdown. But Euless Trinity never showed any signs of backing down. 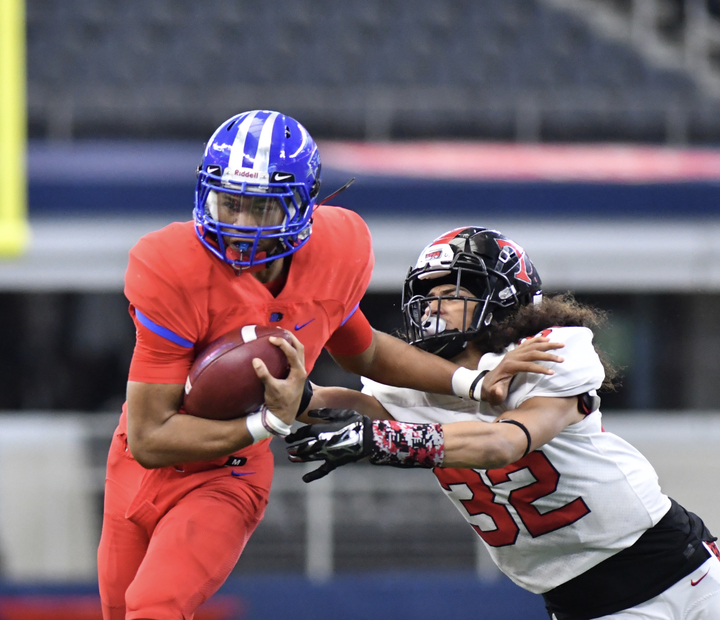 The Trojans responded on their next series with a 2-yard touchdown run from Keihn. The defense then forced a pair of Duncanville punts — the second opened the door for Euless Trinity’s game-winning drive.

“I thought it was to our advantage that they were undefeated and that they didn’t have many close games,” Jensen said. “We thought that if we made them earn everything and made them work that they might get a little frustrated.”

Keihn finished the game with 136 yards rushing and two touchdowns, while quarterback Laki Ellis threw for 138 yards as Trinity showed more balance on offense than in years past. The Trojans will face the winner of Arlington Lamar and Midland Lee in the regional semifinals next weekend.

“I’m just so proud of our kids,” Jensen said. “I was proud of them before the playoffs. I just want to be happy for them one more time.”