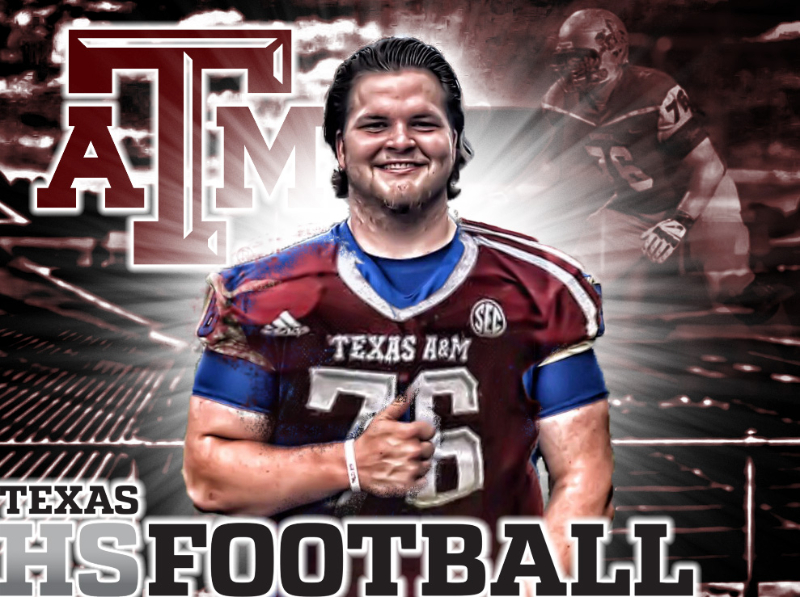 Luke Matthews is the youngest son of the anointed “Football’s First Family” — a rich lineage of football greatness tracing three generations. His father Bruce was a 19-year veteran with the Houston Oilers and Tennessee Titans. Four of Luke’s brothers played for Fort Bend Elkins and three went on to compete at Texas A&M post-graduation. Entering his senior season at Elkins, Luke is prepared to carry on the legacy of his family and has committed to the Aggies, an aspiration of his ever since he was a kid.

We sat down with Luke for an exclusive one-on-one interview discussing the expectations of his family, the appeal of Aggie football and his anticipation for his senior year.

Was the decision to join the Aggies inspired by your brothers’ playing careers?

That definitely helped influence it. I’ve known it for over a decade now. Knowing the area up there, the really nice facilities. Coaching staff. I love it all up there. For me, it was a really easy decision.

Especially since you went to their games and felt the vibes of the stadium and saw everything there was to see at College Station. So when was the last time you went to A&M? Are you still in frequent contact with the coaches? What’s going on with all that?

I’ve been talking to the coaches and going up there for events like Junior Day, special visits, the coaches game. I actually only made it to one game last year against Ole Miss. A lot of the games I planned to go to I couldn’t, because we had a Saturday game that weekend. This year, I’m definitely going to more.

Was there anything else that spoke to you about being an Aggie?

A lot of o-lineman outside of my family that went had great success in the NFL. They must be doing something right over there.

You declared your major as Business Administration. Obviously, your dream is to make it to the top. What were you planning if that doesn’t pan out?

I’m interested in real estate. Actually, my brother does that now in College Station. Even before he started out, I really liked that. Thought it would be pretty cool.

Did you all play your spring game yet?

We finished two weeks ago. I was out from a shoulder injury. Last spring, I tore my labrum and got surgery this January. Everything’s back to normal now and I’m good to go.

Danny Arnold (of Plex training facility) said they were doing some PT work with you and some strengthening stuff.

For the past three or four months, I’ve been going to Plex for therapy on my shoulder. I’ve got good range of motion and strength back. It’s my call whenever I come back.

What was the pain you were going through for the labral tear? Did it happen during a game?

I played with a brace under my shoulder pads. It was never really bad. After a game, it was a little sore here and there. But, nothing painful. It never stopped me from playing. Originally I was told I would heal in 6-7 months. I’ve always been able to recover really quickly and I’m back. It was pretty easy for me. Not too much to it.

What’re your expectations for this upcoming season? It’s your last year. What’re you hoping to do?

Picking it up aggression wise, finishing people. Just making plays on the field. Going all out for my senior year. I’m really excited with the offense we have and I think we will go pretty far into the playoffs with them.

What do you want to improve over the offseason?

Strength and conditioning wise, I definitely want to get a stronger upper body.

You have an interesting life in that you have a long lineage of players in your family. As the youngest, what was it like growing up and seeing everyone else have successful football careers in their own right? Is there any pressure, expectations? What’s going through your mind when you’re in that position?

I’ve never felt pressure from my family. They’ve supported me through all my decisions. Of course, I would love to make it to the level my family members have. It would be incredible, such an honor. I really hope to someday make it up there. It’s all a matter of going out there and doing what you do best.

Who would you say you learned from the most in your family?

Definitely my Dad. I’ve always liked to look at Jake and Mike, especially when they were at A&M. With Kevin, I was a little young for and didn’t really pay attention to. My dad has definitely helped me through all of my football process.

Have you been to your dad’s offensive linemen camp he runs with Danny at Plex?

I went to all of them. You learn that it’s the little things that make an o-lineman good. Having good hip flexibility, good footwork, always keeping the pace and just lining yourself up right on a pass, finishing people at the ball. Basically, it’s drill after drill with those things incorporated into it. I liked it a lot. It’s really helped me out as a player.

Is this something that you wanted to do since you were a little kid? Or was it something your parents wanted you to do and you just fell in line? I’m assuming it’s the prior because you sound pretty passionate about the things you’re saying.

Ever since I was a little kid watching my brothers play, one of my biggest goals in life was playing at A&M and have a great time up there. Having the experiences they had is always something that has kept me going in the back of my mind.

Essentially you’ve accomplished that. So what’s next?

Next is being better and becoming the best player that I can be.