There’s an old saying in the football world that says, “the eye in the sky never lies”.  This usually comes from a coach when reviewing the previous days game film, because what the player said on game day somehow didn’t match what was really happening on film.

Game Film and football have been hand-in-hand for decades. However, in the early days game film was a whole lot harder to come by.  With the explosion in technology over the last 20 years good film has become more assessable to coaches.  The biggest issue these days is that coaches and football programs are often restrained due to school budget restrictions.  Some school budgets are so tight we have even heard of coaches coming out of their own pocket because they know how vital having good game and practice film is to the success of their program. 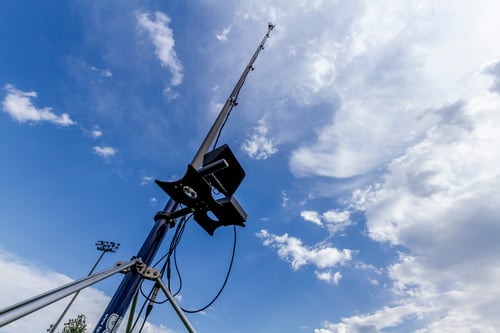 Today, camera systems that can capture the angles coaches need start around $2,000 and can easily exceed $8,000.  We’ve all seen these at one time or another at the game on Friday night.  They’re the giant tripods in one of the end zones. These systems are great if you or your program can afford to buy it, but what if you can’t.

This year we have partnered with a hot startup out of El Paso (Yep….El Paso, not Austin or Dallas 🙂 ) that is looking to make their mark on the football world. GPC or Game Plan Cam has developed a high quality and affordable camera system for coaches to film games and practice. The GPC camera system retails for only $1,072, which is a fraction of the price of typical end zone camera systems.  You may have even seen some of our photographers using them on Friday nights at games across Texas. What impressed us the most, besides the quality of the video, was the unique parabolic hood that serves as an antennae to maintain wifi access wherever you are.

This week you have an opportunity to win your very own Game Plan Camera system.  Entering for a chance to win is simple.

To enter the giveaway:

Important: To leave a comment you must be on a desktop, laptop or tablet.  Current software does not support commenting on smartphones.

Each comment you leave is considered an entry into the drawing to win a GPC system valued at $1,075.  So feel free to comment on as many photos as you like and let our photographers know how much you like their work!  They’ll appreciate it.

The more photos you comment on the more times you enter the drawing!

*Everything you need except the Smart Device! (phone or I-PAD).

A Mustang Story: How Perseverance Helped Kingwood High Survive Muddy Waters of Hurricane Harvey, Come Clean On Other Side

Katy Rolls Into Regional Finals With Shutout Of Humble Atascocita