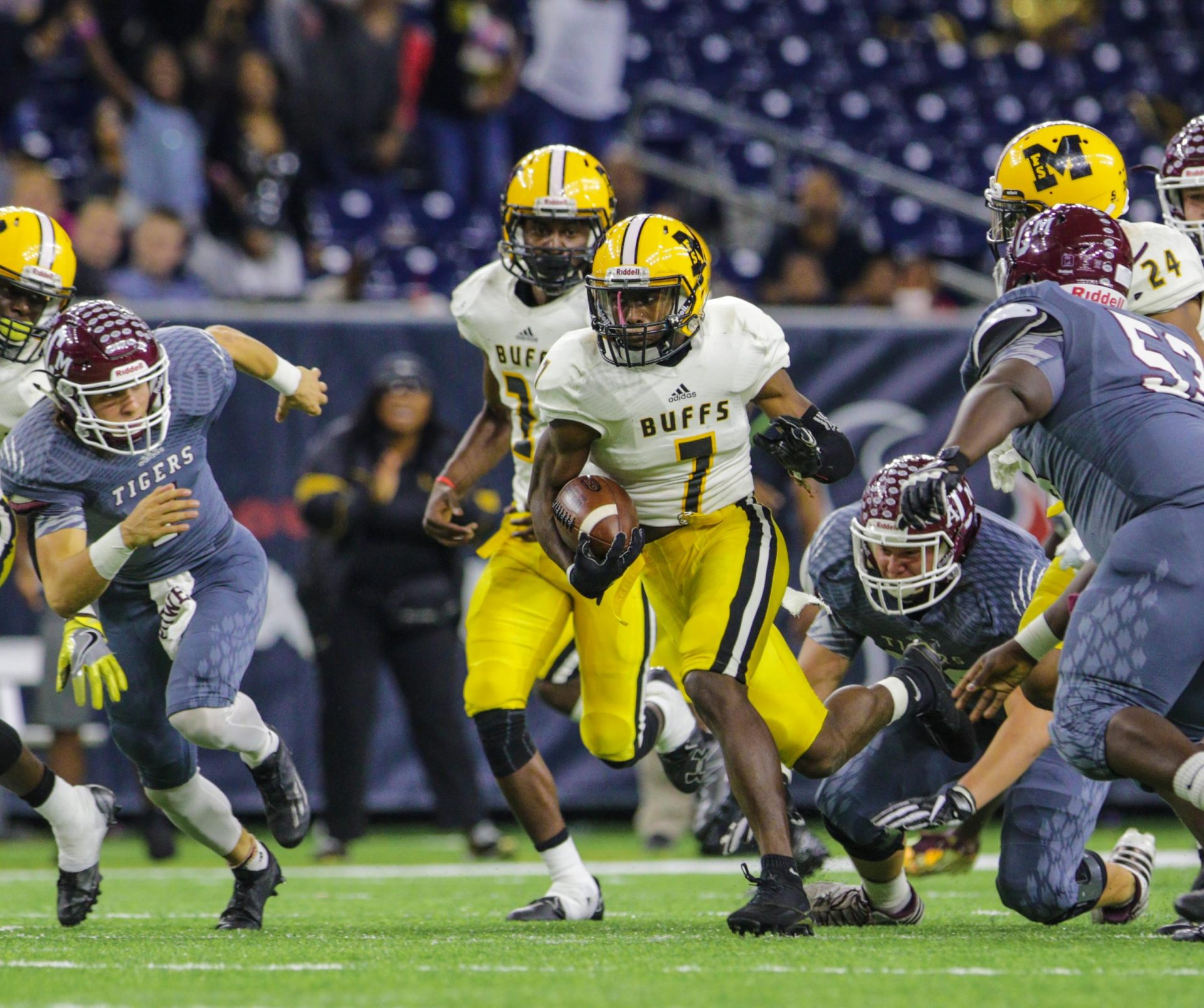 Football is a lot like the movie Inception sometimes. The harder you try to understand what just happened, the further you are away from the truth. Now, that is not always the case, but it is a true statement for every soul that watched the Fort Bend Marshall Buffaloes win a 28-21 thriller against the A&M Consolidated Tigers at NRG Friday night. Although down on the scoreboard and in nearly every statistic recorded in the first half, the Buffaloes still somehow managed to put together touchdown drive after touchdown drive to beat the Tigers.

The first play of the game was a false start by the Tigers, setting the tone for the game in which there would be combined nine penalties thrown in the first half— that’s as many flags thrown as first downs converted by the Tigers in the first half. Completing a 60 yard drive in less than fifty seconds, senior running back Robert Franklin showed brute strength as he took the ball 15 yards to the end zone and running over three defenders on the way there, making it 7-0 Tigers. The Buffs’ nearly landed in the redone on several drives that quarter, but mental mistakes and poor blocking costed them scoring opportunities.

Later on in the second quarter of play, things got interesting as Williams threw a pick to senior Buffaloes defensive back Jakobe Sheffield. However, Marshall once again left points on the table, this time throwing away their shot for a touchdown in the form of an interception as Tigers junior safety Chase Martinez made the pick in the end zone for a touchback with 10:16 left in the first half. With the ball on the 20 and plenty of field to go, the Tigers dazzled on this drive. Williams managed to get off a huge a third down pass to his wideout Brian Darby for 23 yards. Next play, Williams evaded pressure and left the pocket, rushing upfield and breaking two defenders ankles as he is run out of bounds—a late hit pushed the spot up to the 13 yard line. Williams on the following play took it on a designed QB sweep left, pressing the ‘B’ button on a hopeless defender en route to the end zone with 7:14 left in the second quarter.

The Buffaloes would manage to put together a touchdown scoring drive on the goal line around the three minute mark, making it 14-7 and a one score game, but the score did not reflect the play of the game. Going into the half, you could visibly see the dejected faces of the Marshall players. Many fans, and even some fellow writers, left the game before the second half of play began. It was assumed the Tigers would blow them out the next two quarters. But like I said, the more you looked at the face value of the game, the further you were away from the truth come the third quarter.

What was said by the coaches to the Marshall players in the locker room during halftime is between themselves and no one else. Yet, one has to wonder what words were spoken to inspire those young men to come out in third quarter and put on a show. After receiving the opening kickoff for the second half, the Buffs’ had great field position at the 50 yard line and used it well. On the third play, junior quarterback Jabari James sat in the pocket and delivered a beautiful, spiraling 30 yard pass to his favorite target of the night, Henry Thomas, whom made the effort to get both feet in before falling out of bounds and setting them up on the 6 yard line. Next play, sophomore receiver Korey King dove across the goal line on the 6 yard catch and go for the tying score.

Assuming the Tigers would answer back, everything appeared to be alright—for now at least. After going three-and-out following Marshall’s kickoff, the Tigers opted to punt the ball; what a mistake this turned out to be.

Korey King returned the punt and did so in such as fashion that even Devin Hester would be proud of. Zigging and zagging 81 yards to the house, King silenced the entire Consolidated side of the stadium as Marshall would take their first lead of the game and never look back. With 53 seconds left in the third quarter, Jabari James made what was perhaps the momentum changing play of the game. Fourth down and fifteen yards to go, James took the snap from the shotgun, stood, stepped up and ever so gently placed the ball in King’s hands for the touchdown. 28-14 Buffaloes and confusion ensues everywhere.

Things became a little dicey as the Tigers never backed down. With just over two minutes left in the fourth, senior Tigers receiver Burl Carraway would catch a 10-yard out route in the red zone to bring the deficit to just one score. Not being able to recover the onside kick, it appeared to all be over (… but wait, there’s more.) Marshall from what it looked like attempted to run the clock out but couldn’t get any push from the offensive line or any yards gained from their rushers. Consolidated had enough timeouts left to make the Tigers punt with a minute to go.

The Tigers returned the punt to the 45 yard line with 27 seconds left. After three plays, the Tigers converted on a impossible 4th and 10 play. Next play, Williams throws to Darby again and it is incomplete with nine seconds left—but fate had other plans. Darby got absolutely rocked by two Marshall defenders. Flags for pass interference and targeting were thrown and added on, placing the ball at the 19 yard line and just inside the red zone. Two plays later and four seconds left in the contest, Williams threw a perfect pass but it’s deflected at the last second by senior safety Jairus Taylor to seal the game and push the Buffs’ to the next round.