WAXAHACHIE, Texas — Waxahachie ISD junior high football assistant Micah Fletcher alleged targeting and a created “hostile environment” by Head Football Coach Jon Kitna as the reason for his resignation according to a Wednesday morning report by the Waxahachie Daily Light.

“Unfortunately, during my time with WISD, I have encountered multiple personal conflicts between myself and Coach Jon Kitna,” Fletcher stated in his letter of resignation, per Travis Smith of the Daily Light.

Kitna spent 13 years as a quarterback in the National Football League and has operated as the Waxahachie High School’s head coach for three years. Fletcher, a 14-year U.S. Army veteran twice deployed to Iraq (2004) and Afghanistan (during the 2012-13 school year) joined the district in 2016 after 10 years as a teacher and coach at Ferris, Dallas Molina, Life Oak Cliff, and Itasca High Schools.

“These conflicts began following the unfortunate departure of another coach within the district in the spring of 2017,” Fletcher continued. “Since [then], Coach Kitna has had inappropriate and unprofessional encounters with myself on several occasions which ultimately resulted in multiple grievances being filed and reaching level-three with the district.”

According to information obtained about the grievance process from the 2016-17 WISD DGBA (Local) Board Policy Manual, the Level I Administrator — if the complaint is timely — has 10 days to schedule a level 1 hearing and 100 additional to provide a written response. Upon the receipt of the written response, the employee has 10 days to file a Level II Grievance to appeal the level one decision. The process is duplicated for Level II Grievances.

Level III Grievances Administrator heard by the school board in a closed executive session at the next regularly scheduled board meeting. Notice of board’s decision will be provided prior to the next regularly scheduled board meeting. Decisions by the board regarding Level III Grievances are final and cannot be appealed at the local level.

The resignation follows allegations (via email) procured by the Ellis County Press that were sent by an unnamed parent to WHS Principal Al Benskin in February citing UIL violations on athletic period guidelines: 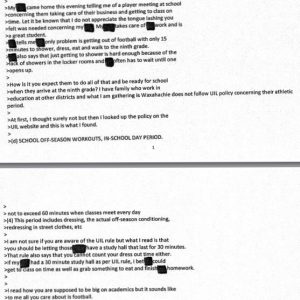 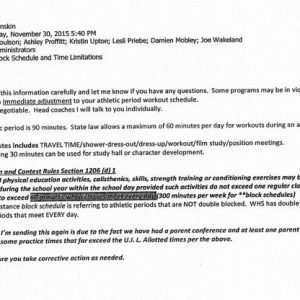 He alleged further bullying by Kitna in a recent statement, corroborating the conversation with an unnamed assistant coach. According to documented evidence, Fletcher also claimed Kitna verbally attacked him in a threatening tone during the meeting and several times accused him of lying.

Fletcher said Kitna, during said meeting, loudly and abruptly stated, “What the hell. Why do you keep lying? You’re lying now. You lied about Ronnie Allen, no one ever heard him say those things. You lied about coach [Evan] Brady.”

“At this point, I felt bullied, threatened and that I was in a hostile work environment due to Mr. Kitna. He spoke to me in a completely unacceptable and unprofessional way,” Fletcher added.

Brady resigned from his position as assistant head and linebackers coach March 23 after allegations of student-athlete mistreatment arose after an injury. Allen, who was on Kitna’s staff in Tacoma, Washington’s Lincoln High School with Brady, Damola Adenji, and Casey Kjos, joined a list of coaches no longer employed by the district.

After deliberating more than three hours, the Waxahachie ISD Board of Trustees voted 5-2 to deny Brady’s Level III Grievance on April 10. Kjos, the team’s former defensive coordinator, resigned less than 24 hours later in support of Brady.

Allen resigned from his position as a special educator and assistant coach Dec. 18.

The Daily Light article further stated Fletcher made claims of faulty and incorrect coaching evaluations by Kitna that weren’t in line with formal T-TESS teacher evaluations regularly used by WISD. Those statements included rhetoric like “he did well in the area of facilities and equipment but did not handle finances properly,” “had an inconsistent recollection of incidents and too often operated outside our base system,” and “had inconsistent attendance and punctuality at practices.”

Fletcher refuted all of the evaluation’s claims and said he hopes the district will reverse its decision, reinstate him, and allow him to continue coaching in his hometown.

Texas HS Football attempted to reach out to Kitna for comment on Wednesday morning. He declined to respond to the comments, stating his focus is on the WISD student-athletes in all sports he and his staff — past and present — have helped mature into men and women, break through socio-economical barriers and reach educational excellence.

“Not going to do it,” he said. “I’m not even [reading the article]. I don’t respond to lies and made up things. I’m focused on these kids, my God and my family.”