This tragic story will give you goosebumps, cause you to shed a few tears, and leave you feeling inspired.

On July 20th, 16-year-old Kaleb Honea, a defensive back for the Rider Raiders, was involved in an automobile accident with a semi-truck. He was airlifted to the hospital where it was determined any hope of recovering brain activity was grave.  The family made the difficult decision to allow for organ donation to help save the lives of others. Though Kaleb, ever the fighter, held on for weeks.  The injuries were too severe and on August 4th, Kaleb passed away.  After he passed away, his mother posted this online:

“How to find the words,” his mother posted Tuesday afternoon. “I am so good with words. But I am at a loss right now.”

… His body has been tired and I know he has been fighting and it was a struggle, and I feel like he was holding on because he has never wanted to let us down.

But this time, it wasn’t about what we wanted. He was just tired.”

“Kaleb was a great kid and a hard worker.  Everyone loved being around him.”

The death was devastating for everyone that knew Kaleb. In the weeks after the accident, the community and team had rallied behind Kaleb and his family.  The extended delay of the football season was probably much needed for the team to cope with the loss of their teammate.  On September 25th, the team took the field for their season opener.

The game was close through the first quarter, but led by Quarterback Jacob Rodriguez, the Raiders pulled away from Midland.  Rodriguez had 5 total touchdowns, running for one and throwing for two.  The Raiders found themselves with a comfortable 35-13 lead and were looking to just get first downs and run the clock down.  However, magic, or destiny, or perhaps the spirit of Kaleb was about to change things.

On a third and three, QB Jacob Rodriguez found himself in a bit of trouble scrambling and lofted a pass to the sideline.  it is one of those passes that typically a quarterback would want back because at that point of the game, you just want to not turn the ball over.  There were two Raider players in the area, but the two Midland defenders were in a better position and it looked like it might be intercepted.  However, as all 4 players converged for the ball, the two Midland defenders collided with Anquan Willis, freeing up Ranse Radtke to make the catch and sprint down the sideline for a 75-yard touchdown.  An improbable play. Kendall Grimes added the extra point.  The score, 42-13. 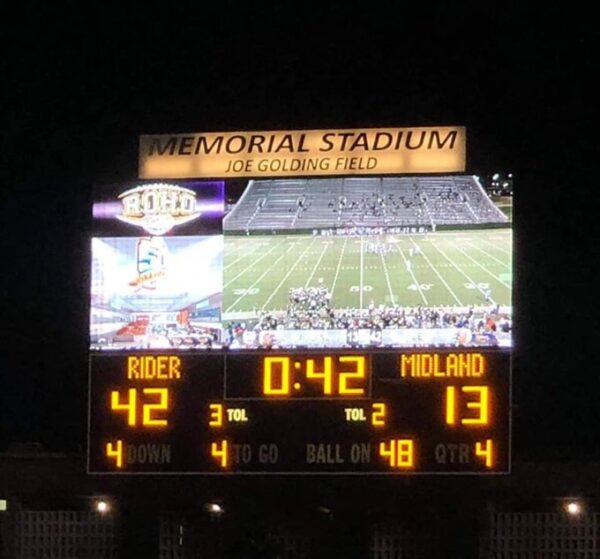 Midland got the back to end the game. Midland running back Ridwanullah Abdurrazaq ran the ball for the final play of the game, a 3-yard run, tackled by Haze Johnson and Rex Wilson.  Guess where the play was made?  The 42-yard line.

The game honoring #42, Kaleb Honea, ended with Rider scoring 42 points, and the ball at the 42-yard line.

The team did not intend to score 42 points.  They were content with taking a 35-13 win and players said that scoring 42 or the significance of it did not cross their mind until the game ended and they looked up at the scoreboard.  The wide-receiver that scored the 75-yard touchdown, Ranse Radtke, in an interview with The Times Record News, said:

“That’s just crazy. That’s something you read about or hear stories about. I mean, that’s so special. It really didn’t render for everyone until after the game. You kind of look up there at the scoreboard, and it’s just standing there. That’s just something special.”

It will be an emotional season for Rider, but with Kaleb looking over them, nothing is impossible this year!

We would like to leave you with some of Kaleb’s own words:

“Love each other, too many people hate complete strangers and this world needs love.  The only thing you owe another person is compassion.” – Kaleb Honea

There is a Kaleb Honea Memorial Scholarshipscholarship fund.  To support the scholarship, CLICK HERE 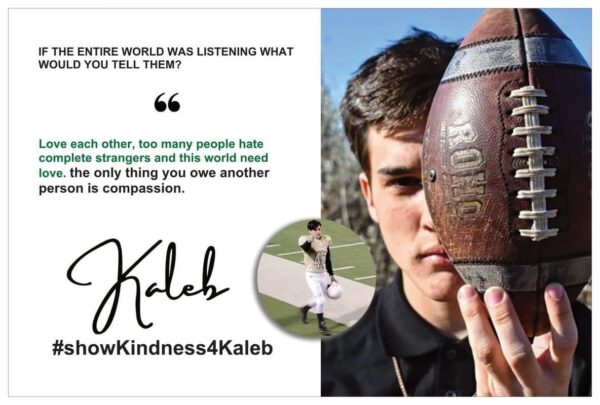