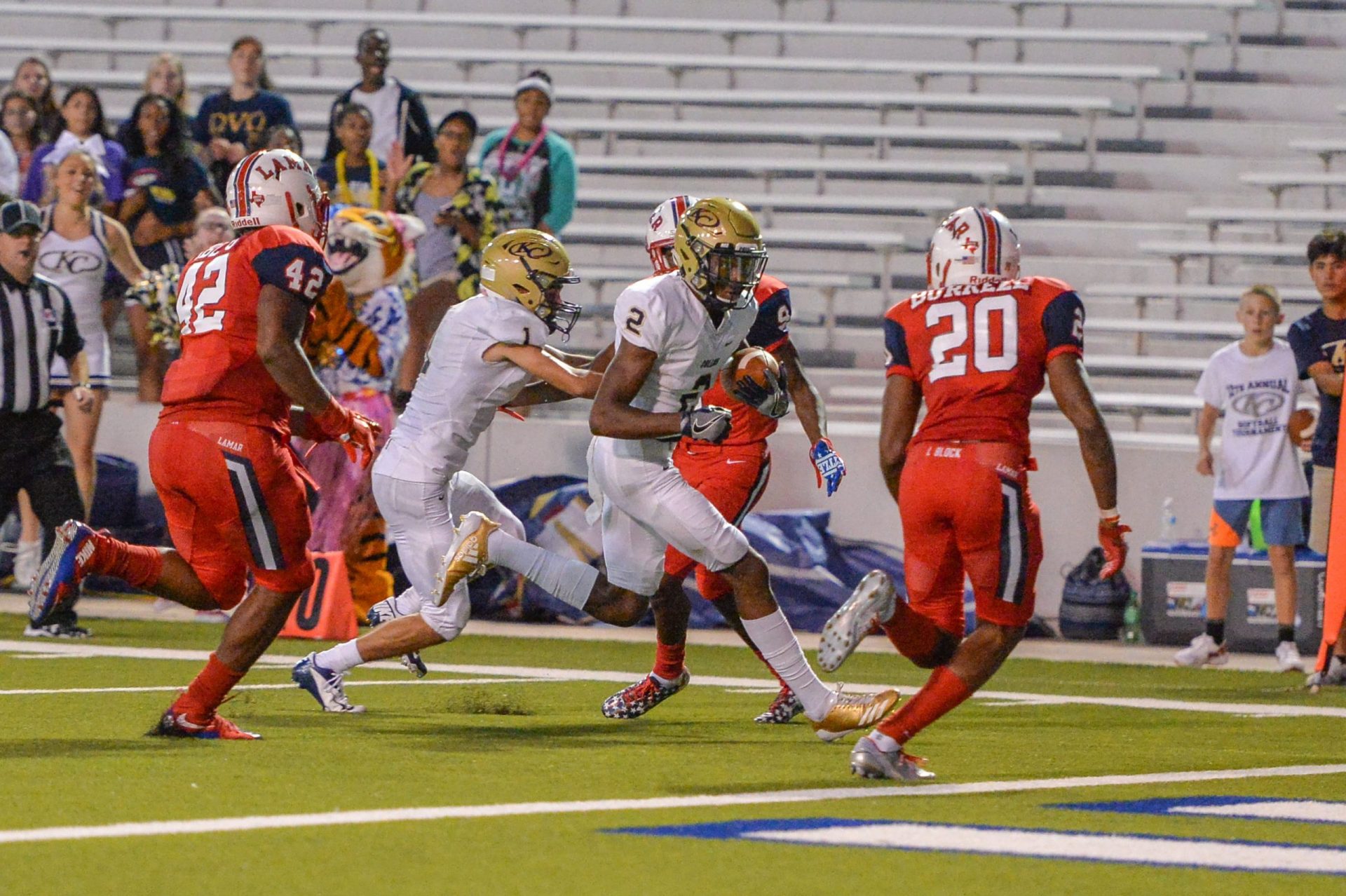 Thursday night’s game between the Houston Lamar Texans and the Klein Collins Tigers was everything but eventful…until the fourth quarter. The Tigers used a strong defensive effort to knock off the Texans 23-14 at Delmar Stadium.

Penalty yards were plentiful as both offenses spent more time going backwards than forwards in the first half. When the dust settled at halftime, the men in stripes had already called nine penalties for 80 yards with six penalties and 50 of those yards belonged to the Lamar Texans. Yet, it’s difficult to blame bad offense when this was the season opener for both teams’ due to the effects of Hurricane Harvey and neither team had broken in the new starters and changes made to the playbook.

“No matter who comes or goes, the standard at Klein Collins is the same,” said Tigers linebacker Donovan Mutin about the impact of losing more than 45 seniors and a defensive coordinator last season, “It was pretty sloppy play for us but we’ll get more polished [as the season goes on]. The approach is the same every game and the standard never changes.”

A defensive game for the ages ensued as punt after punt after proverbial punt gilded the fire orange skies in the Houston sunset. Midway through the first quarter, star Lamar defensive back D’Shawn Jamison intercepted an ill-advised pass from Klein Collin’s quarterback Carter Rhyne taking it 48 yards en-route for the six-point score.

Later in the second, the Tigers returned the favor. With 7:42 left on the clock defensive back Cameron Godfrey turned on the ball-hawk feature as he picked off Texans quarterback Ty Holden and zig-zagged 72 yards to the goal-line before a personal foul was thrown, bringing it back 15 yards. The Tigers would then fail to capitalize after the turnover but ended the half with a 10-7 lead after a successful 27-yard field goal attempt from kicker Landon Powers.

The Texans would claw back against the Tigers though late in the fourth. With 2:30 left in the contest, Lamar running back Ta’Zhawn Henry, a TCU commit, scored on an impromptu 8-yard jump pass from quarterback Ty Holden cutting the deficit to 17-14. After a whimsically confusing 76-yard drive from Klein Collins that looked like it would end the game, Lamar somehow ended up with one last drive. But in iconic fashion, the failed Hail Mary attempt by Lamar ended with a forced fumble sack that resulted in Tigers defensive lineman Isaac Barron scooping and scoring as time ran out to seal the game, 23-14.

“Ugly wins are always better than pretty losses,” said Klein Collins head coach Drew Svoboda. “Our defense came up huge. This was huge for [Klein Collins] to get their first game in. I’m just proud of my team, proud of my coaches for stepping it up.”