Mineola Fighting To Get Over State Championship Hump 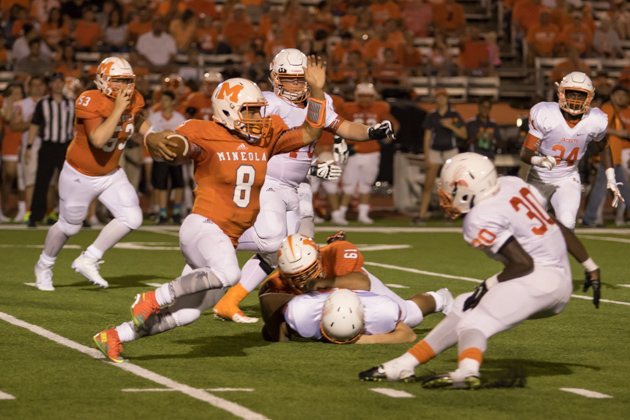 If you want to find the key to Mineola’s success this season, you would have to start with their swarming defense. After giving up 41 points to Van and Kaufman to open the year (both 4A opponents), the Jackets defense has been lights out giving up just under 11 points per game since the 0-2 start. It all starts with their front seven, led by defensive end Devon Gougen and linebacker Kourtland Sinches. This experienced unit has simply shut down nearly everybody they played and shut down Wall’s triple-option attack in the state semifinals.

They face a Yoakum team that also likes to run the ball and will need to contain Henry Enoch and Hunter Owens and the Bulldogs’ cast of tough, physical runners. They also forced five turnovers against Wall and will look to put together one more outstanding performance.

On offense, the mantra has been run, run, and run some more and they have two of the best in the state in quarterback Jeremiah Crawford and running Chantz Perkins. The two ran for a combined 401 yards and seven touchdowns in their win over Wall and the Yellowjackets run-based shotgun look can give teams all kinds of problems. Those two are the key on offense, but can the Yellow Jackets find another option on to go to should one of those two runners find themselves bottled up in the title game? We will find out our answer this week.

Mineola faces Yoakum in the Class 3A Division I State Championship game on Thursday at AT&T Stadium at 8 p.m.