Newton Defies Gravity with Second Half Rise, Ascends to Top of UIL 3A after State Championship Rout of Gunter

And despite a close first three quarters, Newton rallied and secured its place in history after defeating Gunter 40-16 at AT&T Stadium.

“We came in with the mentality of ‘play angry’,” said wide receiver Noah Williams who finished with five catches for 143 yards and two touchdowns and was named offensive MVP of the game. “Coach always says ‘play angry’. We knew if we did that, we would win.”

Defense, not offense, set the tone early as neither team crossed midfield for the first eight minutes and until Daylan Bower’s pass was intercepted by junior wide receiver and cornerback Tamauzia Brown, who returned to the Tiger 29-yard line.

On the next play, Darwin Barlow ran it in to put the Eagles up 7-0. Gunter tied it on their next drive as Peyton Lowe punched it in from three yards out to even the score at seven at the end of the first quarter.

Newton sprinted into — and out of — the second quarter when quarterback Josh Foster found Williams in the back of the end zone to regain the lead and earn a 14-10 advantage the Eagles’ held at halftime.

Though the Eagle defense forced a Gunter to punt during its first drive of the third quarter, a Newton fumble — recovered by the Tigers’ Jose Rocha at the 21-yard line —set up a Bower-to- Braiden Clopton 23-yard touchdown to swing the momentum in Gunter’s favor via a 16-14 lead.

Josh Foster’s pass was intercepted — the second turnover in two consecutive drives — by Clopton and returned to the 33 yard-line, but Gunter was forced to punt. As time expired in the third quarter, Newton’s premier signal-caller found Williams wide open on a 66-yard bomb, helping Newton to reclaim the lead 20-16 despite a blocked point after attempt.

The Eagles’ spark and the key to releasing the proverbial floodgates, though, came in the form of senior wide receiver LaKendrick Adams.

Following a Gunter punt to start the fourth quarter Newton struck first, using Josh Foster dart to LaKendrick Adams and his 74-yard weaving sprint to the end zone to extend the Eagles four advantage to 11. After another stop, by senior linebacker Corbin Foster and Newton’s defense, Brown broke a long play for a touchdown to extend the Eagle lead to two touchdowns.

“You’re kind of at a loss for words after this,” Corbin Foster said after the win. “If I could put it into one word it would be ‘terrific’. I’m going numb to how great this feels.”

Corbin Foster, the Defensive MVP for the game, finished with ten total tackles and a sack. Gunter finished the season 15-1 while Newton capped an undefeated season with the 3A Division II State Champion.

The Cavalier Era: Breaking Down Lake Travis’ Decade of Dominance 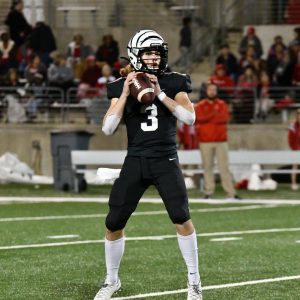