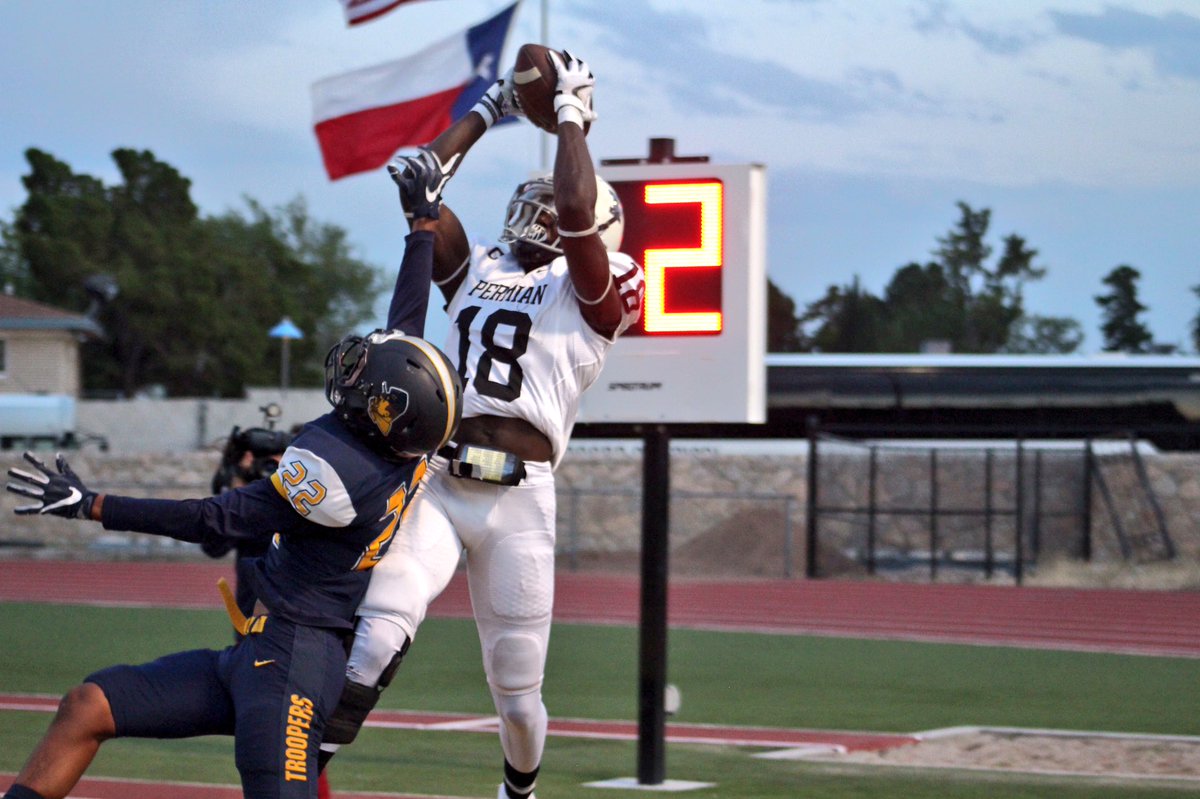 Permian outscored the Troopers 35-7 in the second half to snag the hard-fought victory. Head coach Blake Feldt credits how strong his offense came out to play against the Eastwood team.

“Offense played good the whole game,” he said. “Didn’t turn the ball over once. Thought we had excellent offense, executing how we wanted to.”

Right off the bat, sophomore quarterback Chris Castaneda scored on a nice 75-yard touchdown to wideout Robert Minjarez on the first play of scrimmage. It set the tempo high on the sideline for the Troopers.

The Panthers wanted to shoot that high energy down quickly as they scored within eight following plays on a 67-yard drive that was capped off by a 16-yard Justin Hammond rushing touchdown.

Following Permian’s touchdown, Castaneda put together a long drive resulting in a 3-yard touchdown pass to Pete Cadena, which had the Troopers leading 13-7 at the end of the first quarter.

Panthers quarterback Steve Steen tossed a nice 16-yard touchdown to Brother Miller to quickly respond to the Troopers and go-ahead in the game.

Eastwood would score the last touchdown before half as Castaneda and Cadena connected again, but this time for a 37-yard passing touchdown through the middle.

Things looked positive for head coach Julio Lopez and the Troopers. Castaneda was perfect on his game, completing 10-of-10 passes for 172 yards and three touchdowns.

However, positives quickly turned into negatives out of the half.

Castaneda was building a solid drive for the Troopers when Keatyn Armstrong of the Panthers snagged a 50-yard interception and set Permian up for a touchdown just a few plays later.

After a quick stop on defense, the Panthers got the ball back and scored a 36-yard rush by Steen. They had a momentum-shifting 28-20 lead in the late third quarter.

Big play for our football team,” Feldt said. “We were behind and then that play (the interception) really changed the course of the football game.”

After the interception, Permian was able to force and recover two more fumbles and take another interception at the end of the game. The Troopers totaled four turnovers in the second half.

The Panthers would then capitalize off of the turnovers and turned them into 14 additional points after that.

“We played good the first half,” Castaneda said. “We just had too many turnovers and that’s what killed us.”

In the third quarter after his interception, Castaneda was substituted for Seth Ochoa, who sustained a season-ending injury last year at quarterback. Despite Ochoa not being able to score against the Permian defense, Castaneda stands by the coaches decision to let him play.

“We’re both the best quarterbacks in the city,” he said. “Both of us can make plays and put us in good situations. We’re just as good as they are and we feel that they’re good, but we have to keep executing.”

Cadena led the receiving corps with two touchdowns and was optimistic despite the loss.

“I think we played great,” he said. “There are some things we need to work on. We know we could beat these guys.”

Feldt believed that Eastwood gave his defense a tough look that they hadn’t seen.

“Defensively, they gave us problems,” he said. “Both of their quarterbacks were excellent. We played great defense all year long. Thought they had us on our heels all game. We just made plays at opportune times.”

The Panthers (3-0) will now be able to regroup as they enter their bye week, while Eastwood (1-2) will also look to rectify their little mistakes during their bye week.

“District 1-6A is set up to be crazy and there will be a wild set of games,” Lopez said. “It’s only little things we have to clean up. I’m proud of us.”