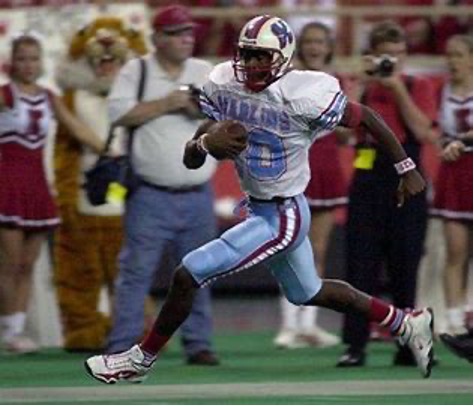 6-5, 200 LBS. A dual-threat quarterback. He could take over and win a game with his arms and his legs. The #1 recruit in the country and the National Player of the Year. He is arguably one of the finest athletes that Houston ever produced. He is Vince Young of Houston Madison.

A three-year starter, he was named the Class 5A Offensive Player of the Year in 2001, his senior year. That season, Young accounted for 3819 yards of total offense and 59 total TDs.

Young led Madison into the playoffs in ’01 and they scored 269 points in five games:

Against Northshore, Young accounted for five touchdowns and 400 yards of total offense in front of 40,000 fans at the old but iconic Astrodome.

In the Semifinals vs Austin Westlake, Young passed for 400 yards and five touchdowns. He also added 92 yards rushing and 1 touchdown in a 48-42 loss.

For his high school career, Young accounted for 12,987 yards of total offense.

Young also proved to be one of the great college quarterbacks as the starter at the University of Texas:

He led the Longhorns into the BCS title game against the USC Trojans. Down 38-33 late in the 4th quarter, Young will forever be remembered for his touchdown run on 4th and 19 and the 2-point conversion to win (41-38) the game and the BCS National Championship for the Longhorns.

Young accounted for 467 total yards and three rushing touchdowns and was the game’s MVP.

On that night, Young chiseled his name into stone annals of Texas football lore. His #10 jersey is retired. For his college career, Young accounted for 9,167 yards of total offense and 81 TDs.

He was a first round pick (#3 overall) of the Tennessee Titans in the 2006 NFL Draft and was the AP Offensive Rookie of the Year that season. He played in 60 games in the NFL.