Preview: Dickinson Aims to Ride “The Gator Way” to 2022 Success 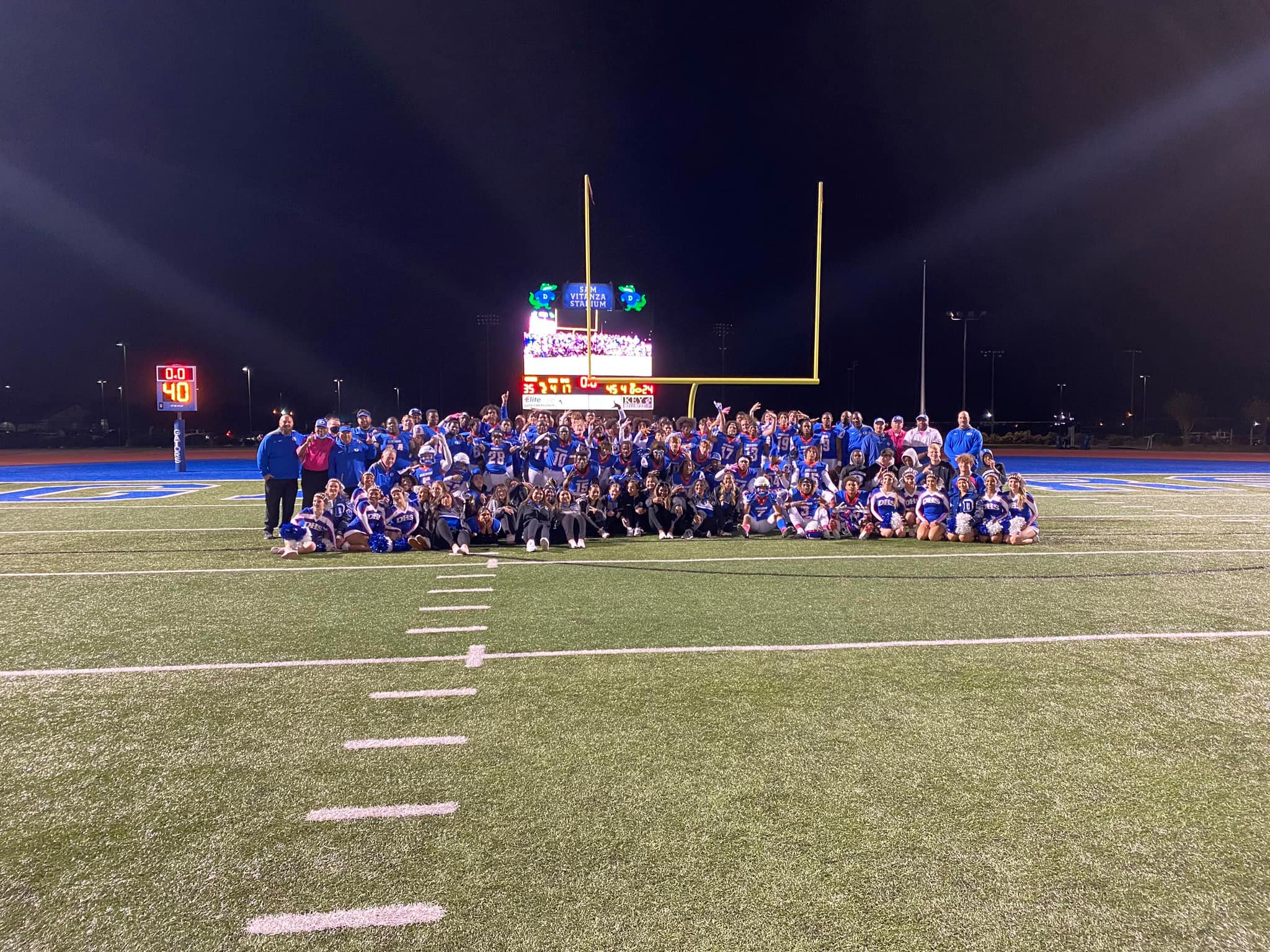 All four of those traits were put to the test on the final day of this past school year.

Dickinson head coach John Snelson told his players that for their final exam, they would have to jog back to the high school from Interstate 45.

Despite the tough task ahead of them, his players trusted him and were in high spirits as they rode the bus over to the proposed starting point of their final exam run.

However, when the buses finally came to a stop and his players filed out into an open field, Snelson had a surprise.

There would be no running.

Everyone is off the buses and ready to go…tbc pic.twitter.com/ttxF3X0duR

Instead, his team would be having a pool party to celebrate the end of the school year. After all, he reasoned, it had been a successful year. Not only had his players worked hard throughout the spring, but they had also gone 9-3 in the fall, earning Dickinson’s second district title in three years. 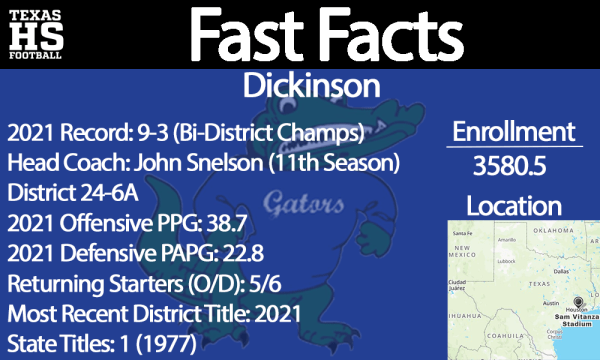 In Snelson’s ten seasons at the helm, Dickinson has been rather successful. The Gators have made the playoffs the past nine years and have won three district titles in that timespan.

This year, Dickinson will have 11 of its starters back from a year ago as it looks to extend its playoff streak to double digits.

Offensively, the Gators do have to replace their starting quarterback as well as Texas A&M signee tight end Donovan Green.

However, Snelson feels encouraged after seeing John Solomon, who was the varsity backup in 2021, and last year’s JV quarterback Brett Bacon compete for the starting job this offseason. Meanwhile, Zyon Little, who was originally another option at quarterback for the Gators after moving in from Clear Brook last year, will be moving to tight end to help fill the hole left by Green’s graduation.

“We’ll end up naming the [starting quarterback] position before the first football game; both of those kids are really good players,” Snelson said. “And Zyon is going to turn a lot of heads at tight end as well.”

Elsewhere, speedy Missouri commit Marquis Johnson —he ran a 10.37 second 100-yard dash this past spring— is back at receiver as is De’Rion Crooms (364 receiving yards). Snelson said Crooms grew up in the Dickinson field house (his father is Dickinson’s defensive coordinator) and will be the “team leader” for the Gators this season.

A hard count on 4th & 2 gets the defense to jump, and the free play results in a 35 yard TD pass from Luke Martin to Marquis Johnson.

In the backfield, Snelson expects several players to play a key role. He mentioned senior KJ Williams and junior Malachi McNair (147 rushing yards) as a couple of the players that will be carrying the ball for the Gators this year.

Defensively, Vernon Glover Jr. is a lockdown corner and a stellar return man for Dickinson. He currently has 16 Division I offers and earned first team all-district honors in 2021.

Glover will have plenty of talent alongside him in the secondary as fellow cornerback Rodney Bimage and junior safeties Diego Sanchez and Nicholas Peace all return as the Gators look to cause problems for opposing quarterbacks.

Dickinson (Tex.) High boasts one of the top secondaries in the state. In addition to touted 2023 CB Vernon Glover Jr., keep an eye on:

Jabari Ellison is another player to watch as he plays a hybrid linebacker-safety position. He broke his ankle last May, but returned mid-season in 2021 and had an impact for the Gators defensively.

“[Our] defense is going to carry us this year,” Snelson said. “We are bringing a bunch of quality players back.”

Looking at the Gators’ schedule, their district opponents remain the same from the previous realignment. Snelson expects Clear Falls and Clear Springs to be two of the biggest challengers for the district title along with the Gators. Clear Springs certainly has the pedigree as the Chargers have won four district titles in the past six years and are responsible for Dickinson’s only district loss in the past three years.

But as the 2022 season approaches, Dickinson’s three yearly goals remain: win a district title, practice on Thanksgiving by making the third round of playoffs, and play for a state title.

However, Dickinson isn’t wasting time dreaming about its lofty goals. Instead, it is continuing to lean into The Gator Way as it gears up for the 2022 season.

“We just practice getting 1% better every day,” Snelson said. “If everybody on our team, coaches too, can get better one percent every day, then when it’s time for big time district championship and playoff football games, we’re going to peaking right at the right time.”