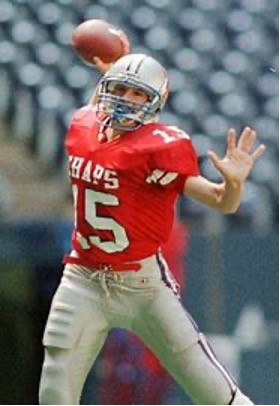 At 6-0, 180, they said he was too small to play quarterback. They said he couldn’t run. But once he got into the huddle, he showed all the naysayers that he was a hard worker and a positive and motivating leader. He is Drew Brees of Austin Westlake.

A 2-year starter for the Chapparals, he amassed a 28-1-1 record under center (or behind the center). Any questions about his toughness were put to rest the summer prior to the 1996 season. Brees suffered a torn ACL in the playoffs the year before. But he rehabbed and trained and was ready to go for two-a-days 7-8 months later. And he didn’t look back.

With a quarterback returning from a serious knee injury and only eight starters returning, Westlake was not highly talked about, and certainly not as a championship contender heading into the ’96 season. But all that disrespect soon changed to trumpeted fanfare.

As a Co-Captain, Brees was the virtuoso conductor of offensive symphony that was tuned perfectly. The Chaps scored 40 points per game and held their hapless opponents to a paltry 12 points per game, including three shutouts, on their way to a 16-0 season. The wins for the 1996 regular season:

Their wins in the playoffs:

Against Abilene Cooper, the game was ties 7-7 at halftime. Then the Chaps outscored Cooper 48-8 in the second half to earn the blowout victory and their first 5A State Championship.

Brees completed 11 of 18 passes for 163 yards and 2 TDs, and he added a rushing touchdown.

Westlake racked up almost 400 yards (393) in total offense. And the defense played lights out, getting three interceptions and recovering four fumbles.

Brees finished the season with 3529 yards and 31 touchdowns, completing 64% of his passes. His favorite target, WR Ryan Read, hauled in 108 catches for 1993 yards.

For his outstanding play, Brees was named the 5A Offensive Player of the Year.

And, for his high school career as the starter, Brees passed for 5464 yards and 50 touchdowns.

The knee injury and his lack of prototypical size for the position scared away schools like Texas and Texas A&M. In fact, he only had two scholarship offers, to Kentucky and Purdue (according to 247sports). Brees signed with the Boilermakers.

Brees was recruited by newly anointed Purdue Head Coach Joe Tiller and his Offensive Coordinator Jim Chaney. They ran a high-octane spread offense and called it “basketball on grass.” Brees became a star in this pass-happy offensive scheme.

At Purdue, Brees beat both Ohio State and Michigan and led Purdue to a Big Ten championship in 2000 and a Rose Bowl win.

His stats at Purdue were stellar:

Brees was a 2nd round draft pick of the San Diego Chargers in the 2001 NFL Draft. He later signed as a free agent with the New Orleans Saints in 2006 and became the savior of a down-trodden franchise that was mired in mediocrity. For 15 seasons, he led the Saints to unprecedented success.

Brees led the NFL in passing in 2009 and led the Saints to their first NFL title, winning Super Bowl XLVI.

His NFL records, awards and accolades are numerous:

He retired earlier this year and is an almost certainty to walk into the Pro Football Hall of Fame in Canton, Ohio on his first ballot.