With the ever increasing number of programs that are putting in some or all facets of the Air Raid (the spread, up-tempo, throw it a ton, wide OL split offense developed by Hal Mumme with the help of Mike Leach) into their playbook it is important to take a look at the role of the

Running Back in all of these Air Raid Concepts. The most important thing to convey to the Running Back is that they will still get the same amount of “touches” in a game, it’s just that in the Air Raid a lot of those touches will come through short, check-down type passes. There are four primary pass concepts used in the Air Raid. Let’s take a look at these with an emphasis on what the Running Back’s responsibility is. 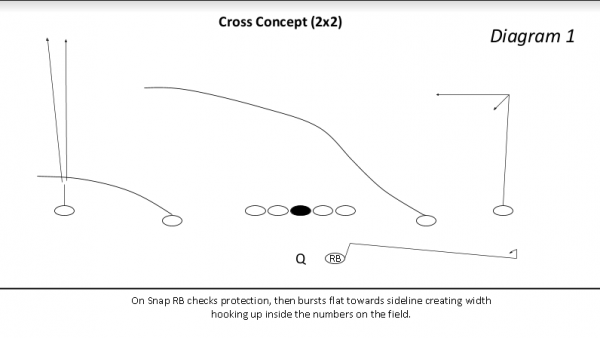 You will see with this 2 x 2 formation the Running Backs job is to check for a blitzing Linebacker then bursting flat towards the sideline shutting it down just inside the numbers on the field and turning and facing the Quarterback. At times the RB can also be motioned out to that spot before the snap. The general rule here is that if no one on defense bumps out with him then the Quarterback will throw to him immediately on the snap. 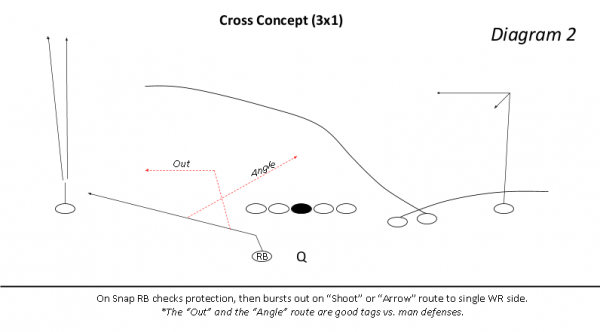 You will now see that in a 3 x 1 formation the role of the Running Back changes and he takes the place of the Slot Wide Receiver in this formation once he has checked protection. Off of this route other routes can be tagged by the Quarterback for the Running Back based off of what the defense is doing. The diagram shows two possible tags that are good vs. man coverage by the defense.

With the Sail concept out of a 2 x 2 formation it is relatively the same route as the Cross concept for the Running Back. All the same rules apply, and the Quarterback can also motion out the Running Back on this play pre-snap as well.

Sail out of the 3 x 1 formation is also the same for the Running Back as the Cross concept. 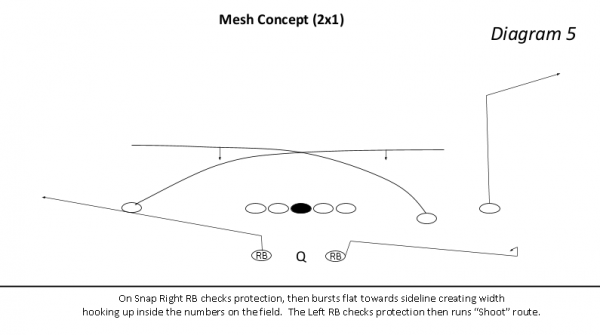 This Air Raid concept is probably the most widely used of all the schemes made famous by Coach Mumme and Coach Leach. It can be run out of a lot of different looks and include a lot of different tags for each skill player to change the route they are running to give the appearance of a completely different play. One difference with this play is that it is usually run out of a 2 x 1 formation with two Running Backs in the back field (or 1 RB and 1 Slot WR). With the diagram example the Running Back on the right will do what he does in the other 2 x 2 concepts. The Running Back on the left will do what he does in the other 3 x 1 concept examples. As mentioned already, the variation of tags that can be used with this play are great.

Mesh concept out of a 2 x 1 formation.

The four vertical (or “6” concept as the original Air Raid folks call it for their ability to score 6 quite regularly on this play) gives the Running Back a different route to run. 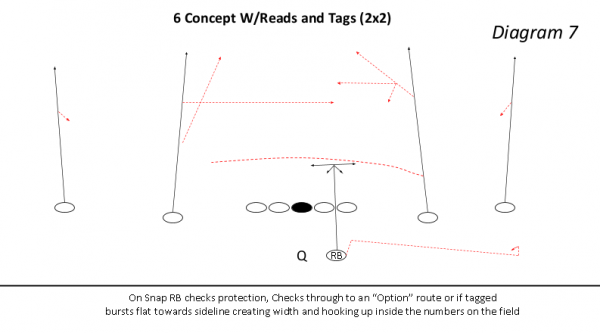 Most of the tagged or “read” route variations on this play are for the Wide Receivers, which you can see with the red dashed lines in diagram.

The two run game staples in the Air Raid offense are the Draw and the Zone (sometimes with a read) play. The Draw play is a run play where the Running Back hesitates while the Quarterback and Offensive Line show pass to get the second and third level defenders to drop out and the first level defenders to pass rush up the field to create lanes for the Quarterback to hand the ball off to the Running Back.

The Zone play is a play that is run by just about everybody in America today. Linemen and Running Backs work in one direction, using what the defense is taught to do against them (fighting through pressure and reach blocks) to create openings and lanes for the Running Back to cut back into.

As with most things, the Air Raid is ever evolving as more and more coaches are putting their own wrinkles on it and creating and adapting the traditional Air Raid plays into their own to fit their own personnel.