At around 20 minutes before the game between Bronte and McCamey, the announcer came over the loudspeaker and asked everyone to vacate the stands. There was a massive thunderstorm rolling in, the clouds behind the home stands stood black, ominous, and headed this way.

Everyone got in their trucks or cars and herded towards the sole exit of the stadium when they heard of the possibility of hail. They scattered further into the city of Bronte, taking cover under the gas station pumps, the sides of buildings, anything that would offer their vehicles shelter from the probable chunks of ice falling to the earth.

As for me and the men I was with, we took cover in the bank teller lines. We waited out the storm and got dinner at the local Stripe’s, only one thing on our minds: how would this affect the Bronte-McCamey game? 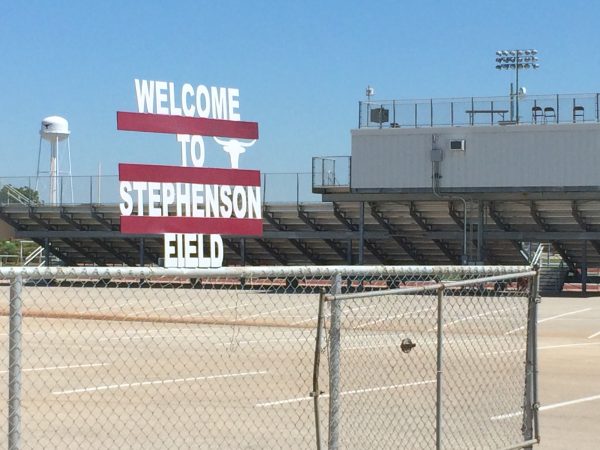 To some of us, homecoming doesn’t mean much. It’s inconsequential, a night to crown a homecoming king and queen, then have a dance the following night. No different than any other night.

In some elements, that view is accurate. There are things that you’ll see at every single homecoming across Texas. The girls will wear outlandishly huge mums, like comically huge. There are several girls in Bronte whose mums are bigger than their heads. Every school will crown a homecoming king and queen.

The differences come with the sizes of the towns; the smaller the town gets, the more homecoming matters. It’s a time where people legitimately come back home and reconnect with friends they haven’t seen in years. They see their families and the families of their friends. They take in how the town they grew up in, the town that helped shape them into who they are today, has changed.

It may sound strange to those of us from bigger cities, especially to those of us from the Fort Worths and the Houstons, the San Antonios and the Dallases. In the small towns that dot the vast expanses of Texas not covered by the metropolitan areas, it makes all the sense in the world.

I’m riding along with David Phillips and Corby Kelso, both of whom attended and played for Bronte in the ’80s. Corby (who, naturally, goes by Kelso) still lives in Bronte, and his son is starting at middle linebacker for this year’s edition of the Bronte Longhorns. David lives in Austin, and by his own admission hasn’t been back in over ten years.

We pass an old field overrun with weeds, a defunct scoreboard in the end zone signifying that at one point, the Longhorns played or practiced here. There are two small equipment sheds with the Longhorn’s logo emblazoned on the side, and a massive scar in the ground where the school holds their homecoming bonfire.

“Man, I remember in two-a-days when Sandusky (no relation to Penn State) had us run from the practice field to here in our cleats on this hot concrete. We had blisters for weeks!”

The two men laugh uproariously, all the memories of the ’80s coming back in spades. They speak fondly of the old train tracks, and of their rivalry with nearby Robert Lee. They talk about old friends that they’ve seen today, how everyone’s children are doing, and how their jobs are going. The distance and time hasn’t dampened the bond of their childhood days together. They see a last name on the roster they don’t recognize, and attempt to figure out when that family moved to town.

They introduce me to their old coach, Coach Sandusky, who at 82 still attends Bronte games. They chuckle about old times when they got in trouble with him as we explore the grounds and see all the new additions the high school relatively recently gained. They comment on the new turf field, and how it must be nice to not have to pick burrs out of your socks after practice. They talk about the stands, which have seen some renovations that include a revamped concession stand and nicer bleachers. 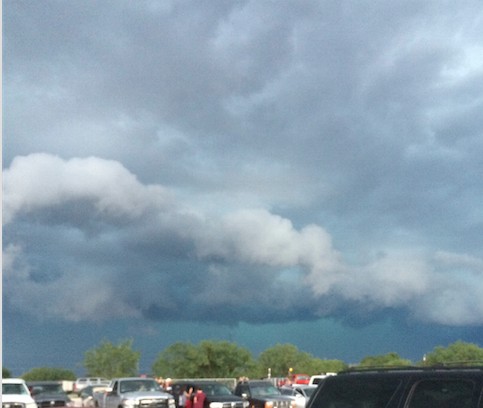 We’re standing outside the Stripe’s, and the sky has been black since around 6:30 PM. More or less all of West Texas is in a rain delay. Many games won’t finish until after midnight. It’s there that we get the word: the game will start at 8:45.

The game itself might as well have been played on the moon. The rain is coming down heavily, and Bronte blocks the opening McCamey punt, punching it in for a score. Kelso’s son, Carson, is all over the field, making hard tackles and nearly intercepting passes.

“The whole town is together. The whole town shuts down to come to these games. The younger kids are more a part of Homecoming here than in other places, here everyone is involved,” says David. “It’s nice being back with all the guys I grew up with, and even those in the generation ahead.”

The town of Bronte is at a crossroads. In the next few years, they’re likely to move down a classification. The next classification down is six-man football.

“There’s just not a lot of kids these days,” says David. “They’ll play schools with twice the amount of kids as them, and they’ll be taking it to them.”

David isn’t lying. McCamey has a solid crowd for their size, their town being three hours away, and it being pouring rain. The Bronte kids have a solid amount of players for a school of their size, but there are few in the junior high system. Changes might be inevitable for Bronte due to the smaller class sizes.

The Bronte kids are tough, they keep forcing McCamey fumbles and stopping them on 3rd and short. Bronte looks to take a 19-0 lead into halftime, but a fluke pass that barely misses Carson Kelso’s outstretched fingers falls into the lap of a McCAmey receiver. The receiver turns towards the end zone, and is upended and loses the football three yards from the goal line. The ball falls neatly into another McCamey receiver’s waiting arms. It’s a touchdown for the Badgers, and they’re back in the ball game. The two-point conversion falls short, and the score at the half is 19-6.

The rain begins to fall harder.

The game is called at halftime. It’s 10:30, Bronte still has to go through homecoming festivities, and the McCamey faithful have to drive with the storm to get home. It’s a smart, sensible move. Bronte was clearly in the lead, and there’s no need to put any more at risk.

There’s a cliche phrase that nearly every “in” group says to justify their actions.

There are very few things in life that this phrase actually applies to. There are many who have used this to justify actions that would’ve never flown in the real world.

There’s always a stigma about going back to the hometown to relive the past. It’s said to be done by those who can’t let go, those who want to relive what was, sadly, the best times of their lives.

For some, that may be true. However, I saw the opposite in Bronte.