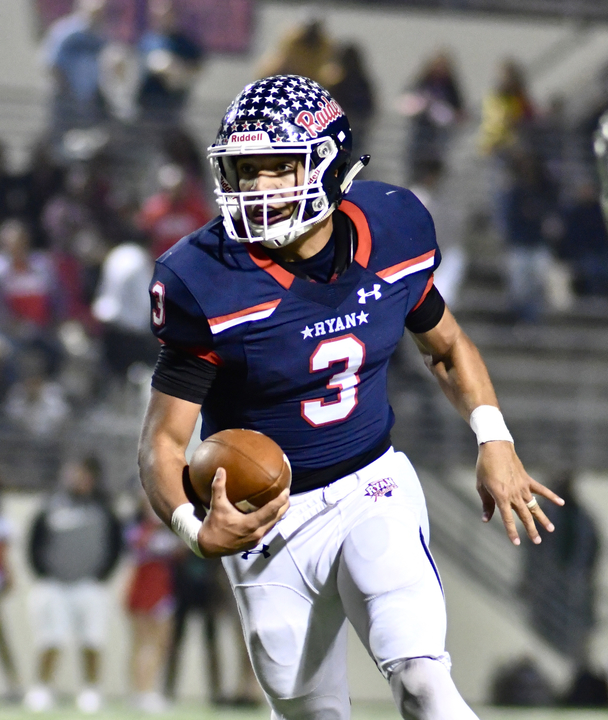 In a regional championship matchup, Emani Bailey totaled 331-yards leading Denton Ryan to a 56-10 victory over Colleyville Heritage. Bailey had 20 carries for 275-yards, two receptions for 5-yards, and five touchdowns throughout the game.

Colleyville Heritage’s Chad Turner broke away on a kickoff return for 87-yards giving the Panthers momentum. However, the Panthers were forced to settle for a field goal.

Denton Ryan’s Bowman Jr. followed with his own big kickoff return for 53-yards. Drew Sanders ended the drive with a touchdown to give Denton Ryan a 21-3 lead ending the first quarter of play.

The second quarter saw more athleticism from the Raiders with a one-handed 50-yard reception from Ja’Tavion Sanders, a Bailey 55-yard touchdown run, and a Drew Sanders touchdown. Denton Ryan went into halftime with a 35-3 lead over Colleyville Heritage.

On his five touchdowns, Bailey said “it feels great” and gave credit to his front line for leading him “to the promised land.”

Drew Sanders looks forward to Denton Ryan’s matchup against Frisco Lone star next week. Sanders says “We know it’s going to be a challenge and we look forward to proving people wrong next week.”

Denton Ryan will face Frisco Lone Star next Friday at Allen in a semifinal matchup. Kickoff is slated for 2 p.m.