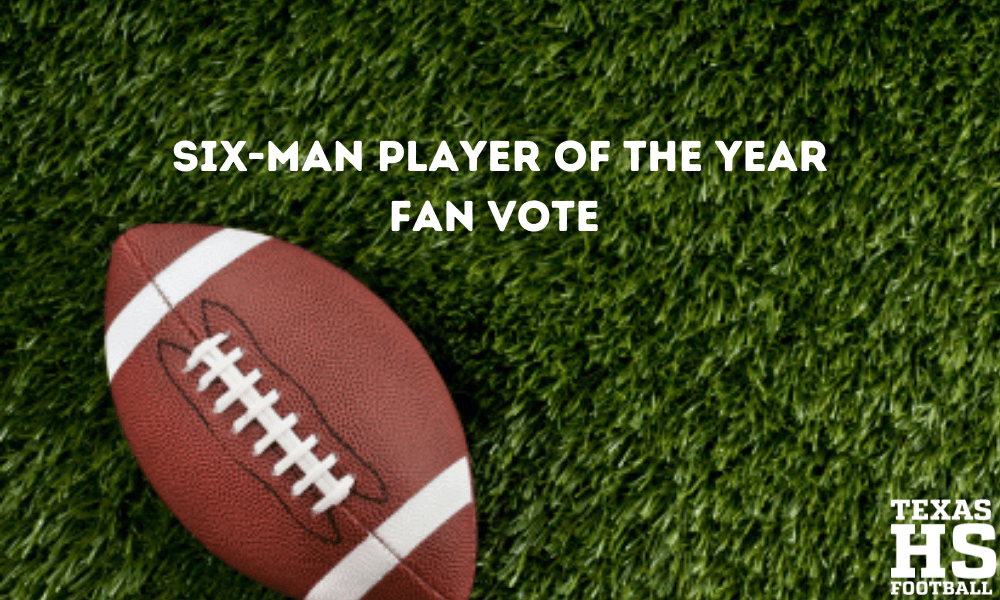 The six-man football state title games are set with Westbrook and May and Strawn and Motley County set to battle for the 1A Division I and 1A Division II state titles respectively on December 15.

But with those games still a week away, it’s time to look at the top players in six-man football this season.

Cast your vote below for who you think should be our 2021 Six-Man Player of the Year. This is for fun. Vote as often as you’d like (refresh your browser to vote again).

Led Klondike on the ground while also pitching in at quarterback as the Cougars made a run to the state semifinals.

Led Gorman’s backfield as the Panthers finished 6-4 and earned a playoff spot.

Led the Coyotes with 824 passing yards, 1,845 rushing yards, and 62 total touchdowns as they made a run to the state semifinals.

The top receiver for the Eagles this season as well as an impact player on the defensive side of the ball.

Led Knox City’s passing attack with 1,528 passing yards and 27 touchdowns as the Greyhounds finished 5-6 and earned a playoff spot.

A key cog for Jonesboro as he finished with 703 passing yards and 1,070 rushing yards as the Eagles went 11-1 on the season.

A key player in Balmorhea’s state title game run last year, he was just as dominant running the football this year as the Bears finished 9-2

Led the Eagles’ passing attack this season as they advanced to the area round after a thrilling 70-69 win over Garden City in the bi-district round.

Starred at running back for the Wolverines while also contributing at quarterback as Springlake-Earth finished the season 9-2.

Has helped lead May back-to-back state title games with his contributions in the rushing attack, receiving game, and in the secondary.

Led Rankin with 2,874 rushing yards, while also pitching in with 52.5 tackles defensively.

Starred at running back for the Coyotes with 1,788 rushing yards and 25 touchdowns as Borden County finished the season 6-6.

Led Abbott with 1,598 rushing yards, including 491 in his last two games, as the Panthers made a run to the state semifinals before being defeated by May.

A key player for the Greyhounds on both sides of the ball, leading their rushing attack and making plays from his linebacker position defensively.

Led Avalon with 1,406 passing yards and 984 rushing yards as the Eagles finished 6-5 on the season.

Motley County’s main man from his running back position, he will look to avenge the Matadors’ 2019 state title game defeat when they take on Strawn next week.

Has stepped up in a big way for the Greyhounds in their backfield, including a 292-yard, six-touchdown rushing performance against Richland Springs last week that earned Strawn a spot in the state title game.

The other half of the Rigdon brothers, he has been just as big of a contributor out of the backfield for Strawn, rushing for 191 yards and four touchdowns last week against Richland Springs.

A key player on the Tiger defense from his cornerback position, he leads May in tackles on the season.

Led the Cowboy passing attack as they made an impressive run to the state semifinals, finishing the season 10-5.

Led Oglesby in passing yards and rushing yards, while also contributing from his safety position as the Tigers advanced to the area round thanks to their first-ever win over Calvert in the bi-district round.

Put up big numbers for the Warriors this year as he threw for 1,742 yards and 21 touchdowns and added 1,138 yards and 15 touchdowns on the ground.

A force on both sides of the ball for the Wildcats, he rushed for 258 yards and six touchdowns against Happy in the state semifinals to earn Westbrook’s first-ever state title game appearance.

Water Valley’s main man out of the backfield and also a key player at linebacker defensively, he helped lead the Wildcats to a 12-1 record on the season.

Rushed for 1,464 yards and 37 touchdowns on the season as Loraine finished 8-4 and advanced to the area round of playoffs.

Threw for 1,363 yards and 35 touchdowns while adding 782 yards and 16 touchdowns on the ground during the regular season as Benjamin went 10-1 after being knocked out in the bi-district round of playoffs.