In Houston in 1985, the local sports scene was in shambles. The Astros finished fourth in their division. The Oilers were a dismal 5-11. Local college teams were trash: the Houston Cougars were 4-7. Rice was 3-8. And, Texas Southern was a miserable 1-10. But one local team played before a packed house every week, dominated opponents with ease on defense and dominated the sports page. History was made that season. That team was the Houston Yates Lions.

Named the “Team of the Decade” of the 1980s, Yates steamrolled through their schedule on their way to an undefeated 16-0 season. The Lions scored a whopping 659 points on offense. The beholder of this incredible collection of prep talent was head coach Luther Booker.

The defense, known as the “Crush Groove”, would allow only 79 points scored against them (an average of 4.8 points per game) all season under Defensive Coordinator Ronald Miller. They pitched an unbelievable eight shutouts, including three in the playoffs. The Lions also recorded an incredible 107 sacks.

The linebacker unit was filled out by Kenneth Payne and Chris Gardner. With Foster, the linebacker crew was one of the best in the state.

Santana Dotson, a future All-American at Baylor and NFL veteran, played some coming off the bench. That says something about the amount of talent that played in front of him.

As number 66 in the Yates game program, Foster’s jersey number might as well have been “666”. One could say he played like a demon possessed-a demon that could not be exorcised by any of Yate’s 16 opponents that year.

Two things happened that planted the seed of desire to win it all in ’85.

First, a playoff loss to Madison the year before would leave a bad taste in their mouth. Second, the Texas legislature passed H.B. 72, known as the “No Pass, No Play” eligibility rule.

The players, led by Foster, were the checks and balances on each other’s study habits and their classroom performance. Scrimmages at practice were a lesson in hard work and running the plays to perfection.

Yates would roll through their side of the playoff bracket like Patton’s tanks, recording three shutouts. Their first two playoff games they outscored their opponents 94-0, and outscored the rest of the field 168-28, leading up to the Big Game in Big D.

Game Day, 5A State Championship Game: The Lions traveled to Irving and the famous edifice that was Texas Stadium to take on powerhouse Odessa Permian, winners of four state championships and three runners-up finishes.

Shockingly, the first quarter ended in a 0-0 stalemate. It was the first time that Yates was held scoreless all season. But that all changed, and quickly.

By the second quarter, the spirit of Permian known as the MOJO, had been sucked out of the opening in the state-of-the art roof of the Cowboys home venue. Yates would run the score to 23-0 by the middle of the 3rdquarter, on their way to a 37-0 rout of the defending 5A state champs.

It was the first state championship for a Houston ISD school since 1953.

Bailey rushed for 190 yards, including a 74-yard touchdown run. Price threw a TD pass to Alexander. Smith added a 20-yard field goal. And, Reginald Breggs returned an interception 22 yards for a score.

The Lions forced three Permian interceptions and recorded an insane 20 tackles for loss.

Yates was stacked with 36 seniors, half of which played college ball, and most earned college degrees.

RB Johnny Bailey: 3-time winner of the Harlon Hill Trophy, awarded to the Div. II Player of the Year, while a star at Texas A&I. He rushed for over 200 yards in each of his first four games as a college back. He would finish his career with 6320 rushing yards. Bailey was inducted into the College Football Hall of Fame in 2000. Sadly, Bailey died of pancreatic cancer in 2010.

QB Charles Price: 25 TD passes during the regular season in ‘85.

DL James Goode-signed with Oklahoma and also played with the Atlanta Falcons.

Santana Dotson: signed with Baylor. Consensus All-American in 1991. Played in the NFL with Tampa Bay, Green Bay, and Washington.

LB Melvin Foster: THE leader of the team. Started every game since his freshman year.

The Greatest Team Ever?

Depending on who you talk to, Yates is considered to be the greatest team in Texas high school football lore. But those would be fighting words among the fans of Dallas Carter (1988) and Dangerfield (1983). But with the numbers that Yates put up and from a pure talent standpoint, they make for a compelling argument.

Material for this article was sourced from: 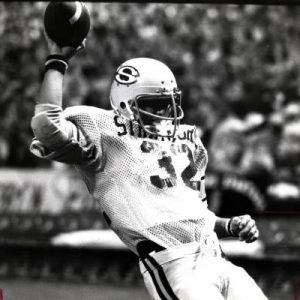 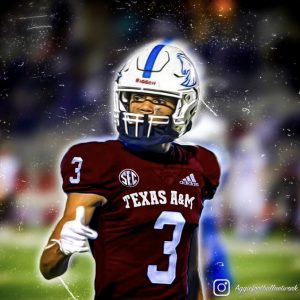 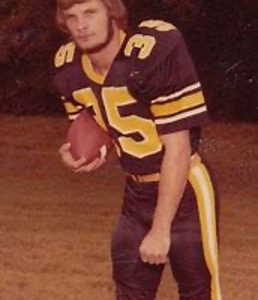 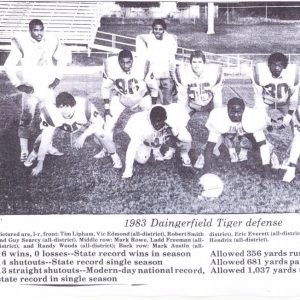 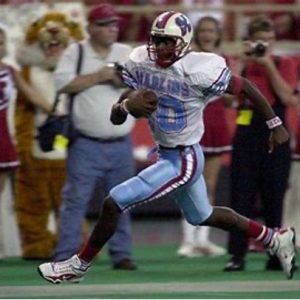