In Order To Win Games, Communication Is Key

Technology continues to extend its reach and influence into sports, and football coaches are a hungry and willing audience to embrace it and apply it as part of their strategy to win games. As a communication resource, technology is a key player in the headsets a coaching staff uses along the sidelines during a game or practice. The reliability of a coach’s equipment is as important as that of his staff and players.

Headsets are arguably the most crucial part of any football program. However, coaching staffs are quickly incorporating the use of drones and end zone cameras to help facilitate player instruction and team performance.

“Communication between coaches is critical to make sure that a team is functioning as a cohesive unit,” says Matt Starr, President CEO of Sideline Power. “For some coaching staffs, trading in their headset equipment annually or every couple of years is a part of their regular programming budget, and lets them take advantage of the latest improvements in communication technology,” he says.

The increasing interest in upgrading headset technology caused Sideline Power to introduce a trade-in program, much like a trade-in on the purchase of a new car. Sideline Power completely refurbishes the used equipment and makes it available at discount prices. What some coaching staff’s view as old equipment others view as a valuable upgrade. The program allows coaches with smaller budgets the ability to afford more cutting edge technology

The connection between coaches is not the only one that matters. Timely communication between coaches and players is equally important as a means of providing feedback to players and making quick adjustments in strategy. The Coach to Player system (C2P) by Sideline Power integrates with any headset on the market and provides simultaneous connectivity to any number of coaches and players.

“When everyone is part of the instruction, then coaches can maintain the tempo of practice while instantaneously providing athletes with feedback and coaching,” Matt Starr says.

Coaching from the sidelines provides a limited perspective of the game, and now coaching staffs are incorporating drone technology into their arsenal. Drones offer many advantages over a fixed camera system; mainly their mobility. Because a drone is free to move around above the field, video can be captured from any angle and any height. Utilizing a drone allows the videographer to stick with the action on the field so it’s never out of frame. Sideline Power’s DJI Phantom 4 incorporates a feature called ActiveTrack. ActiveTrack doesn’t use a band or beacon to track subjects. The pilot merely outlines the subject to follow on the screen and Phantom 4 does the rest. To get a better overall sense of how a play unfolds a drone pilot might choose to keep the drone stationary instead of following a single player.

The main advantages of end zone cameras are ease of setup, ease of use, and run times that cover practice and game lengths. The tripod is a critical component with stationary cameras. Coaching staffs also have to decide on whether to use electronic or manual pan/tilt controls. “Electronic pan/tilt modules are simple and easy to use, but tend to be slower to operate. This means it can be harder to keep up with fast paced action on the field of play” Matt Starr says. “Manual pan/tilt systems, on the other hand, are extremely reactive and move as fast as the camera operator.

As technology evolves so does its role and the value it plays for coaching staffs from high school to the pros. According to Sideline Power, the past five years have seen a tremendous wave of innovation, which has influenced how it supports football and other sports.

Can the Lake Travis Cavaliers Make it Nine in a Row Against Westlake? 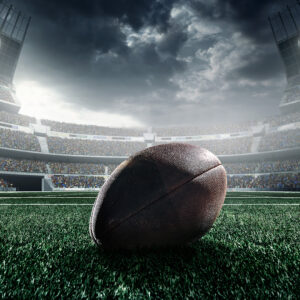