Defense of #2 Team in Texas Stops #4 Team, Gives them 1st Loss of Season 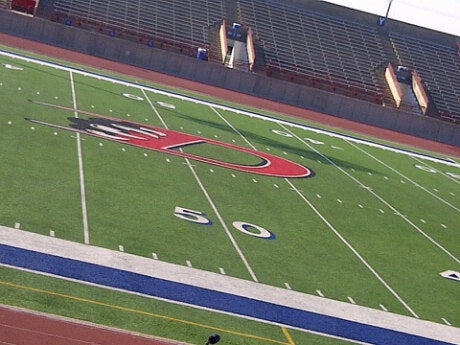 Duncanville has been in our Top 5 all year and is either number one or number 2 behind North Shore in most rankings. Cedar Hill is a bit of a different story.  They started the season outside of our Top 10, but moved up each week.  After their 49-42 win over DeSoto last week, they moved up to #4 in our rankings and were tied for first with Duncanville in District 11-6A.

Duncanville outscored district opponents 277-13 last year and have not lost a district game since 2016, but Cedar Hill gave them a challenge and it looked like Cedar Hill might pull off the upset and had a chance to take control of the game early.

Duncanville fumbled on the first possession of the game, giving the Longhorns the ball inside the 30-yard line. However, the Panthers defense held strong and limited Cedar Hill to a field goal attempt, which they missed. Cedar Hill had another chance to get the first score of the game a few minutes later, and this time they capitalized when Kaidon Salter scored on a 1-yard run to put the Longhorns up 7-0.  The touchdown capped off a 12 play 53-yard drive.

Duncanville tied then took the lead back quickly, going up 14-7.  Cedar Hill had great field position all half but was not able to capitalize.  Late in the half, the Longhorns did end up finding the endzone again when Salter hit Jayden Moore for a 32-yard touchdown.

Duncanville was led on offense by Malachi Medlock. He finished with 182 yards on 21 carries and three touchdowns, He had the Panthers up 21-14 in the 4th quarter. Cedar Hill was driving for the tying touchdown when the Duncanville defense stepped up and caused a fumble that they recovered at their own one-yard line.  There was then a controversial play on Duncanville’s next possession in which it looked like the quarterback fumbled in his endzone or may have intentionally grounded the ball, but it was ruled an incomplete pass as he was outside of the pocket and appeared to attempt a shovel-pass in the direction of an eligible receiver. A few plays later, Medlock put the game out of reach with his third rushing touchdown.

Cedar Hill may be left with a lot of “what if’s”. They had the ball in great field position several times and did not capitalize.  They also had the fumble at the 1-yard line and the controversial incomplete pass that could have been a fumble.  However, the story of the game was the dominant Duncanville defense and their outstanding run game.  Duncanville has a strong case as the best team in the state of Texas.

Up next for Duncanville is Mansfield Lake Ridge and then a showdown with DeSoto on the 27th.  The Panders are in the driver’s seat to win the district, but a win over DeSoto will clinch it.  Cedar Hill has the toughest part of their regular season complete and with three games left, they should finish 8-1.  They play at Waco next.  Waco won their first game of the season, 32-23, over West Mesquite, but has struggled since and is 1-4.