After the 1A-4A state title games in mid-December and Balmorhea’s victory over Richland Springs in a make-up title game in early January, it is now time for the largest schools in Texas to play for the biggest prize in Texas high school football.

The 5A games are first up on the docket, scheduled to take place this Friday. There are plenty of storylines as two accomplished programs square off in one title game, while a history achievement is on the line in the other.

Here is what to watch for in the 5A state title games.

Tale of the Tape: On paper, this matchup features the biggest gap in program prestige as Aledo seeks its record 10thstate title against a Crosby team that is returning to the state title game for the first time since 1960 and is seeking its first ever state title. After losing the 12-5A Division II district title decider to Nederland in the final regular season game, Crosby has rattled off five straight victories, including a 62-61 overtime thriller over Liberty Hill in the semifinals. Meanwhile, Aledo has made the state title game seven of the past eight years and is led by its explosive offense averaging 48.7 points per game.

Players to Watch: The Crosby offense lives and breathes through its dynamic backfield duo of Deniquez Dunn and Reggie Branch. Branch started at quarterback throughout much of the regular season, but Dunn has taken over in the postseason to great success. Dunn has thrown for 1,621 yards, rushed 909 yards, caught 36 passes for 401 yards, and totaled 42 touchdowns this season, while Branch has contributed 1,527 passing yards, 1,661 rushing yards, 407 receiving yards, and 42 touchdowns himself. They are a true do-it-all tandem. When Branch or Dunn aren’t making plays, look for receiver Jaylen Herman, who leads the team with 1,262 receiving yards and 14 touchdowns, or the explosive Kameren Kirkwood, who had a 74-yard kickoff return for touchdown last week, to have the ball in their hands. When the Aledo offense takes the field, they will have to deal with Crosby’s two talented defensive ends McCoy Casey and Wade Lewis who have combined for 47 tackles for loss and 12 sacks this season. Meanwhile at linebacker, Trevon King has been a steady presence for the Cougars this season with 113 total tackles and 18 tackles for loss.

Aledo has two talented playmakers of its own to do battle with the Cougars in Alabama commit wide receiver JoJo Earle and Lamar commit running back/cornerback Demarco Roberts. Both have been varsity contributors over each of the past four seasons and both bring plenty of speed and explosiveness to the Aledo offense. Much of the Bearcats’ success begins with these two players. “We would not be in the state title game without JoJo and DeMarco and their offensive line, lead by Rocco O’Keefe,” Aledo head coach Tim Buchanan said. Over the course of Aledo’s five playoff games, Roberts has rushed for 1,020 yards and 17 touchdowns, while Earle has contributed 316 yards receiving, 166 yards rushing, and nine total touchdowns. Behind center, Brayden Fowler-Nicolosi stepped into the starting role in mid-November after moving in from California. He has led the Bearcats throughout the playoffs and, while Aledo loves to rely on its ground game, he has taken care of the football, throwing for 691 yards and five touchdowns with no interceptions during the playoffs. Defensively, North Texas commit defensive end Chris Wright and LSU commit safety Bryan Allen Jr. are two highly rated players to watch out for on the Bearcat defense as they try to stop Crosby’s high powered attack led by Branch and Dunn.

With Aledo searching for its 10th state title overall and its ninth in just twelve years, Crosby will be considered the underdogs heading into this one. However, that is a role the Cougars have excelled at as, despite finishing as runners-up in their district, they have knocked off four straight district champions just to get to this point. Aledo is a formidable opponent, but Crosby will assuredly be ready to battle in this one as it seeks its school’s first ever state title in any sport.

Tale of the Tape: Denton Ryan came agonizingly close to its first state title since 2002 last year, but the Raiders couldn’t complete their Hail Mary attempt in a narrow 28-22 defeat to Shadow Creek. If they want to earn that state title, they will have to overcome a talented Cedar Park side. The Timberwolves reached their first three state title games in the 2010s, going 2-1 with their last appearance ending in a 22-6 victory over Frisco Lone Star in 2015. It will be an intriguing matchup as a Denton Ryan team full of offensive talent does battle with the renowned Cedar Park Black Rain defense.

Players to Watch: The Raiders have a wealth of talent offensively, especially when they go through the air. Quarterback Seth Henigan, a Memphis commit, leads the offense from behind center with 3,558 yards and 38 touchdowns on the season. He also has two talented receivers at his disposal in speedy Oklahoma commit Billy Bowman Jr., 1,144 receiving yards and 14 touchdowns on the season, and big Texas commit Ja’Tavion Sanders, 1079 yards and 15 touchdowns this season. “These guys have all played together for a long time. Ja’Tavion and Seth since 6th grade. Billy and Seth since 8th grade,” Denton Ryan head coach Dave Henigan said. “All three have been on the varsity for three years. They have great chemistry. That’s a big a key as anything.” When it needs to run the ball, look for Hicks brothers to be a talented tandem out of the backfield as senior Ke’Ori, 816 yards, and sophomore Kalib, 751 yards, are the two leading rushers for the Raider offense. Defensively, Sanders and defensive tackle Bear Alexander have proven to be disruptive forces up front that the Timberwolves will have to deal with. Sophomore linebacker Anthony Hill Jr. is another key playmaker for Ryan, and he is joined in the linebacking corps by senior Rice commit DJ Arkansas, who returned a fumble for a touchdown in the semifinal win over Mansfield Summit.

The Timberwolves have a savvy quarterback of their own in three-year starter Ryder Hernandez. Hernandez has thrown for 4,240 yards and a remarkable 58 touchdowns to just two interceptions, a stat that Cedar Park head coach Carl Abseck described as “unbelievable.” Hernandez’s performances behind center have helped fuel a Cedar Park offense that has averaged 54 points per game this year. “Ryder has had a tremendous year and as a third year starter he has met our big expectations for him and exceeded them.  His leadership, decision making, and knowledge of what we want to do offensively has probably been what has been most impressive,” Cedar Park head coach Carl Abseck said. “He is a fantastic athlete, great arm, very accurate and can elongate plays to allow his multiple receivers to get open and make plays.  He has done a great job of taking what the defense is giving us, completing right at 70% of his passes.” Ryan will have to keep watch on a trio of senior Cedar Park receivers that have had a big season for the Timberwolves. Josh Cameron is Cedar Park’s career leader in receptions and has 1,169 receiving yards and 14 touchdowns this year and is joined by coach’s son Gunnar Abseck, 1,012 receiving yards and 15 touchdowns, and Jack Hestera, 979 receiving yards and 15 touchdowns this season. On the other side of the ball, the Black Rain defense will pose a challenge for Ryan’s high-powered offense. Linebacker Shelby Battles has made over 130 tackles on the year and anchors the team as a defensive captain. Up front, Hunter Hewitt and Ian Ferguson each have over ten sacks this season, while Murray Robinson has amassed nearly 30 tackles for loss. With this amount of talent up front, it is evident that the Ryan offensive line will have their work cut out for them on Friday evening.

With Hernandez and the Cedar Park offense putting up ridiculous numbers and Ryan’s trio of Division I athletes in its passing game, this game looks like it could come down to the very end as both teams will aim to add another state title to their trophy cabinets. 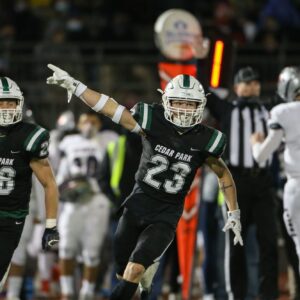 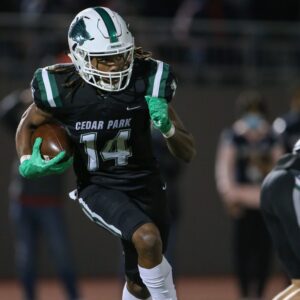 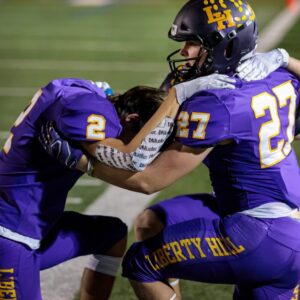