2022 Preview: Young Hitchcock Team Looks to Build off 7-on-7 Championship 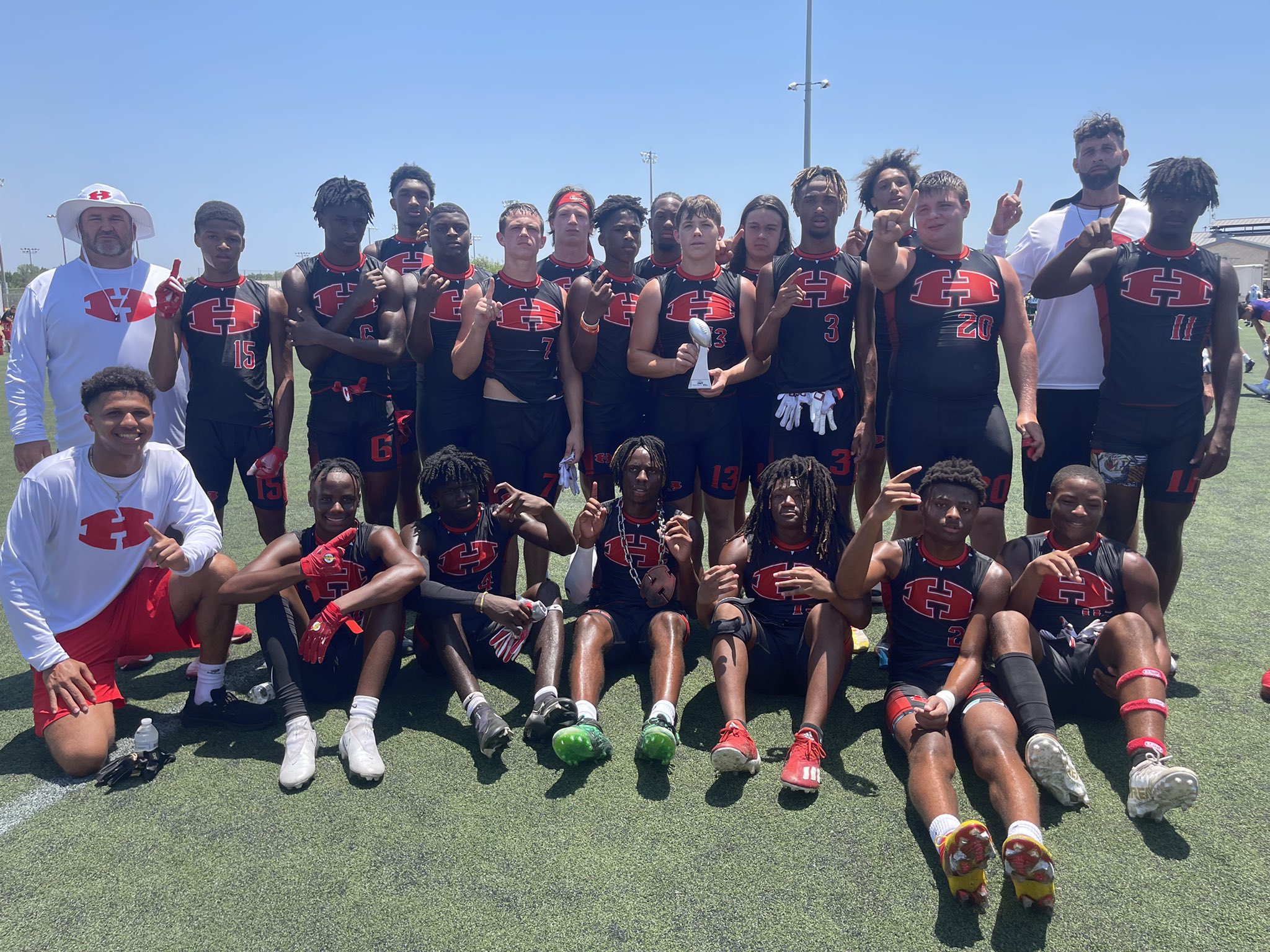 The weekend of June 25 was a busy one for the Hitchcock Bulldogs.

First, the Bulldogs went 8-0 in the state’s 7-on-7 tournament, winning the Division II title in a 33-6 win over Lorena. That game wrapped up in 100-degree heat around 12:30 in the afternoon.

Seven hours later, six of the members from that team were playing for Hitchcock in the 2022 TABC Showcase, a UIL sanctioned basketball tournament, after travelling from College Station up to Duncanville during the afternoon.

That basketball team finished 3-0 in its three contests spread across three days, wrapping up a perfect weekend for the Bulldogs.

“We were proud of the kids,” Hitchcock head coach Craig Smith said. “You know, they went from the heat to running up and down the basketball court. They love the competition, and they just go out and get after it. That’s what you love to see.”

Hitchcock is a small town located in Galveston County about 35 miles southeast of Houston. The Bulldogs have made the playoffs six of the last seven seasons but haven’t won a playoff game since 2017. Last year, they finished 5-6 before falling to eventual state champion Lorena in the first round of playoffs. 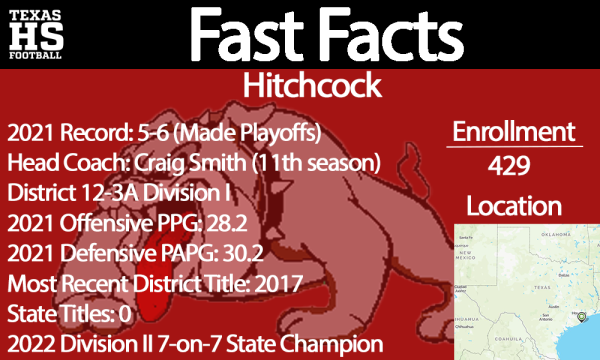 However, the group of players Hitchcock currently has is a special one. Smith said many of his players have been competing together since they were five years old.

“This group of kids, you know, things just don’t happen overnight,” Smith said. “I’m a strong believer in the 10,000-hour rule. [And the parents] have played a key role in this from the time these kids were little. It’s a family atmosphere.”

At the end of last season, Hitchcock had seven starters that were freshmen. That means plenty of players return in key positions for the Bulldogs this year.

Hitchcock does have to replace its starting quarterback Christian Dorsey, but sophomore Lloyd Jones III is slotted to slide in behind center from his wide receiver position. Jones III played three games at quarterback last year while Dorsey was out hurt and threw for 911 yards and three touchdowns.

“We feel good about [the quarterback position],” Smith said. “We’re going to build around [Jones III].”

Fresh off their 7-on-7 triumph, Hitchcock’s skill positions are loaded with talent. Junior wide receiver Damien McDaniel and Bryce Dorsey combined for nearly 1,500 receiving yards in 2021.

Sophomore Kelshaun Johnson announced his arrival to the big stage by catching two touchdowns against Katy Jordan in his varsity debut a year ago. Meanwhile, fellow sophomores Cole Fisher and Elijah Sherwood, and junior Gatlin Smith, who Smith said has great hands, are all players expected to have an impact at receiver this year for the Bulldogs.

Up front, Albert Ruben III is back after earning second team all-district honors starting as a freshman a year ago.

All in all, Smith said he is excited about the potential of the Bulldog offense.

“We feel really good about our skill guys,” Smith said. “We’re hoping we’re going to be able to move the ball pretty efficiently.”

Defensively, the Bulldogs have some veteran experience as safety Taron Elam and linebacker Austin Gace both return after earning all-district honors as juniors a year ago. Although, Smith said there’s a good chance that Gace ends up playing defensive end this year.

And then in addition to his offensive prowess, McDaniel will be a threat in the secondary as well after he earned first team all-district honors at cornerback last year.

6-foot athlete has been impressive on both of the sides of the ball during the Bulldogs run to the #State7on7 semifinals. Hitchcock is loaded with underclassmen pic.twitter.com/eNvRkwCCZI

Looking forward to the fall, District 12-3A Division I will look similar for the Bulldogs as Boling’s departure to 3A Division II is the only change from a year ago.

But despite the fact the district is only comprised of five teams, a glance at each of their pedigrees indicates it will be a competitive one.

Hallettsville (2016), Hempstead (2011), and Yoakum (2016) have all competed in the state title game in the past 11 years, while Columbus made the state semifinals in 2019 and the Bulldogs reached the state quarterfinals themselves in 2015.

“It’s a pretty tough district, just quality programs,” Smith said. “They’re deep round playoff teams that we have to play, so we boosted up our non-district schedule just to get ready for the district gauntlet that we’ve got to go through.”

And with the depth of offensive weapons that Hitchcock showcased at the 7-on-7 tournament, there will be plenty of mouths to feed this fall. However, Smith said his team’s selflessness will be vital as they embark on trying to get their first playoff win in five years.

“Any given night somebody can lead the stat board, but our kids, they thrive on it all doesn’t have to be about themselves,” Smith said. “They don’t always have to have the light shining on them. And we preach that. I say we’re just a big family, and we’ll care about and love each other and give everything we got to make each and every one of us better.”

No off days…. DAWGS have to eat! pic.twitter.com/vr2uD8zyNs

9/23 at The Woodlands Christian Academy