Carolina Panthers’ safety Colin Jones has been mostly a backup in his five-year career. He has started just seven of the 75 games he’s been active for, but don’t let those numbers fool you. Jones has been a solid contributor when called upon in his career.

He’s recorded 21 tackles and an interception this season in a depleted Panthers secondary. Jones became a special teams star and backup safety with Carolina. According to an ESPN report Ron Rivera loves Jones’ multi-talented ability, “Colin Jones has been a big part of what we’ve done,’’ Rivera said. “Last year he showed that he’s a very versatile football player.

Long before he became a hidden gem for the Panthers, Jones became a well-known high school safety in Bridgeport, Texas. He owns the majority of Bulls rushing records, including the career total of 4,122 yards and 57 touchdowns. Jones played well enough to earn three-star honors according to 247 sports. The Bridgeport safety received four scholarship offers from major Div. I schools: Baylor, Purdue, SMU and TCU. Jones eventually decided to become a TCU Horned Frog. 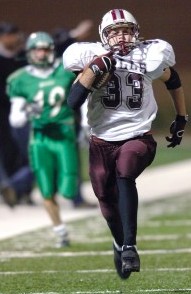 The Bridgeport native landed in Fort Worth at the right time. Jones helped the Frogs win two conference championships and a Rose Bowl. TCU compiled a record of 44-8 in Jones’s four years.

Jones became key run stuffer for TCU posting 11.5 tackles for loss and a nice pass-rushing option out of the secondary recording 3.0 sacks. After a strong career at TCU, the NFL came calling and the San Francisco 49ers drafted him in the sixth round. He would stay just one year with Niners before being traded to the Carolina Panthers in the offseason. In Carolina, he became a key contributor on special teams and an extra safety solidifying the Panthers’ backend.

Expect him to be active for Super Bowl 50 and a key special teams player for the Panthers.