6A No. 3 Allen mourns loss of player to gun violence

The Allen Eagles woke up Sunday morning to tragic news — one of their own had lost his life due to gun violence.

The news comes less than five months after A’mya Batie, a 16-year-old Allen cheerleader was shot and killed in Lewisville.

Just one day after beating Sasche 55-20 to advance to the area round of Class 6A, Division I playoffs, Allen suffered a huge loss as Marquel Ellis Jr., a sophomore wide receiver, was the victim of a shooting in Plano on Saturday evening.

Ellis was transferred to an area hospital where he later died as a result of his injuries. Friends and coaches across social media shared posts honoring Ellis:

Allen Football’s head coach, Terry Gambill, has described Ellis as somebody who everyone got along with.

“His teammates loved him,” Gambill told Dallas Morning News on Sunday. “He loved his teammates, really just a good athlete; a good person.”

“We were notified earlier today of the tragic event that took the life of Marquel Ellis, Jr. was a sophomore at Allen High School. The school has arranged for counselors to be available for students and staff on Monday morning.”

Police have not yet identified any suspects on this case. 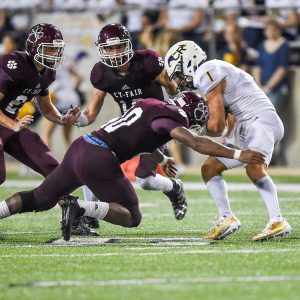