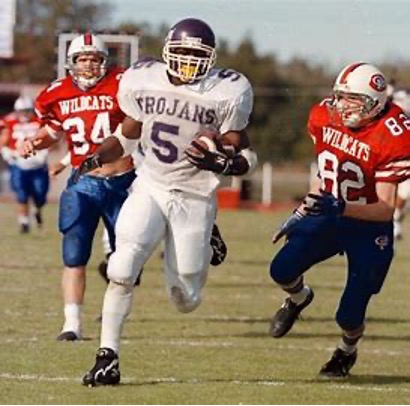 He played linebacker as a sophomore and fullback as a junior. A move to tailback for his final year at University High in Waco, TX put him on a path to the Pro Football Hall of Fame. He is LaDainian Tomlinson.

At 5-10, 190 pounds, Tomlinson was moved to tailback for his senior year. The Trojans pitched four shutouts in their first five games. They outscored their opponents 222-2 in those games and amassing a 12-2 record.

Tomlinson scored 230 points and recorded seven games of 200+ yards rushing, on his way to 2554 rushing yards and scoring 39 touchdowns. He was named district 25-4A MVP, 1st Team 4A All-State, 4A Offensive Player of the Year, and the Super Centex Player of the Year.

Not too shabby for someone who hadn’t been the feature running back before.

That year, he went on to rush for 1974 yards on 304 carries and scored 20 touchdowns (which led the NCAA) and was named the WAC Offensive Player of the Year. He averaged 6.5 yards per carry.

In 2000, his senior year at TCU, Tomlinson led the NCAA in rushing with 2158 yards on 369 carries and 22 touchdowns, averaging almost six yards per carry.

He recorded four games over 200 yards rushing. His high game that season was 305 yards and 3 touchdowns against UTEP, averaging a whopping nine yards per carry.

The Horned Frogs finished season of the new millennium with a 10-1 record.

He was named a Consensus All-American and winner of the Doak Walker Award as the nation’s top college running back. Tomlinson finished fourth in the Heisman voting that year.

Tomlinson was drafted in the 1st round (5th overall) by the San Diego Chargers in the 2001 NFL Draft.

Tomlinson rushed for over 1100 yards in eight of his 11 seasons in the NFL, including 1236 yards and 10 touchdowns in his rookie year. For his efforts, he was named to the 2001 NFL All-Rookie Team.

Tomlinson rushed for 1645 yards and 13 touchdowns in 2003, and caught an amazing 100 passes for another 725 yards and 4 touchdowns. He recorded five games with 200+ yards from scrimmage that season.

In 2006, Tomlinson rushed for 1815 yards and 28 touchdowns, leading the NFL in both categories. He also caught 53 passes for 508 yards and eight more scores, and scored 186 points, which also led the league.

That production earned him the NFL MVP, garnering 88% of the vote.

During that same season, he was also named the NFL Offensive Player of the Year, Walter Payton Man of the Year, and 1st team All-Pro.

He was inducted into the Pro Football Hall of Fame in 2017 on his very first ballot.

Tomlinson is also a member of the following:

To say that one year as the starting running back his senior year of high school paid off would be a gross understatement. The move helped LaDainian Tomlinson become one of the best running backs to ever play the position, both as a collegiate player and as a professional.

Tony Thomas is a freelance writer. He writes about college football on his own website, www.thegridironnews.com.