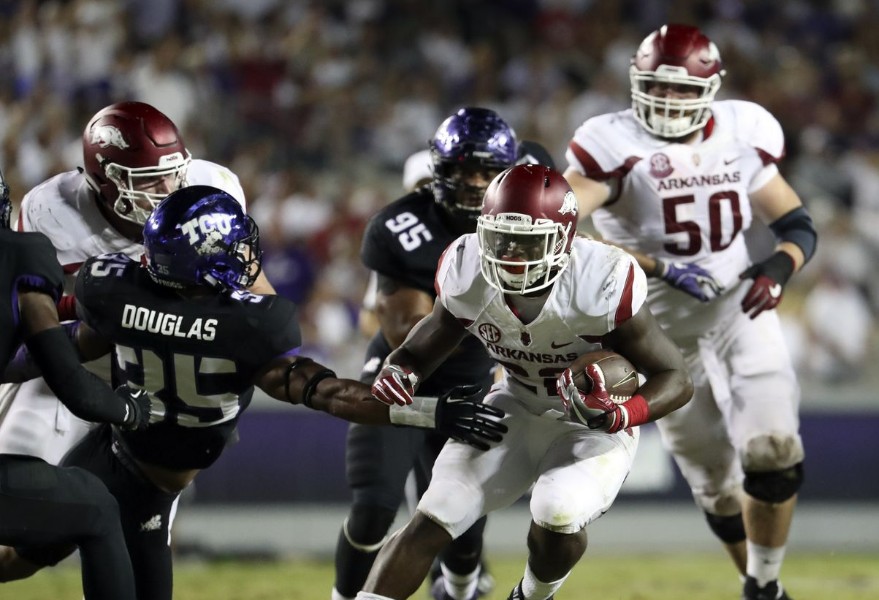 The last time Gary Patterson played Arkansas coach Bret Bielema was during the 2011 Rose Bowl, when TCU had a perfect season and beat Wisconsin.

The last time the Horned Frogs lost a home game was in November of 2013.

Time has a funny way of changing things. Kenny Hill no longer plays for A&M, Bret Bielema doesn’t coach at Wisconsin, and the Horned Frogs no longer have a 14-game home winning streak.

Arkansas gored the Horned Frogs in a double overtime upset in Fort Worth Friday, winning 41-38. It was the Razorbacks fifth win over a ranked team as an unranked program since 2014.

The first three quarters were a dull affair, with Arkansas’ “ground and pound” wearing down the Horned Frogs experienced defensive front. The Razorbacks had a first-half shutout, and the TCU offense was a mess; quarterback Kenny Hill made poor reads, threw into coverage, and was careless with the ball — emphasized by an interception caught by Brooks Ellis that was returned for a 47-yard pick-six.

Trailing most of the game, Kenny Hill’s spread offense suddenly awoke in the fourth quarter, embarking on a 27-point run.

With only 16 seconds left, TCU kicker Ryan Graf had a chance to boot the game-winning field goal, but was blocked by Arkansas OT Dan Skipper. The momentum drove the Razorbacks into two overtimes, where quarterback Austin Allen’s five-yard touchdown gave them a 41-38 edge.

Hill finished with 377 throwing yards and managed one touchdown to Taj Williams in the first overtime, but was unable to score in the second.

The Big-12 picture is now a mess after losses to Arkansas, Houston, and Central Michigan—defeats received without facing the real challenges of the conference schedule. Texas and Baylor are the only ranked undefeated conference teams.