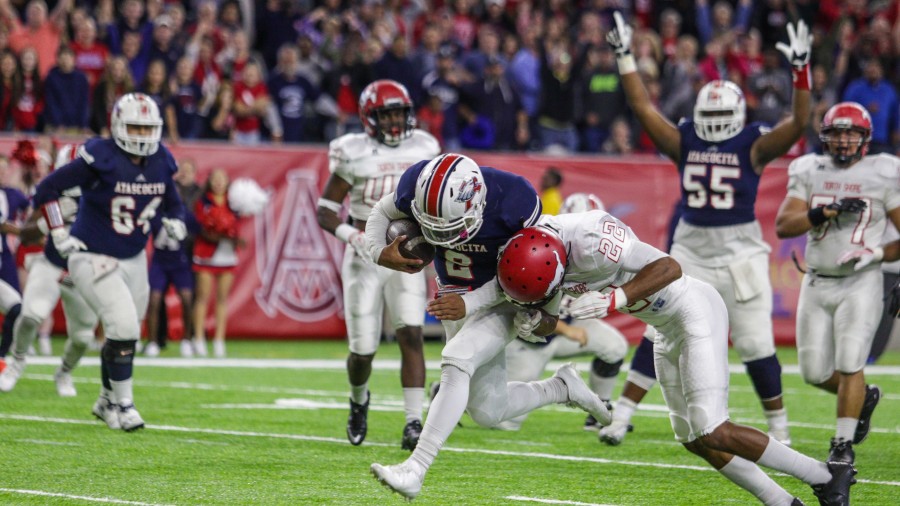 Atascocita dethroned defending State Champion and district rival North Shore 33-27 in an overtime spectacular Friday night at NRG Stadium. One week after stuffing the Katy Tigers on a decisive goal line stand, the North Shore defense bent in the closing moments of regulation before finally breaking in overtime. In a battle between two dual threat quarterbacks, Atascocita’s Daveon Boyd emerged triumphant. Boyd now reigns supreme not only in District 21-6A, but in all of Region III as well.

Boyd’s conquest was anchored by an all-encompassing aerial attack that amassed 349 yards passing. This was in stark contrast to the 117-yard average allowed by the Mustangs pass defense this season. The rocket launching Boyd simply knew no bounds. Three of his targets accounted for 88 yards receiving or more. Among them were wide outs Griffin Hammond, Alerick Soularie and Lujuan Winningham. Winningham lead the Eagles receiving corps with 158 yards and one touchdown. Though he landed significant blows through the air, most of Boyd’s damage was delivered on the run. The versatile signal caller punched in three rushing touchdowns. With his 93 rushing yards, Boyd finished the evening with a staggering 442 yards of total offense.

North Shore quarterback Bryant Badie also exhibited a talent for slinging the ball around the field. Badie was 21-24 passing with 307 yards and one touchdown. His top receiver Trevion Bandy snagged five catches for 97 yards. Badie likewise was able to draw blood as a ball carrier. His red zone rushing yielded two Mustangs touchdowns in the first quarter.

After capping their two opening drives with Badie touchdown runs, the North Shore offense began to slow down. The once porous Atascocita secondary started shoring up and forced Badie to take fewer shots downfield. The combination of tight coverage and a disruptive Atascocita pass rush kept North Shore quiet for the second and third quarters.

North Shore’s red zone defense showed signs of vulnerability that weren’t evident in its last game against Katy. The cracks began to reveal themselves in the first quarter. After handing Atascocita three straight stops on the two-yard line, a one-yard touchdown run by Boyd poked the first hole in the dam. That hole then gave way to another Boyd touchdown gash in the second quarter. At halftime, Atascocita and North Shore were tied at 14.

North Shore reached scoring position on each of their first two drives of the third quarter, but were forced to settle for a pair of Jonathan Rodriguez field goals. Down six, the Eagles were able to recapture fading momentum on a sixty-yard catch-and- run by wide receiver Lujuan Winningham for a touchdown. The timely score gave Atascocita its first lead of the game, 21-20.

Atascocita kicker David Heaton’s 21-yard field goal at the start of the fourth quarter narrowly increased the Eagles lead. The four-point cushion was not a comfortable one, though. Not when facing defending State Champion North Shore. With just over five minutes remaining in the fourth quarter, Bryant Badie and the Mustangs offense mounted a critical 11 play, 73-yard touchdown drive. The come-from-behind score came on a 17-yard pass from Badie to running back Kerrion Hadnot with 1:31 left in the game. Down by three, Atascocita would have less than two minutes to stave off elimination.

A North Shore facemask penalty during the ensuing kickoff gave Atascocita great starting field position near midfield. Boyd then started to effectively work the sidelines, picking up three quick first downs without burning much clock. Then, on a 3rd & 9 from the North Shore 23-yard line, the Mustangs were called for an agonizing pass interference penalty. The self-destructing foul awarded Atascocita eleven yards, moving the ball to the 12-yard line. Two plays later, the Eagles managed to avoid certain disaster. Daveon Boyd was somehow able to recover his own fumble as he was retreating deep into his backfield. Atascocita head coach Craig Stump talked about how things can change in an instant. He credited his team for being ready for anything.

“During the last drive of regulation, I think when Daveon scrambled, he was about to turn the corner and score” Coach Stump reasoned. “Then the ball came out of his hand. Now all of a sudden we’re behind the chains and we gotta kick a field goal. David came through and made a field goal to tie it up”

The beneficiary of a lucky hop, Atascocita retained possession and was poised to try for a game- tying field goal. Eagles kicker David Heaton delivered in the most pressure-packed of moments with a miraculous 36-yard field goal as time expired. Atascocita and North Shore headed into overtime tied at 27.

During overtime, each team is given a chance to score from the 25-yard line. North Shore took the first crack at the end zone. Badie dumped it off to Kerrion Hadnot on the first play for a 19- yard pickup. Then, on 1st & goal from the Atascocita six-yard line, Bryant Badie made his first mistake of the game. Thanks to a jarring hit from Atascocita’s “Angel of Death” Alex Morris, Badie fumbled and ultimately forfeited his team’s chance at points. Riding a high supplied by their playmaking defense, the Eagles took over. Defensive lineman turned running back Shannon Junior plowed ahead for 18 yards on first down. Atascocita lifeblood Daveon Boyd would then glide the remaining seven yards for the game winning touchdown. Boyd was happy to have shared such an amazing experience with his teammates.

“It was a great feeling” Boyd said with a hundred-yard smile. “This team battled the whole game. We were up, we were down, but this team persevered and we conquered it.”

The conquering Atascocita Eagles are 6A Division I Region III Champions. They advance to the State Semi-Finals where they’ll take on Region IV Champion Lake Travis next Saturday afternoon in San Antonio.