EDITORS NOTE: Every week, TexasHSFootball will present their official game ball honors to those that were the most impactful under the Friday Night Lights. Our experts watched numerous games and decided on the very best that the UIL Regional Final round had to offer.

Please post your game ball honorees below and tag @texashsfootball and use the hashtag #GameBallHonors through our various social media channels. Readers can also submit suggestions via email at [email protected] (no later than 4 p.m. each Sunday).

We’ll be sure to keep an eye on all suggestions — and possibly name them a Texas HS Football Game Ball Honoree or an Honorable Mention.

The Kemp-Grandview 3A Region II Final was an ideal playoff scenario as two district foes battled it out on a frigid Friday night in a defensive bout with yards and points coming at a premium. It would be Kemp that bested Grandview that night in a 13-10 victory with every facet of the team pitching in in order to gain the victory.

There were two plays, however, that stood out that garnered momentum for Kemp and that finally gave it a slight edge in this game and can be deemed as game-ball worthy performances.

Still a scoreless affair up until the first play of the second quarter, defensive back Brock Dedie came down with an interception in the end zone in order to keep the game scoreless and thwart Grandview’s attempt and scoring first.

The offense would then repay the efforts of the defense as Jordan Kempf gave Kemp the 6-0 edge on a 24-yard touchdown run to finally put the first points of the game on the board midway through the second quarter. — Jonathan Rodriguez

For Tanner Mordecai, its two for two in postseason Game Ball Honors. Especially after using his arms and legs — surprisingly more of the latter — to carry Waco Midway within two victories of a state title.

As the adage goes, “big-time players make big-time plays” and just when it seems like Southlake Carroll was about to flip the momentum in Saturday night’s game, he took the ball 46 yards for a Midway touchdown to regain the lead.

Mordecai finished the Dragons with a 9-yard touchdown run with 33 seconds left in the game. Perhaps more importantly, the Oklahoma commit threw for 191 yards and one touchdown, rushed for 122 yards and 4 touchdowns and lead the Panthers to a 42-28 victory over Southlake Carroll. — Garrett Ross

In a rematch of District 17-6A foes, Cy-Fair’s Kennedy bulldozed his way to 182 rushing yards and four touchdowns as his Bobcats beat Langham Creek in the Class 6A Division II Region III final Saturday at Cy-Fair FCU Stadium in Cypress.

Cy-Fair (13-0) will now face Austin Westlake (14-0), ranked third in 6A by the Associated Press, in the Class 6A Division II state semifinal game at 3 p.m. Saturday at NRG Stadium. — Prentice James

If “defense wins championships,” the Mart Panthers defense is in the process of providing evidence that this quote is factual.

Mart’s defense only allowed two touchdowns during district play and that dominance has carried over into the playoffs. The Panthers defense sunk the Crawford Pirates football season Friday night and only allowed one touchdown in the process 47-6.

The Panthers have one of the most statistically dominant defenses after posting 25 sacks, 14 interceptions, and allowing little more than nine points per matchup in 14 games in 2017. — Garrett Ross

Katy’s defense shined once again in a 31-3 defeat of Galena Park North Shore. The first-team unit hasn’t allowed a touchdown since Nov. 8 and continued that trend against 2020 5-star running back Zach Evans.

The Tiger defense clamped down in the first half, not allowing a first down until the second quarter. It also pressured the young backfield duo of Evans and quarterback Dematrius Davis into rare mistakes. Davis, who took over the quarterback position five games before meeting Katy in the regional final, had yet to throw an interception and Evans had earned a second impressive 1000-yard-plus season on the ground.

This guy is going to be great when he gets to Wisconsin. Watching him bowl over some of the players Steele has was almost unfair Saturday evening.

The 6-foot, 215-pound “kid” has power that allowed him to average 6.7 yards per carry on his way 183 yards rushing. Watson scored three times and anything less than six yards seemed almost too easy for the back.

It’s important to note Steele has two players — Caden Sterns (UT) and JayVeon Cardwell (Oklahoma State) —who will play at the next level as well. The Knights forced three Westlake turnovers but Watson kept them away with each run. He’s great at this level and only seems to get better each week. — Gerald Tracy

Forget what you know about high school football and offense, and the quarterback position — until you watch 6-foot-1 and 193-pound Tucker Horn sling the football for Graham High School.

Not only did he overshadow a monster performance from junior running back Chase Gilmore (11 rush, 141 yards, 2 TD, 12.8 YPC), he eclipsed the 4,000-yard mark this season and 6,500-yard and 70-touchdown mark during his three-year varsity career. Horn completed 22 of his 31 passes (71 percent) for 590 yards and seven touchdowns to four different receivers — and four to leading wideout Adam Groves (7 rec, 240 yards).

Horn’s performance may have been for naught, though, without the powerful, legs-consistently churning brash running style of Gilmore, the surehandedness of Groves, a speedy yet lengthy senior receiving option on the outside, or the five other receivers that helped highly-touted and expectedly moderate-scoring slugfest into a 69-41 state quarterfinal track meet. — Marcus Matthews-Marion 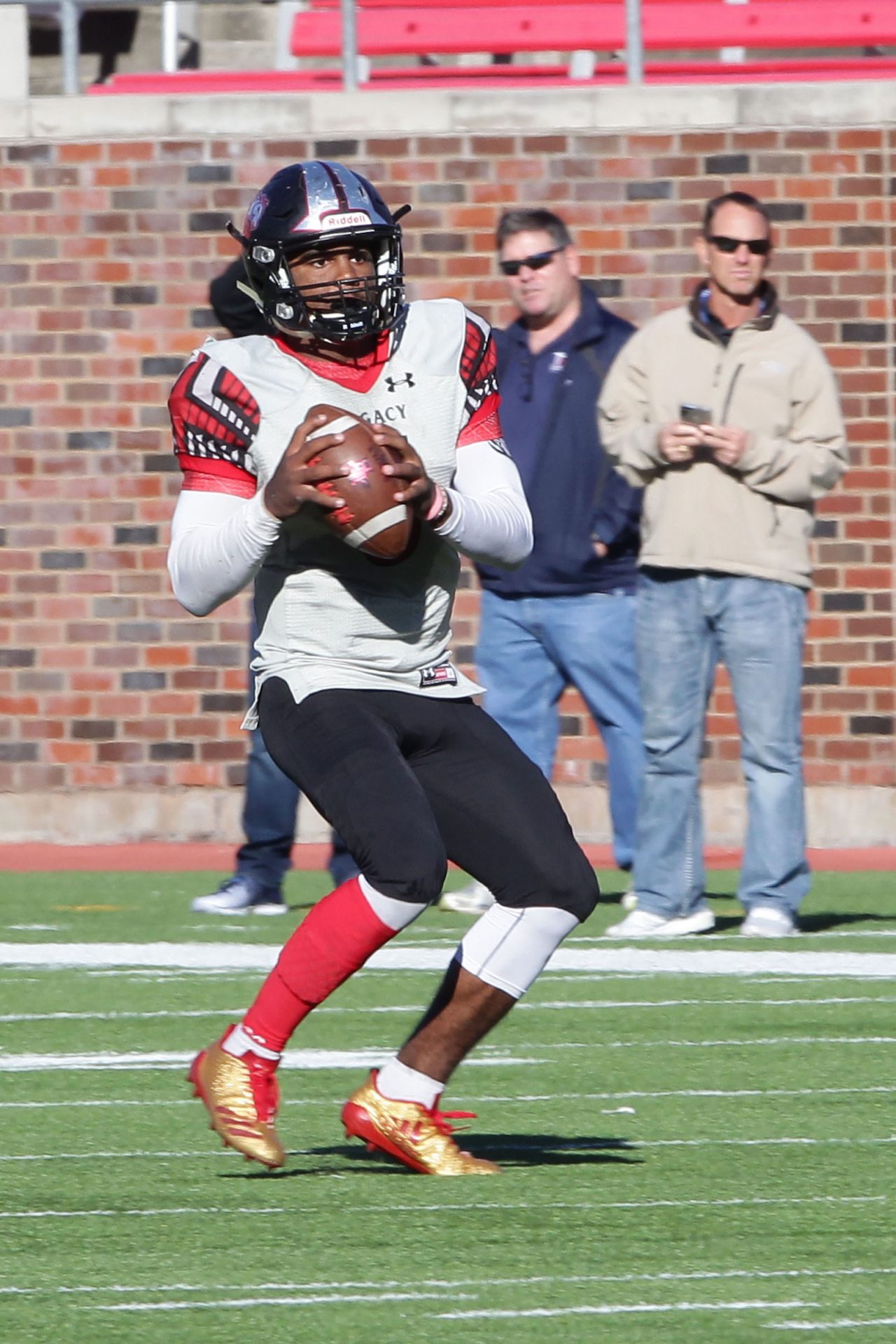 Mansfield Legacy and Frisco Lone Star High Schools provided a spectacle that came down to the wire with Legacy staving off a rally attempt by Lone Star in the winding stages of the game. While there were many performances that could get the nod for the game ball, one rose above a field of players filled with depth and athleticism.

Jalen Catalon, the Broncos’ elusive and dynamic playmaker performed in the clutch time-and-time again in this intense duel and his awareness and evasive  allowed him to find Randy Wright for a 66-yard touchdown pass that proved to be the decisive score with a little more than three minutes remaining to play — and give Legacy the 24-20 lead.

It also followed a then go-ahead 20-17 score by Lone Star the previous drive. Catalon finished with 77 passing yards and a touchdown and rushed for 49 yards and score as well.— Jonathan Rodriguez

Rockdale High School’s Torrey Locklin might be new to Texas high school football after moving to Rockdale in the spring from New Mexico, but he looked right at home under the bright Friday night lights of Waco ISD Stadium.

The quarterback led the Tigers to a 42-20 victory over the Teague Lions accounting for all but one of Rockdale’s touchdowns. Torrey Locklin was 6/17, 193 yards, 2 touchdowns and 2 interceptions, on the ground he carried the ball 29 times for 176 yards and 3 touchdowns. — Garrett Ross

BJ Foster almost singlehandedly sent Richmond Foster home, in a district battle touted to be one of the most anticipated of the weekend. Foster, a five-star safety committed to Texas, recently returned from an ACL injury that forced him to miss half the season before he exploded back onto the prep football scene.

Foster stayed solely on the offensive side of the ball and finished with 126 yards and three touchdowns and was the only Angleton player to catch a pass, with six catches for 89 yards.

Angleton was only up by three points at the half but then went on a 28-0 run that was headed by the Texas commit, who had all three of his touchdowns in the second half. Angleton now speeds on towards Manvel. The Mavericks are a well-coached and well-oiled machine and if Angleton continues to run their offense through BJ Foster, he’ll need to have another big — if not bigger performance — if he wants to lead his Wildcats to a state championship. — Tim Verghese

He scored two touchdowns — one rushing and one receiving — and displayed speed and elusiveness against a physical and speedy Huskie defense. The Stephenville running back had 154 rushing on 25 carries and 2 catches for 91 yards. — Marcus Henry

The Strawn Greyhounds claimed their first state title appearance since 2009 after coming out on top in a combined 173-point slugfest with Ellis County-based Milford High School.
Strawn was able to grab the win while reaching triple digits in large part to the bruising run game of Hodgkins. The sophomore rusher finished the night with 171 yards rushing and a whopping six touchdowns on 16 carries — while also contributing 10 tackles on defense.
Strawn’s offense has been a multi-part behemoth throughout the 2017 season, with Hodgkins serving as a fine addition of youth. Balmorhea may have quite the challenge on their hands next week, with Hodgkins being given an additional chance to shine in Texas’ biggest stage. Being only a sophomore, this likely won’t be the last we hear from him as well. — Blake Wood 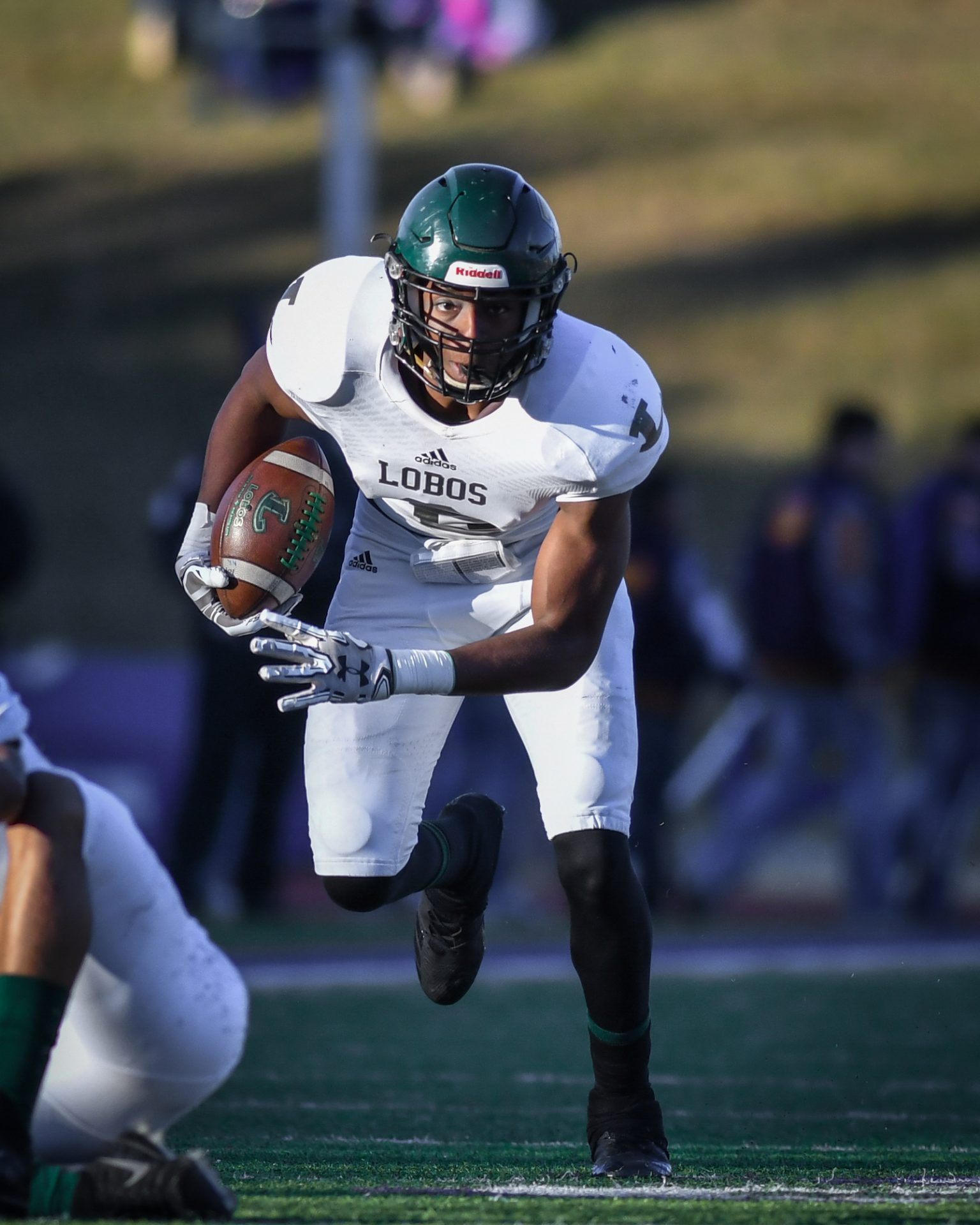 However potent and responsible for getting Longview High School to the show that was the UIL 6A Division I State Quarterfinals, it wasn’t the whole of the reason it declawed Lufkin en route to keeping its playoff drive alive. That honor belongs to sophomore quarterback Haynes King, a stable of running backs, wide receiver Kamden Perry, and an electric Lobo offense.

While King threw for 179 yards and found two receivers in the end zone for three scores — and also two defenders for interceptions — and ran for 35 yards and a touchdown, junior running back Keilyn Williams gained 88 yards and scored a touchdown on only 15 carries. Their production, as well as that of junior and senior backs Jessie Anderson (5 rush, 54 yards) and Jaquan Edwards (6 rush, 25 yards) helped the Lobos finish with 202 yards on the ground while rushing for a 6.5 yards per carry average.

Perry, the game’s leading receiver, torched Lufkin’s secondary for 115 yards and a pair of touchdowns with his 15 receptions. His State Quarterfinal performance was more than a quarter of his season receiving yard total and doubled his touchdown total — a possible coming out party for the dynamic, 6-foot pass catcher. — Marcus Matthews-Marion

Austin McCallum Can Do This – From 4-6 To State Surprise