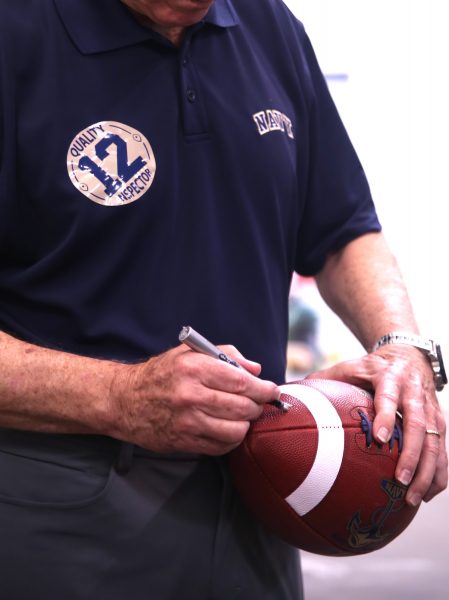 Navy has used Big Game-made footballs as its primary game ball since 2014. Big Game has also designed special edition footballs for the Midshipmen using Alternate Logo Technique (ALT) for many of their high-profile games throughout the past three years.

“The team at Big Game gets it,” said Greg Morgenthaler, Navy’s Associate Athletic Director for Equipment Operations.  “Not only do they consistently deliver the best performing football on the market but they push the envelope of design to help us brand the Navy Football program.”

Former U.S. Naval Academy quarterback (1961-63), Heisman Trophy winner and College Football Hall of Famer, Roger Staubach, personally tested and approved each football at the Big Game USA football factory before the footballs are sent to the team in Annapolis, Maryland.

“Having Roger Staubach visit our facility and personally give each 2017 Navy game football his stamp of approval is such an honor,” said Chris Calandro, Big Game USA founder.

While adhering to NCAA specifications, each handmade football was developed to the preference of the Navy offense, including the shape, leather, pattern and lace.