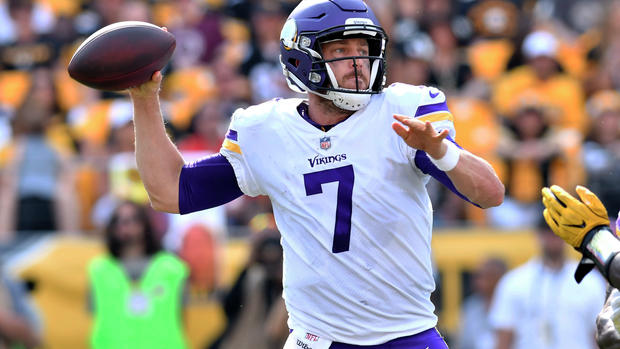 Case Keenum undoubtedly had an incredible year, helping Minnesota to a 13-3 record and NFC Championship birth.

But it’s over now, with last nights 38-7 shelling of the Vikings, the team is looking for answers. That search will start at the position most important – quarterback.

The Abeline-native has had a tough career, but the big year in 2017 will surely bring him a large contract from someone out there. From the outside, that answer may be simple, in Minnesota. However, here are three reasons Keenum will end up in New York.

Shurmer has already taken the head coaching job in New York. He’s a huge reason Keenum played so well down the stretch in Minneapolis. The quarterbacks talent, matched with familiarity in Shurmers’ scheme should prove New York the best fit for him. Shurmer will definitely attempt to recruit Case Keenum from Minnesota and it’s likely the Giants can offer more money.

2) If you have more than one, you don’t have any

Minnesota played well despite losing Sam Bradford and not knowing when, or if, Teddy Bridgewater would be healthy. Now, all three of the quarterbacks who played for Minnesota in 2017 will have chances to go elsewhere. It would seem the Vikings will try their best to keep the former University of Houston quarterback. But if they can’t pry him away from Shurmer, they have some other options. Bridgewater led a much worse Minnesota team to 11-5 two years ago. But the future health prospects of both him and Sam Bradford would scare most teams. Keenum seems to enjoy Minnesota, but does he enjoy not having trust and being “the guy”?

The Giants are looking to move on from Eli Manning, that’s no secret. Manning is on the downturn of his career and was even benched at one point. Other than Manning, though, the offense has weapons. The idea of throwing to Odell Beckham Jr. and Sterling Shepherd in the Big Apple would entice almost anyone.

At this point, it’s all speculation as to what the Vikings will do. But this isn’t college, the players have options to leave, if they want. Keenum has not shown anyone what he may, or may not, do this offseason. Regardless, he’s proved he has the talent to lead a team. The question remains, which team will he lead?